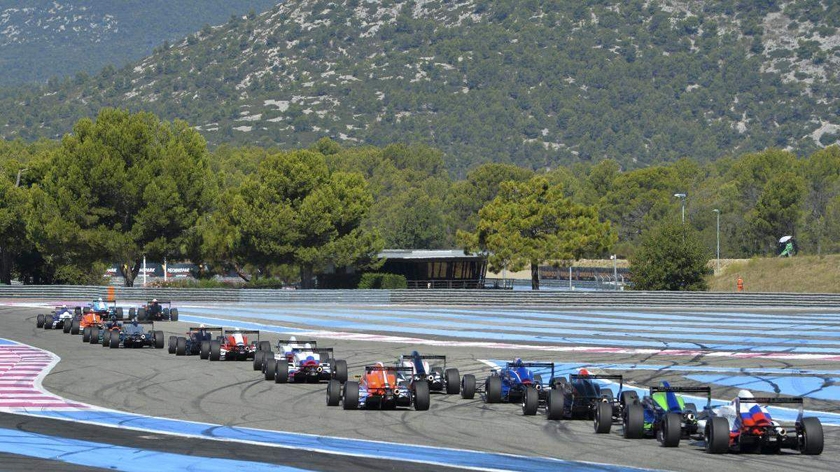 This weekend, the Formula Renault Eurocup will be back in action at Circuit Paul Ricard. Following the summer break, the drivers will return to competition at the eighth meeting of the season. The battles promise to intensify on the same track that will host the 2018 Formula 1 French Grand Prix.

Robin Frijns, Stoffel Vandoorne, Pierre Gasly, Nyck de Vries, Lando Norris…In the last five editions at Circuit Paul Ricard, the future champion in the Renault Sport Racing school of champions was victorious in the South of France. This year, ten drivers are still in the hunt as the series heads to Castellet. Who will come out on top ?

Is Fenestraz on his way?

With three wins and nine podium finishes in the last ten races, Sacha Fenestraz (Josef Kaufmann Racing) took the lead in the Formula Renault Eurocup before the summer break.

With a 27-point lead from Robert Shwartzman (R-ace GP) and a 29-point advantage over Will Palmer (R-ace GP), the French driver will look to widen the gap. But his rivals will try to answer back, especially the Briton, who hasn’t won since Monaco.

Consistently at the sharp end of the order, outsiders Gabriel Aubry (Tech 1 Racing) and Max Defourny (R-ace GP) will try to reel in the leaders before the final races. Last year, the Frenchman scored his best result of the year at Circuit Paul Ricard and the Belgian driver finished on the podium.

However, they will have to both keep a close eye on those behind them, who have past experience at the Castellet circuit: Yifei Ye (Josef Kaufmann Racing) took a rare quadruple there in the 2016 French F4 Championship, Alex Peroni (Fortec Motorsports) won in V de V, but also Henrique Chaves (AVF by Adrián Vallés), who raced in the Eurocup last year.

Now eliminated in the race for the title, Richard Verschoor (MP Motorsport) and Neil Verhagen (MP Motorsport) both this summer won for the first time in Formula Renault NEC at Assen. The two Red Bull Junior Team drivers will try to do it again this weekend in the Eurocup.

Australia’s Thomas Randle (AVF by Adrián Vallés) made a very strong impression in his debut outings and now will look to score his first podium result. Alexey Korneev (Fortec Motorsports) and Axel Matus (AVF by Adrián Vallés) will rely on their experience at Castellet to add to their respective point tallies, which for the Mexican is still zero.

Wild cards Charles Milesi, Théo Coicaud and Michael Benyahia will be part of the R-ace GP line-up. While all three are ineligible to score points, the French squad will count on its four drivers entered for the season to try to clinch the team title as early as this weekend !