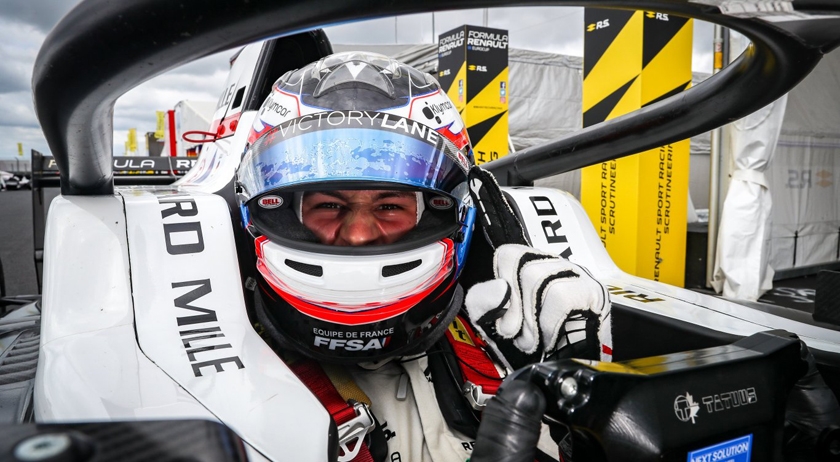 This Saturday at the Nürburgring, Victor Martins (ART Grand Prix) became the fourth different driver in five races to win this season in the Formula Renault Eurocup. Starting from pole, the Frenchman won in dominating fashion ahead of Lorenzo Colombo (Bhaitech Racing) and David Vidales (JD Motorsport), who scored his third consecutive victory in the rookie category. Sixth today, Caio Collet (R-ace GP) remains atop the general classification.

After the pole won by Victor Martins on Friday, the Formula Renault Eurocup field was back on track this morning for the second qualifying session at the future venue of the F1 Eifel Grand Prix.

Following the duel between Hadrien David (MP Motorsport) and László Tóth (Bhaitech Racing) early in the session, the pace picked up as Grégoire Saucy (ART Grand Prix), Caio Collet and David Vidales all led for a brief moment until Victor Martins went to the top of the timing screen.

The Frenchman improved several times to beat the category track record set by Sacha Fenestraz in 2017 to claim his third pole position of the season with a time of 1:54.280s. He was followed by Lorenzo Colombo, Caio Collet, Grégoire Saucy and David Vidales.

When the lights went out, Victor Martins held on to the lead ahead of Lorenzo Colombo. From fifth on the grid, David Vidales took advantage when Caio Collet suffered too much wheelspin to move up to third place ahead of William Alatalo and Grégoire Saucy.

Victor Martins quickly built a more than one-second gap to Lorenzo Colombo, who steadily pulled away from David Vidales. The Spaniard had to cope with the pressure coming from William Alatalo, Grégoire Saucy and Caio Collet before getting some breathing room thanks to their three-way battle.

Managing his pace as he broke the race lap record for the category at the Nürburgring, Victor Martins continued to see his rivals get smaller in his mirrors as he went on to score his first victory of the season and the first for ART Grand Prix in their fifth Formula Renault Eurocup race. Second place, Lorenzo Colombo made his first trip to the podium this year, while rookie David Vidales won his third Hankook Trophy in as many starts in single-seaters in his career.

Grégoire Saucy overtook William Alatalo on the final lap for fourth place while Caio Collet had to settle for sixth place ahead of Franco Colapinto (MP Motorsport), Petr Ptáček (R-ace GP) and Amaury Cordeel (FA Racing). Tenth at the finish, Paul Aron (ART Grand Prix) lost the final point on offer when he was penalised for causing contact with Tijmen van der Helm (FA Racing) when he was making his overtake move on lap 11.

Victor Martins (ART Grand Prix): "It’s a very good result following an excellent start to the weekend as the qualifying session highlighted it. I would like to thank the team for giving me an exceptional car for the race. It let me manage my pace calmly to first widen the gap, then concentrate on my driving and ensure ART Grand Prix its first victory in the category. The target will be to do exactly the same thing tomorrow and that will require above all a good start off the line like I did today!"

Lorenzo Colombo (Bhaitech Racing): "This podium is really good after a start of the season not up to our expectations. We think we understand what hasn’t worked so far and the team has done a great job this week to bring us back to the top. We’ve made a lot of progress with the car and this is reflected in our performance. We still have some work to do to catch up with the ART Grand Prix cars, but if we keep this up, we will definitely be able to fight at the sharp end of the order!"

David Vidales (JD Motorsport): "It’s a good result as far as the championship is concerned. We didn’t have the race pace of Victor and Lorenzo, but we were able to benefit the opportunities in the opening lap and maximize our potential to go for this third place. I am learning this circuit where overtaking is difficult, so I approached this race with the goal of getting a good start to gain as many positions as I could. That was the key today. I also want to thank the job for the team done, especially as we didn’t have much time to get our bearings with the rain on Thursday. Now we have to continue to work to be closer to the front tomorrow."

Mehr in dieser Kategorie: « Victor Martins on pole at the Nürburgring
Nach oben