Victor Martins on pole at the Nürburgring 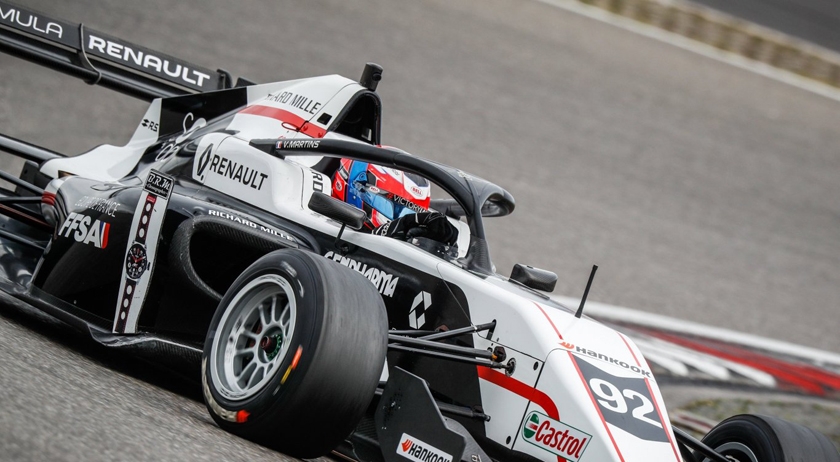 Victor Martins (ART Grand Prix) becomes the first driver to claim a second pole position this season in the Formula Renault Eurocup. With the fastest lap in the qualifying session setting the starting grid for the Sunday race, the Frenchman will line up ahead of the leader in the general classification Caio Collet (R-ace GP) and his team-mates Grégoire Saucy and Paul Aron on the circuit that will host the future F1 Eifel Grand Prix.

After a month-long pause since the Imola round, the Formula Renault Eurocup was back in action with six sessions spread out over Thursday and Friday prior to the first qualifying session.

Victor Martins on Thursday was quickest right off the transporter with a time of 1:55.098s in the first session. After trailing team-mate Grégoire Saucy in the second one that concluded in the rain, the Frenchman was back on top of the timing screen in the next two sessions in wet conditions.

The collective tests continued Friday morning under cloudy skies. Leader in the general classification, Caio Collet led the way with a time of 1:54.926s despite the late improvements of Victor Martins and David Vidales (JD Motorsport). Victor Martins, however, answered in the final session with the best time in the collective tests of 1:54.921s ahead of David Vidales and Caio Collet.

A work of ART

After posting the best time in five of the six sessions, ART Grand Prix kept the momentum going in qualifying.

While Bhaitech Racing’s Formula Renault FR-19s with Vicky Piria and László Tóth dominated the session in the early going, Grégoire Saucy was quickest nine minutes from the chequers before being dislodged by Victor Martins.

Improving three times, the Frenchman clinched the pole with a lap of 1:54.808s ahead of Caio Collet. The Renault Sport Academy driver was the only one to break up the stranglehold of ART Grand Prix, whose two other drivers Grégoire Saucy and rookie Paul Aron locked out row two ahead of William Alatalo (JD Motorsport) and Lorenzo Colombo (Bhaitech Racing).

On Saturday, the competitors will contest the second qualifying session beginning at 10h40, which will determine the starting grid for the first race of the weekend at 15h35.

Victor Martins (ART Grand Prix): "We did a great job this summer with the team and my team-mates to analyse everything that happened at Imola. We started in the best possible way yesterday and we continued today to end up with a very good car. We took pole position for Sunday and we will now concentrate on tomorrow. The target is always to do better, so we will have to stay focused and maximise our potential!"

Caio Collet (R-ace GP): "Starting on the front row is never a bad thing, but I still think the gap to Victor is a little too much. I think Victor is really strong on this track, so we will have to keep improving for tomorrow. We have been working well with the team since Thursday, we seem to be fast in all conditions, so I am sure that everything will go well this weekend!"

Grégoire Saucy (ART Grand Prix): "The team put in a solid performance in qualifying. My goal was to get into the top five as I was there consistently in all the collective tests. I am thus delighted with P3, but we still have to give it all we’ve got in the race to aim for a podium this weekend!"

Paul Aron (ART Grand Prix): "Qualifying was decent and I have to give credit to the team as they did a phenomenal job on all three cars. I would like to thank them for that, especially as the weekend is looking good. Since yesterday, I have been gradually getting closer to Victor and I managed to put together my lap to get this spot on the grid. The hardest part is still to come in the race, but my main target is to improve and to be as close as possible to Victor. Everything is going well so far and we have a solid pace, so we have all our chances to finish on the podium tomorrow!"