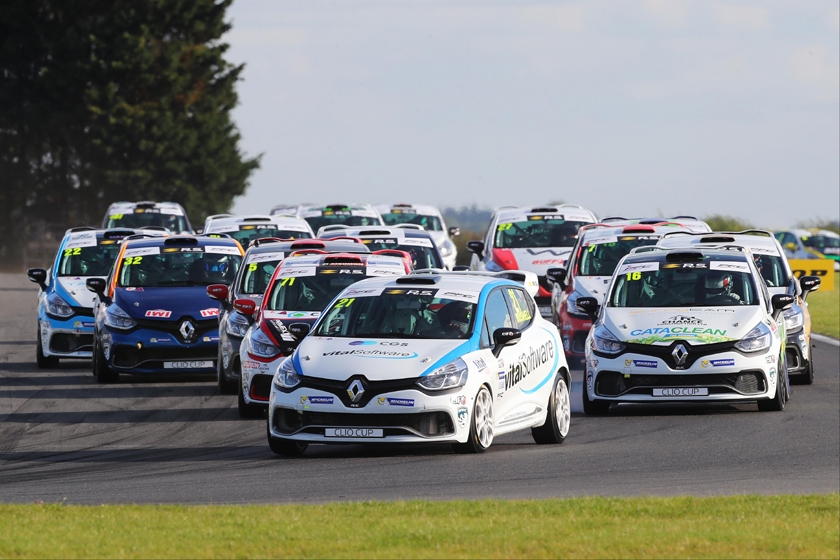 The maths are simple: if Bushell stretches his current championship lead of 98 points to 137 at Rockingham he will be the 2017 Champion.

A maximum of 68 is possible from Rockingham’s ‘double-header’ (32 per win; another two per fastest lap) with only 136 available from the season’s final four races, at nearby Silverstone and then Brands Hatch in Kent…

Bushell can’t win it in Rockingham’s first race but he can in the second – being held on the Sunday along with the latest rounds of the British Touring Car Championship and being broadcast live across the UK on ITV4. The title would be his second after he won it in 2014 (then, as now, with Team Pyro).

Winning it this early, with four races still to go, would also be quite a feat. Only one driver, Dave Newsham in 2010, has won the title so speedily before. Significantly Newsham is one of a dozen or more ex-UK Clio Cup drivers now starring in the BTCC…Furthermore arriving at Rockingham Bushell is on a roll… He’s won the last four races to make it seven out of 12 and if he adds victories in both races at Rockingham he will also equal the most consecutive wins record of six set in 2005 by Jonathan Adam (the reigning British GT Champion).

So who can stop him?

Pattison (twice), Coates, Dorlin and Colburn are the other race winners so far; incredibly triple Champion Rivett has still to register a win in 2017. He holds the record for most wins around Rockingham – three, along with Bushell and 2016 Champion Ant Whorton-Eales (also now in the BTCC).

In the thick of it!

16-year-olds to debut/lap records under threat…

Meanwhile Rockingham marks the debuts of two of the youngest drivers in championship history, 16-year-old newcomers Bradley Burns (Farnham) and Zak Fulk (Guildford) who both line up with Pyro.

Making Rockingham unique is the fact it is the only anti-clockwise circuit on the calendar, its configuration 50 per cent made up of the venue’s banked oval track, the other half a twisting infield section. Its track surface is also highly abrasive and the new Michelin tyre the UK Clio Cup has switched to for 2017 could come into its own – indeed there have been new qualifying and race lap records aplenty so far this season.

Where and when to watch

The Renault UK Clio Cup’s drivers will first be on track at Rockingham on the Friday (25 August) for two timed test sessions, allowing them to fine-tune their cars to the circuit’s characteristics. At 11:20 on Saturday comes the crucial half-hour timed qualifying session which will determine their starting grid positions for the two races (rounds 11 and 12 of the championship). Round 11 is also on the Saturday, at 16:10, and round 12 on Sunday, at 13:00. Both races are 14 laps in duration. As ever the event will be broadcast live on the Sunday on ITV4, from 10:45-17.30.