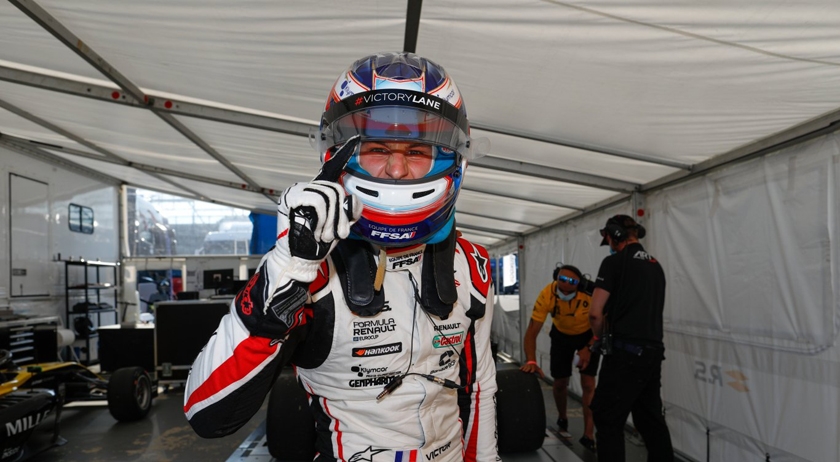 Victor Martins claims the first pole position of season 50 of Formula Renault at the Autodromo di Monza. The French driver beat the track record for the Formula Renault Eurocup he set on Tuesday with a lap of 1:47.112s to take his 11th pole, and seventh consecutive, in the category as well as the first for ART Grand Prix in its first qualifying session in the category since 2003.

Following a day off, the Formula Renault Eurocup was back in action at the Autodromo di Monza today to truly kick-off the 2020 season

Colapinto and Alatalo lead the way in collective tests

Franco Colapinto (MP Motorsport) was the driver to beat in the first collective test session. The Argentinean moved to the top spot 12 minutes from the end before improving his best lap four times, clocking in at 1:47.187s. He was followed by his team mate and Renault Sport Academy rookie driver Hadrien David (MP Motorsport). Amaury Cordeel (FA Racing), Tijmen van der Helm (FA Racing) and Victor Martins (ART Grand Prix), who had led the way for most of the session, completed the top five.

Victor Martins thought he would get revenge in the afternoon by bumping Franco Colapinto from the lead 15 minutes before the chequered flag, but William Alatalo (JD Motorsport) did even better in the final sprint. With a lap of 1:47.490s, the Finnish rookie outpaced the Frenchman, Alex Quinn (Arden Motorsport), Caio Collet (R-ace GP) and Michael Belov (M2 Competition).

Victor Martins picks up where he left off

The first qualifying session of the year set the grid for race two scheduled for Saturday in order to preserve sporting fairness in case of an incident in Q2 tomorrow.

After a very open beginning, Victor Martins went to the top of the timing screen midway through the session. Caio Collet bested his time and the two former Renault Sport Academy partners went head-to-head until the Frenchman took the lead with four minutes to go. Victor Martins then put the finishing touches to his final effort by setting a new lap record for the category in 1:47.112s.

Making full use of the new engine mapping introduced this year to harness all the potential of Castrol’s high-performance products, Victor Martins was 0.3s quicker than the Brazilian. Behind him, Amaury Cordeel posted the best qualifying result for Fernando Alonso’s FA Racing team, finishing third ahead of rookies William Alatalo and Alex Quinn. With Franco Colapinto completing row three, six different teams will be represented in the top six places on the grid on Saturday. The race promises to be all the more animated as the top 15 all qualified in the same second.

Tomorrow, the second qualifying session for the field will begin at 9:00. This will set the grid for race one of the season scheduled to be run just four hours later.

Victor Martins (ART Grand Prix): "There’s nothing like pole position to start the season! The team has been doing a great job since practice and we’ve made good progress on all fronts. As I had the best possible car in qualifying, I just had to do the rest. My experience helped me a lot and I used the slipstreaming to complete a perfect lap at the end. Just like me, ART Grand Prix is back even stronger than before! We will now try to maximise our potential by staying focused for qualifying 2 tomorrow!"

Caio Collet (R-ace GP): "We found a good set-up for qualifying and I’m really happy with our progress even if we have to make up the 0.3s deficit on Victor. He has done a great job with his team, so it’s our turn to work harder to get ahead of them tomorrow. However, this second place is an excellent starting position on a circuit like Monza and I am quite confident because I think our race pace is better than in qualifying."

Amaury Cordeel (FA Racing): "I’m happy with my performance as I’m going to start from row two for the first time in the Formula Renault Eurocup. We were still missing a little something, especially in sector one, in order to have a go at the pole, but third place is nevertheless very good. Monza is often unkind to the pole winner, so let’s see what happens tomorrow and on Saturday, we could be racing for victory!"

William Alatalo (JD Motorsport): "I’m not totally satisfied with this result, if I am honest. I was aiming for first place, so we still have to make progress to do better. However, I put that into perspective by saying that this was only my first qualifying session in the Formula Renault Eurocup. It’s not a bad start, but we can be quicker and I’m confident because the team won here last year!"