Gabriele Torelli wins in a Thriller at Monza 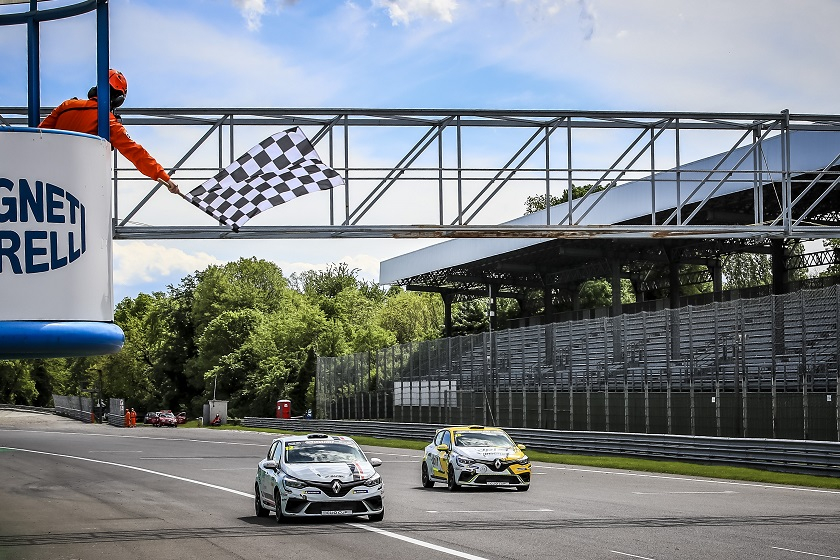 Gabriele Torelli (Faro Racing) has become the third different winner in just four races this season in the Clio Cup Europe. Fourth on the starting grid, the Italian driver passed David Pouget (GPA Racing) for the lead on the final lap. Anthony Jurado (Milan Compétition) completes the podium while Kévin Jimenez (GPA Racing) is first in the Challengers Cup and Denis Bernardi (GPA Racing) takes top honours in the Gentlemen Drivers Cup. Michelin’s rain tyres proved to be the right choice in qualifying. Nicolas Milan (Milan Competition) started on slicks on a still wet track despite the sunshine but returned to the pits to change to grooved tyres and nipped the pole from Anthony Jurado and Filippo Berto (Oregon Team), who had led for most of the session.

At the start, Nicolas Milan held on to the lead ahead of Anthony Jurado and David Pouget, who moved from fifth on the grid to third. Federico Scionti (Scuderia Costa Ovest), Gabriele Torelli and Filippo Berto followed close behind, all ahead of a busy midfield.

The top six quickly broke away from the rest of the field and used the draft to swap positions several times. Anthony Jurado took the lead on lap two before being overtaken by David Pouget two laps later. Gabriele Torelli also took advantage of this situation to follow the Frenchman while Nicolas Milan and Simone Di Luca (Faro Racing) had to retire at the halfway point of the race.

Anthony Jurado collected his second podium result of the weekend in finishing third ahead of Marc Guillot (Milan Compétition), who went from 23rd position to fourth in eight laps after making the wrong tyre choice this morning in qualifying.

Fifth at the chequers, Filippo Berto received a ten-second penalty for crossing the white line at the pit exit. Federico Scionti inherited fifth place and Kévin Jimenez the win in the Challengers Cup. Eight overall, Denis Bernardi was first in the Gentlemen Drivers Cup. He was followed in the top ten by Lorenzo Nicoli (Progetto E20 Motorsport) and Massimiliano Danetti (PMA Motorsport).

In the Clio Cup Europe general classification, David Pouget extends his lead as he is now 40 points ahead of Anthony Jurado and 47 ahead of Nicolas Milan. His teammate Kévin Jimenez has done the same in the Challengers Cup while Denis Bernardi joins Lionel Viguier atop the Gentlemen Drivers Cup classification.

Overall race winner Gabriele Torelli also won in Group A ahead of the Frenchmen Anthony Jurado and Marc Guillot. Thanks to his strong showing on his birthday weekend, Anthony Jurado leaves Monza with a six-point advantage over today’s race winner.

While he didn’t take the victory in the Challengers Cup of the Clio Cup Europe due to his penalty, Filippo Berto managed to keep the lead in Group A against Lorenzo Nicoli and Giuseppe Cirò (Progetto E20 Motorsport). His victory today sees him close the gap to four points from Lorenzo Nicoli.

Quinto Stefana (Oregon Team) was also penalised post-race but still won in the Gentlemen Drivers Cup ahead of Sebasti Scalera (Milan Compétition) and « Due » (Oregon Team). He now has a seven-point lead from fellow Italian Alessandro Sebasti Scalera ahead of the next meeting for Group A at Misano (4-6 June).

The Clio Cup Europe competitors will be back in action next Thursday evening for the first free practice sessions of the third meeting of the season at Circuit Nevers Magny-Cours (6-9 May). Nearly 40 drivers entered in Group B and D will be ready to battle in Burgundy.