Lego Plus a Touch of Boldness (Episode 3) 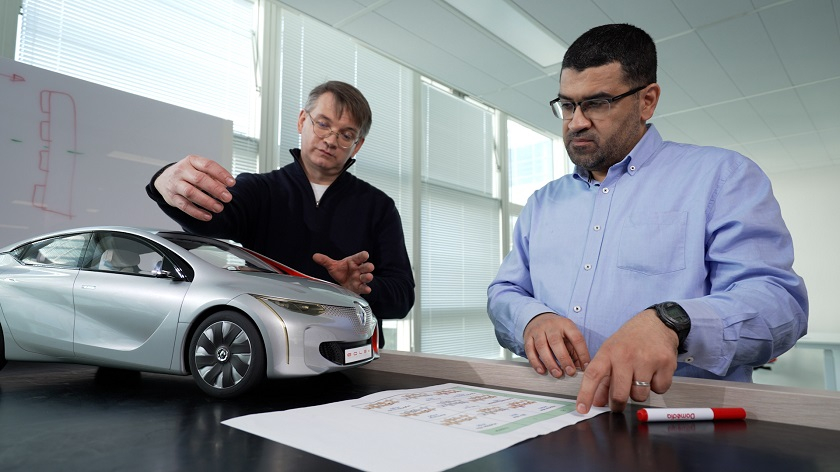 Using its expertise in electric vehicles, its experience in Formula 1 and with the enthusiasm and passion of its engineering, development and control teams, Renault has developed the innovative hybrid E-TECH powertrain. What is less well known is that it was invented and developed in a way that is both unusual and highly inspiring. Nicolas Fremau, Renault's Hybrid Architecture Expert, looks back at the final decisions that gave the E-TECH engine the shape it has today, under the bonnet of the first models launched.

After the first prototyping runs which validated the functioning of the E-TECH system - born from a simple LEGO model a few months earlier - the development teams reached a first important stage: the presentation of a ‘real’ vehicle within the time limit of 18 months set by Gérard Detourbet after he gave his agreement for the development of this hybrid technology. It was under the bonnet of a Dacia Sandero that a first version of the E-TECH engine made its ‘semi-public’ debut at the 2012 Innov'Days, an event for the Group's employees to learn about the latest technological innovations under development.

"The E-TECH technology is really unique because it is extremely simple. Many people wondered if it was viable. We proved it was!" Nicolas Fremau, Renault's Hybrid Architecture Expert

At the same time, Renault was preparing to meet a government challenge: to develop a car capable of consuming less than 2 litres/100 km. This would be the role of the EOLAB prototype. The mixed teams (engineers, designers, experts in aerodynamics, etc.) led by Laurent Taupin worked on three main areas: lightening the vehicle's platform and body, its highly advanced aerodynamics and the most economical drivetrain possible. A meeting with the E-TECH motorisation development teams was inevitable.

"The EOLAB/E-TECH combination soon became the obvious solution, as the complementarity between the search for a lighter vehicle and the need to apply it to the powertrain via an innovative technology was necessary to complete the project. This gave us two complementary ways of fulfilling Renault’s requirement, in other words, the provision of a smart, frugal solution accessible to all." Laurent Taupin, EOLAB Project Leader

The EOLAB prototype was unveiled at the 2014 Paris Motor Show. At the same time, journalists were invited to try out the ‘demo-car’ version on the Mortefontaine circuit: a test of fire for the E-TECH motorisation.

EOLAB was keeping its promises and the feedback was very positive, with journalists seduced by a prototype that beat fuel consumption records (1 litre/100 km in the end!) without neglecting its dynamism (9.2 seconds for 0-100 km/h) and road holding. However, Nicolas Fremau and the development teams were not entirely satisfied: "We had to succeed in accelerating the start of the combustion engine to have a very reactive transmission and to find the pleasure of instantaneous driving with the pedal that we have with electric cars."

This required action at the top end of the drivetrain. The solution was to add a fourth gear to the dog clutch transmission connected to the combustion engine, which originally had only three. Better still, this fourth gear allowed the main electric motor to be completely disconnected when not in use - typically on motorways. This cancels out its drag and saves about 1 kW, or 3 to 4% of fuel consumption. "On the motorway, driving became more comfortable and more economical" says Nicolas Fremau.

A LITTLE TOUR IN F1

The development of E-TECH technology continued, in direct liaison with the Renault Sport Racing teams. It should be noted that Formula 1 had been moving towards electrification since 2009 with KERS and that in 2014 it introduced a new generation of V6 hybrid engines. On the track as well as on the road, the desire of the engine manufacturers is the same reducing consumption and improving fuel efficiency are at the heart of their objectives. These are the secrets of energy management that engineers working on the E-TECH engine have sought out from their counterparts at the Renault F1 Team, the forerunner of today's Alpine F1 Team.

Only one piece was missing for the puzzle to be assembled: the choice of the combustion engine. This was to be a naturally aspirated 4-cylinder engine from the Alliance's engine bank, the HR16. This required a great deal of adaptation work, particularly in terms of its operating cycle, but it allowed the innovative dog clutch transmission imagined in LEGO by Nicolas Fremau to reach its full potential. It was also a response to the search for cost optimisation for an E-TECH motorisation intended for mid-range vehicles.

Today, the E-TECH engine is a reality, offered in a ‘simple’ hybrid version on Clio, Captur and Arkana and in a plug-in hybrid version on Captur and Mégane. For Nicolas Fremau, it's like a dream come true: "We started with a small seed, we had the engineering department take on the concept and it has now been transformed into a complete range."

It is indeed the end-point of a slightly surreal tale born from a LEGO model and the ingenuity and perseverance of a devoted team which didn’t throw in the towel when the going got tough. This was a team that knew how to pull together and create a competitive spirit that gradually gripped the whole company. This was vital because they were playing for high stakes.

“It was a very risky gamble for sure. But gradually the whole company ended up adopting the idea: the product and vehicle projects teams, right up to top management. Lots of staff in engineering and beyond got fired up for this project generated by lots of self-motivation. That’s what makes a company worth its salt too. The E-TECH powertrain was a slightly crazy success that we can all be proud of” concludes Nicolas Fremau.

Mehr in dieser Kategorie: « Gabriele Torelli wins in a Thriller at Monza The First Inter-Group Battles at Magny-Cours »
Nach oben