The pace will accelerate at Monza for the Formula Renault Eurocup! 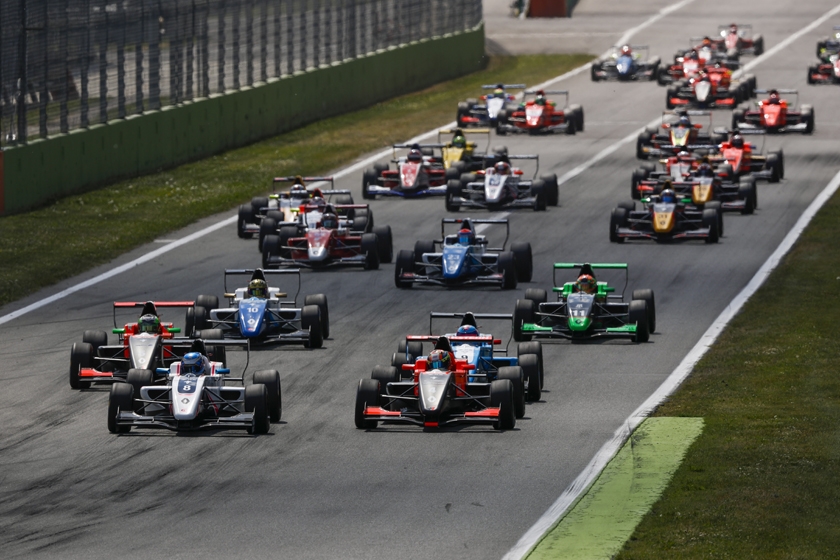 In the aftermath of the season opener at Circuit Paul Ricard, the Formula Renault Eurocup heads to Monza this week (April 20-22).

On this historic circuit, the competitors will either try to confirm or reverse the early trends that surfaced in the South of France.

Legendary Monza is one of the most prestigious meetings on the calendar. On the same track that has hosted the Formula 1 Italian Grand Prix since 1950; the drivers will enjoy a day of collective tests on Thursday to acclimatize to the innumerable challenges of the "Temple of Speed": slipstreaming, low downforce, hard braking and tricky kerbs among many others!

The leader in the general classification after his two pole positions and race win at Castellet, Max Fewtrell (R-ace GP) will try to extend his advantage with a similar weekend on the circuit where he scored his first podium results in Formula Renault.

He will, however, have to contend with Yifei Ye (Josef Kaufmann Racing), who also finished on the podium in both races in France. The Chinese driver will use all of his prior Monza experience to try to take the overall lead from the British member of the Renault Sport Academy.

The two leaders will also have to pay attention to the five rookies that are nipping at their heels!

The first American race winner in the category since Scott Speed in 2004, Logan Sargeant (R-ace GP) has shown he will be in the fight this year. Like him, Christian Lundgaard (MP Motorsport) and Oscar Piastri (Arden Motorsport) will too want to confirm their strong season-starting form. Already winners at Monza in F4, the Renault Sport Academy driver Victor Martins (R-ace GP) and Italian Lorenzo Colombo (JD Motorsport) also figure among the contenders for the top step of the podium.

Ready to raise the pace

The chase group is led by Thomas Maxwell (JD Motorsport). Driving for the only Italian outfit in the field, the Australian will want to score a top result for his team here where he had his best finish in 2017.

After a lacklustre opening round, Alex Peroni (MP Motorsport), Richard Verschoor (Josef Kaufmann Racing), Max Defourny (MP Motorsport) and Neil Verhagen (Tech 1 Racing) need to quickly bounce back to stay in contact with the leaders on a track they all know quite well. A year ago, the member of the Red Bull Junior Team created a surprise in taking top honours among the rookies in only his second start in Europe!

Coming off their first points finishes, Alexander Smolyar (Tech 1 Racing) and Charles Milesi (R-ace GP) will aim to keep the momentum going. While the SMP Racing protégé will make his Monza debut, the Frenchman will return to the track where he scored his first open-wheel victory.

A compact field on the lookout

And finally, Sami Taoufik (Arden Motorsport), Clément Novalak (Josef Kaufmann Racing), Xavier Lloveras (AVF by Adrián Vallés) and Vladimir Tziortzis (Fortec Motorsports) all hope to do better in taking advantage of the smallest opportunity to score their first points as soon as possible!

By the numbers 2 With his win at Castellet, Max Fewtrell joins Max Defourny for number of wins in the Formula Renault Eurocup.   6 teams and 14 drivers have already scored points this year.  43 After the first two races of the season Max Fewtrell leads in the general classification with 43 points. Since the introduction of the new points scale in 2011, Carlos Sainz (43), Daniil Kvyat (50), Matthieu Vaxivière (50), Louis Delétraz (50) and Lando Norris (43) did as well or better. As of today, only Lando Norris has gone on to convert his strong start to the season into a title. 192,1 kph. Average speed of the pole position won by Robert Shwartzman last year. 1973, Patrick Tambay won the first race of the Formula Renault European Challenge at Monza. Four years later, the Frenchman was in F1. He would be copied by Alain Prost, Didier Pironi, Felipe Massa, Kamui Kobayashi and Pastor Maldonado.

Mehr in dieser Kategorie: « A stout field for Lyon-Charbonnières Renault SYMBIOZ on show at the “Salone del Mobile di Milano” from 16 to 22 April 2018 »
Nach oben