A stout field for Lyon-Charbonnières 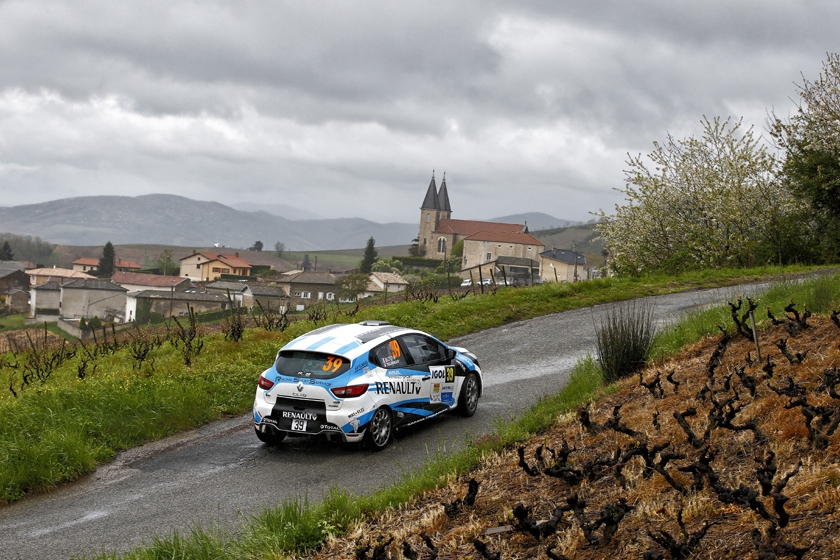 Contested on the roads of the Rallye Lyon-Charbonnières-Rhône (April 19-21), the second round of the Clio R3T Trophy France will feature an even larger field, with 14 crews on the entry list.

Winners on the Rallye Le Touquet Pas-de-Calais, Florian Bernardi and Victor Bellotto will look to confirm their supremacy.

Following the opening round of the season on the fast and slippery roads of the France’s northern coast, the Clio R3T Trophy is in for a change of scenery in the Lyon region. A classic round in the French Championship, the ‘Charbo’ is well-known for its technical stages on roads that generally have a high level of grip.

With a service park based in Villefranche-sur-Saône, the 13 special stage, 226 timed kms rally route will head through the Monts du Lyonnais region on day one, before passing through the Beaujolais vineyards on day two.

Among the 116 crews entered, 14 Clio R3Ts will battle in the Trophy organised by Renault Sport. Obviously, all eyes will turn towards the overwhelming favourite Florian Bernardi. The runner-up and top Junior driver in the 2017 Clio R3T Trophy France got his campaign off to a perfect start in dominating round one and wants to build a big lead to serenely take on the rest of the season.

Runner-up to Bernardi in round one, Olivier Delaporte chose to assure second place for his debut outing in the Trophy. On roads that are more familiar to him, the Burgundy-based Gentleman driver is well decided to heap as much pressure as he can on his young rival.

After wresting away the podium and Junior win from Guillaume Jean, Thibaut Poizot also wants to be a part of the fight for the win. Surprised by his performance level in his competition debut, Jean can now raise his ambitions. As he continues to learn the car, Mathieu Walter will try to close the gap to the category leaders, as will William Pitot who returns after a season away from the sport.

A five-time finisher in the top five in 2017, Damien Tozlanian will be looking to bounce back after a lacklustre Touquet showing. A newcomer to the Clio R3T this year, Jérôme Aymard will be another one to watch on the roads he knows very well.

Following an excellent start to the rally that saw her run as high as second, Sara Williams is skipping this round due to family reasons. The British driver will return for the Rallye du Rouergue. Separately, José Javier Perez will this time be the only representative of the Spanish delegation and should do better than he did on the Touquet on roads that are more similar to those on Spanish rallies.

Five drivers will be making their debuts in the Clio R3T Trophy France. The most prominent will be Boris Carminati, who was a standout in the days of the Clio Cup Rally category in finishing third overall in 2006. Even though he hasn’t raced much the past few years, the native of Cévenol will undoubtedly be a contender.

At the start of the last three editions of the ‘Charbo’, Dominique Patenotte returns, as does Yann Mogno. Winner in the R3 category on the Tour de Corse last year, Florent Joly will make his Trophy debut, as will Julien Brégeon who will be behind the wheel of the Clio R3T for the first time.

The duel that began on the Touquet between Manu Guigou and Cédric Robert will continue at Lyon-Charbonnières. Not competing in the Trophy, these two seasoned veterans will battle for the R3 class victory. On his home rally, Robert’s desire for revenge will be increased tenfold!