A pole hat trick for Fenestraz at Spa-Francorchamps 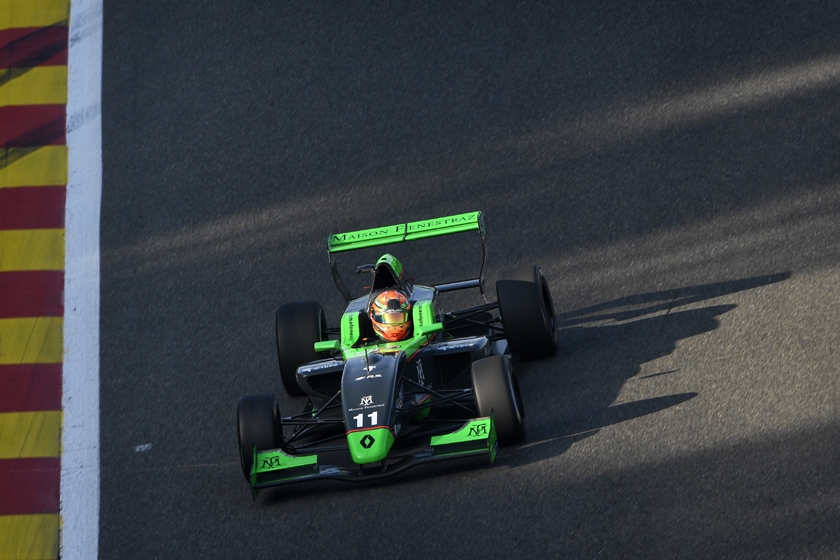 The Frenchman got the better of his closest rivals Robert Shwartzman (R-ace GP) and Gabriel Aubry (Tech 1 Racing) to become the first driver to score three poles in the same meeting. Tomorrow, he will try to become the first pole winner to win at Spa since Arthur Pic did it on May 1, 2010.

In the clear and crisp conditions, the R-ace-GP drivers came out strong before Tech 1 Racing answered back. At the mid-way point in the session, Robert Shwartzman took the advantage before Gabriel Aubry kicked off the final sprint. The Frenchman set best in 2:17.237s ahead of Yifei Ye (Josef Kaufmann Racing), Will Palmer (R-ace GP), Sacha Fenestraz and Robert Shwartzman.

The first qualifying session determined the starting grids for Saturday. Sacha Fenestraz led the way in Group A with a lap of 2:17.317s, which none of his rivals in Group B could better, with Robert Shwartzman stopping the clock in 2:17.570s.

Established according to the second best laps, the start grid for race 2 will also be led by Sacha Fenestraz. The French driver will find Gabriel Aubry by his side on row one. Yifei Ye, Robert Shwartzman, Max Fewtrell and Max Defourny complete the next two rows. Will Palmer will once again start ninth and Daniel Ticktum 18th.

The Frenchman makes it a hat trick

Sacha Fenstraz dominated once again in Q2. While Robert Shwartzman got the better of Gabriel Aubry for 0.2s, Sacha Fenestraz posted a time of 2:17.407s to take his eighth pole of the season.

On Sunday, the Frenchman will start ahead of Robert Shwarztman, Gabriel Aubry, Will Palmer and Max Defourny. Starting sixth, Max Fewtrell will be the highest placed rookie. The Briton will line up eight spots ahead of his closest adversary, Daniel Ticktum.

Sacha Fenestraz (Josef Kaufmann Racing): “It was an excellent Friday; only the best time in practice was missing to make it a perfect day! It was complicated this morning and we were focused on the points… We ended up with the three poles, without even having to use the draft. It’s great and I wasn’t expecting it at all! I am keeping the importance of being on pole at Spa in perspective. I saw that only 27% of pole winners have gone on to win since 2000. This year we might have a small advantage because we will start from the pit straight. The goal will be to aim for the podium.”

Robert Shwartzman (R-ace GP): “After my horrible weekend at Circuit Paul Ricard, the race for the title has become more difficult and now I have nearly nothing to lose. In starting second twice, I have a good shot to win. I will be aggressive and will take my chance. With three races on the programme, I have time to analyse and choose the best places to overtake. Today, our Q1 was a little disappointing, but I believe our race pace is once again better than that of Josef Kaufmann Racing. We have to see how it goes at turn one and who survives.”

Gabriel Aubry (Tech 1 Racing): “The day got off to a good start. I was confident straight away where usually it takes me some time to get on pace. We could’ve done better in qualifying, but we didn’t quite manage to get the right tyre temperature. We didn’t get the result we had hoped for, but we came up just 0.02s short of the best time in the group in Q2. There should be some terrific races. Nothing is over just yet and I know that we have the potential to win. It will be our only goal tomorrow.”

Yifei Ye (Josef Kaufmann Racing): “This morning, our rhythm was similar to that which saw me finish on the podium at Paul Ricard. This momentum continued in Q1 with the second best time of my group on the two best laps. I was full of confidence, but a tyre issue suddenly stopped my progression in Q2. I am not at all worried for the races tomorrow. I will try to get good starts and pass the drivers ahead of me to significantly reduce the gap to the best rookies in the general classification.”