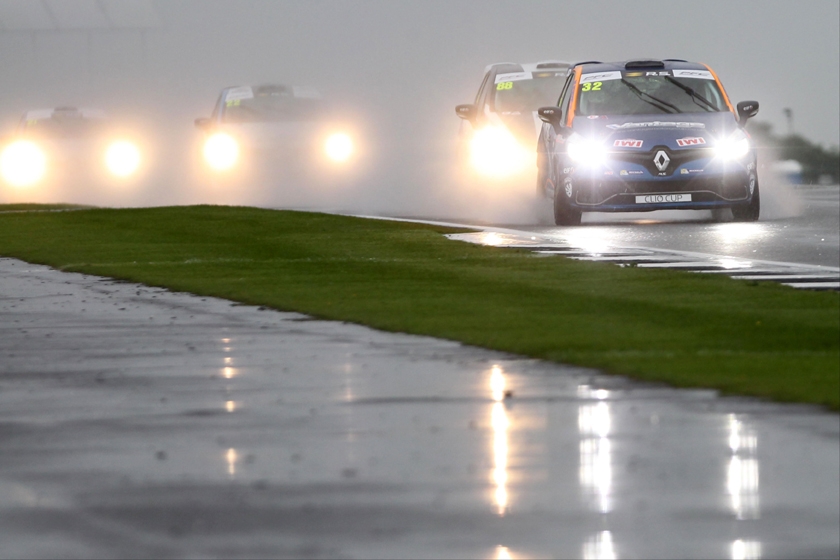 James Dorlin (Barnsley) and, in his 200th race in the championship, Paul Rivett (Epsom Downs) shared the victories in the Renault UK Clio Cup’s latest two rounds at Silverstone at the weekend.

But it is Mike Bushell (Tunbridge Wells) who leaves the famous Northamptonshire circuit as the new 2017 Champion with the season finale at his home track of Brands Hatch, Kent (Sat 30 Sept/Sun 1 Oct) still to go…

Westbourne Motorsport’s Dorlin mastered atrociously wet conditions to win race one, held on Saturday afternoon. Team Pyro’s Lucas Orrock (Cambridge) had started it from his first-ever pole position in the category and initially led but the tiniest error from him was all Dorlin needed to slip past and take the win.

Orrock took second place to record his first UK Clio Cup podium result ahead of WDE Motorsport’s Rivett in third. Pyro’s Bushell was fifth and with his closest championship rival, WDE’s Lee Pattison (Halifax), finishing back in eighth he knew that a top nine finish in Sunday’s second race would be enough to secure the title.

The race, shown live on ITV4, turned out to be one of the most exciting of the 2017 season…

Bushell started from pole and led the opening laps until Rivett found a way past into the lead. Eight drivers in all then became involved in a dramatic lead battle but three-time Champion Rivett used all his experience to cling on and take the win in his landmark 200th race.

Bushell finished right behind in second and that was more than enough for him to make sure of his second UK Clio Cup title having previously won it in 2014 – then as now with the Pyro squad. Third place went to DRM’s Daniel Rowbottom.

Heading to Brands Hatch in two weeks, Bushell cannot now be caught in the drivers’ championship. Rivett has moved up to second ahead of WDE team-mate Pattison. Still to be decided though is the Entrants Trophy title, significantly between the Pyro and WDE outfits.

Also to be decided at Brands Hatch is the Graduates Cup title for younger drivers in their first full UK Clio Cup seasons. That will come down to a three-way fight between Dorlin and two more Pyro drivers, Nathan Harrison (Oxford) and ‘outsider’ Jack McCarthy (Bromley). Heading there Harrison still leads but his advantage now is down to just 14 points over Dorlin with a possible 64 to be won in the final two rounds. Meanwhile Rivett is looking good for the Masters Cup for older drivers…