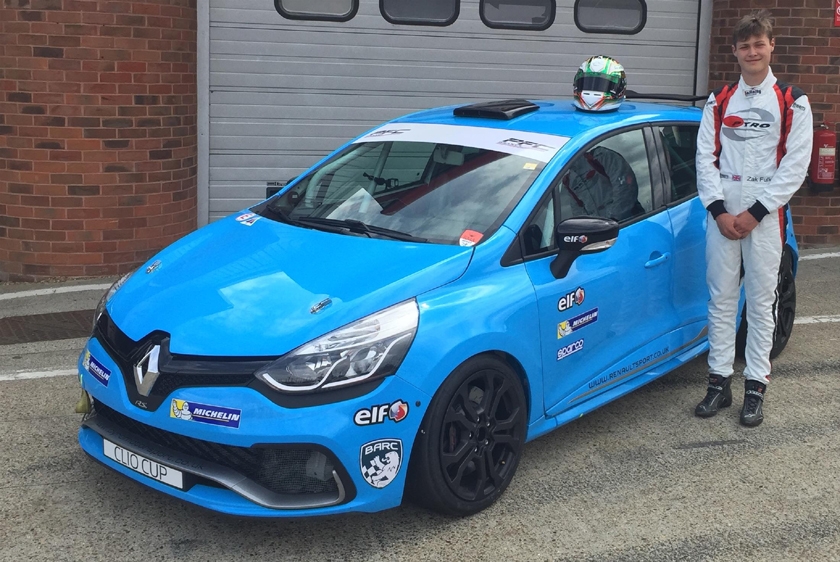 Fulk joins Bradley Burns (Farnham) in making his debut at Rockingham and, in doing so, becoming one of the youngest drivers ever to race in the championship – he only turned 16 in May. Burns’s 16th birthday was earlier this month…

The UK Clio Cup is regarded as one of the premier single-model saloon car racing categories in Europe and, with a permanent place at the British Touring Car Championship’s high profile events, is seen by average trackside crowds of close to 40,000 people and its action is shown live on ITV4.

Fulk comes from a successful career in karting, having won at national and international level in the sport’s Rotax classes. Sponsoring his UK Clio Cup entry are Hammer PLC, Olive Communications and Select Euro.

He commented: “It’s a bit of a leap for me but I’ve tested the UK Clio Cup car and really enjoy how it works around a circuit. Pyro have a great track record in Clio Cup racing and I feel this is the championship you need to do to set yourself up for the future – Renault Sport gives it a really professional edge and the championship offers drivers great exposure. I’m really looking forward to getting going at Rockingham.”

Notably among Pyro’s existing driver line-up is Jack McCarthy – a rival of Fulk’s during their karting days.

Pyro Team Principal Mark Hunt said: “We are very happy to welcome Zak on board for the remainder of the season. Having seen how quickly Jack McCarthy has got on with the UK Clio Cup car we are sure Zak will do likewise. He is a very promising young talent…”

Will Fewkes, Renault Sport’s UK Motorsport Championship Manager, added: “We very much welcome Zak to our grid, particularly as he has been working towards a deal for a while. It is also very exciting seeing another top name from karting choosing go the Clio Cup route – whether it be our senior UK Clio Cup alongside the BTCC or the new UK Clio Cup Junior category for 14 to 17 year-old drivers which gets under way in September.”