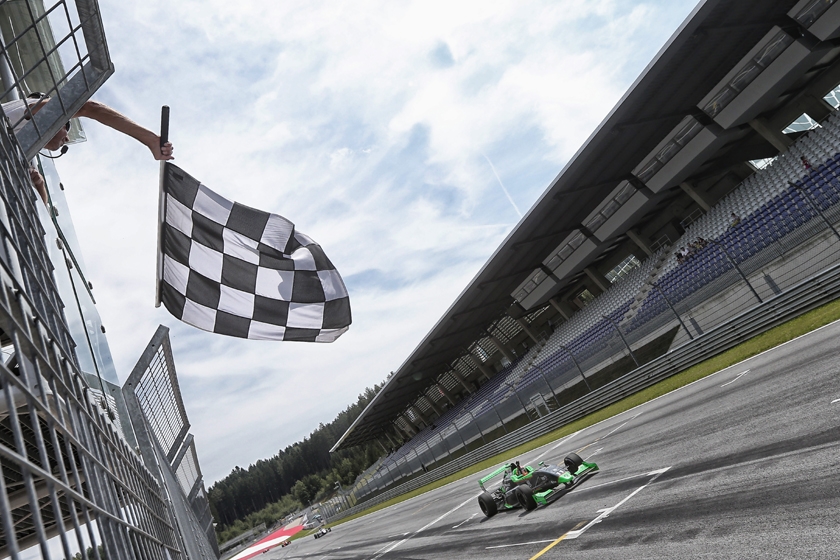 The Frenchman was followed to the flag by Will Palmer (R-ace GP) and Gabriel Aubry (Tech 1 Racing). Renault Sport Academy driver Max Fewtrell (Tech 1 Racing) was fourth and first among the rookies. With the win Sacha Fenestraz now has a 27-point lead from his closest rival, while there are only ten drivers still in contention for the title.

On Saturday, Sacha Fenestraz won the pole with a lap of 1:28.429 at the expense of Gabriel Aubry, who set the exact same time in the following group. The new leader in the general classification started ahead of Gabriel Aubry, Max Defourny (R-ace GP), Will Palmer, Daniel Ticktum (Arden Motorsport) and Robert Shwartzman (R-ace GP).

At the start, Sacha Fenestraz held on to the lead while Will Palmer made the most of the battle between Gabriel Aubry and Max Defourny to move into second place. Behind, Robert Shwartzman was up to fifth before overtaking Max Defourny on lap two. The Russian was imitated by Max Fewtrell and Daniel Ticktum on lap six.

While Sacha Fenestraz pulled out a comfortable lead, the safety car was called out after the incident between Axel Matus (AVF by Adrián Vallés) and Presley Martono (Mark Burdett Motorsport), which erased his advantage. The French driver pulled away again at the restart before another safety car period to clear away the car of Thomas Maxwell (Tech 1 Racing), who was in a scrap for tenth place.

The race resumed for the final three laps. Sacha Fenestraz wasn’t threatened and went on for this win of the season ahead of Will Palmer and Gabriel Aubry, who fended off team mate Max Fewtrell. Further back, Daniel Ticktum, Thomas Randle (AVF by Adrián Vallés) and Yifei Ye (Josef Kaufmann Racing) all got past Max Defourny on the last lap. After losing several positions during the first restart, Robert Shwartzman finished ninth ahead of Henrique Chaves (AVF by Adrián Vallés).

Sacha Fenestraz (Josef Kaufmann Racing): “It was not an easy race! The car was fantastic today and I want to thank the team. It is a shame the safety car periods obliged me to rebuild my lead twice, but I got good restarts. It has been an excellent weekend. My goal was to take the lead in the general classification before going on vacation, and I did it. I am already looking forward to Circuit Paul Ricard to keep this momentum going!”

Will Palmer (R-ace GP): “I had a difficult race yesterday when I got caught up in the incident between Daniel Ticktum and Robert Shwartzman at turn one. After a race out of the points, it was good to bounce back with a podium and a lot of points. It was a little chaotic on lap one between Gabriel Aubry and Max Defourny. When they both went straight off at turn three, I dove to the inside to get ahead of them at the exit. Sacha was already far ahead, but this second place is satisfying. We will come back stronger at Le Castellet, if we believe in the performance we showed there during the pre-season tests!”

Gabriel Aubry (Tech 1 Racing): “Qualifying yesterday showed that we are back in the hunt with the best time in my group, which was exactly the same as Sacha’s! Today’s race seemed long to me, because I had to do a lot of defending. The battles with the two Max’s were intense, but it was good to be able to hold on to my place on the podium. This is a good result before going on vacation.”

Max Fewtrell (Tech 1 Racing): “I am really pleased with my race. Contrary to the first qualifying session, I wasn’t able to perfectly negotiate the second sector in yesterday morning’ session and the tenth of a second I was missing made all the difference. I wasn’t expecting very much in starting eighth, nothing more than fifth, but I made some nice overtaking moves before attacking Gabriel. After three bad weekends, I really hope I can keep the momentum going for the rest of the season.”

Before heading off on holiday, Sacha Fenestraz, Robert Shwartzman, Will Palmer, Gabriel Aubry, Max Fewtrell and Yifei Ye will meet up in Budapest on July 27 and 28. They will be invited by Renault Sport Racing to spend two days in the F1 paddock during the Hungarian Grand Prix to discover what goes on behind the scenes of a Grand Prix and meet with the key personnel of the Renault Sport Formula One Team.