Will Palmer and Sacha Fenestraz on pole at Monaco 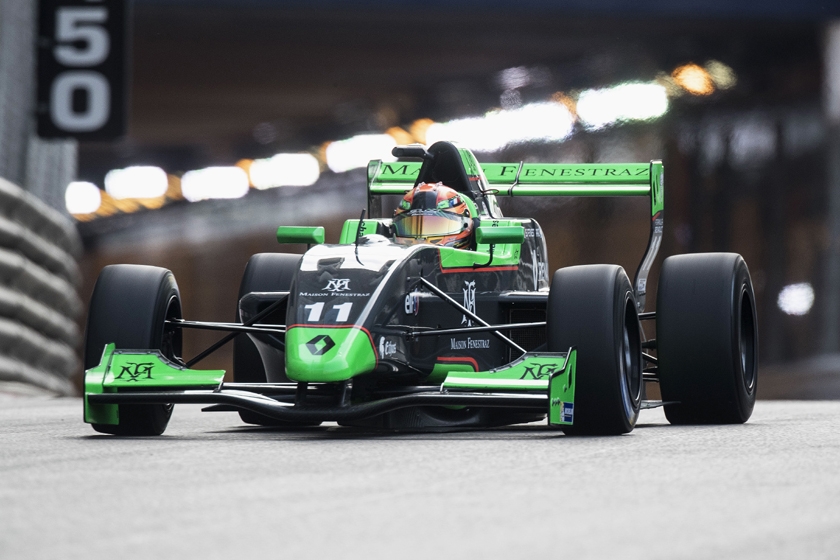 Will Palmer (R-ace GP) and Sacha Fenestraz (Tech 1 Racing) will start from pole position this weekend in the Formula Renault Eurocup at Monaco.

On Saturday, The Briton will line up ahead of the Frenchman on the grid before the roles are reversed on Sunday for race 2, which will be the curtain raiser for the F1 Grand Prix. Series leader Robert Shwartzman (R-ace GP) will start both races from third on the grid following the penalty handed down at Pau to Red Bull Junior Team driver Daniel Ticktum (Arden Motorsport, the highest placed rookie in qualifying.

Group A – Will Palmer in control

On top of the time sheet when it came time to switch to new tyres, Will Palmer improved to a session best 1:30.896 to lock up the pole ahead of his countryman Daniel Ticktum. Alex Peroni, who received a two place penalty on the starting grid of race one like Daniel Ticktum, Richard Verschoor and Alexey Korneev, completed the top five.

Group B – A new track record for Sacha Fenestraz

Robert Shwartzman and Gabriel Aubry (Tech 1 Racing) swapped best time before Sacha Fenestraz moved to the top of the time sheet. The Frenchman held just until the chequered flag despite the efforts of the leader in the general classification.

After Najiy Ayyad bin Abd Razak (Fortec Motorsports) made slight contact, which invoked the virtual safety car, Sacha Fenestraz improved to 1:30.776 then made contact with the guard rail at the exit of Piscine then concluded his session with a spin at Rascasse. Nevertheless he led from Robert Shwartzman, Max Defourny (R-ace GP), Gabriel Aubry and Alex Vartanyan (JD Motorsport) at the end of qualifying.

Will Palmer (R-ace GP): “It’s a really special feeling to get the pole at Monaco. It is even more so because I am racing on the same weekend as my brother. He has won here and we were able to talk about a few of the corners. I am rather pleased with my lap this morning. There are still areas where we can improve, but we saw that the second group wasn’t that much faster despite the better track conditions. I look forward to the races and I really hope to win on this circuit.”

Sacha Fenestraz (Josef Kaufmann Racing): “Tomorrow, I will be careful on the first two laps after my slight contact this morning! I went in a little too fast, I felt the contact with the wall and I didn’t have the traction needed for Rascasse. It is a shame to end the session that way considering our pace and my comfort level in the car. Even if I start from row one, I will try to win both races even if overtaking is complicated at Monaco. Starting from the pole on Sunday reminds of some fantastic memories!”

Robert Shwartzman (R-ace GP): “It was a good session and nice battle with Sacha. We were really close, but I made a mistake in the last sector on my last lap and it cost me the pole. I will be third on the grid for both races. I will have to see what I can do, but it is not easy to pass at Monaco.”

Daniel Ticktum (Arden Motorsport): “It was a very early start to the day, but I had a good session. After yesterday’s practice, we knew we were in good shape despite the large gaps due to the red flag. Qualifying went well, but I had to give up on my fourth lap on my second set of tyres. If it wasn’t for the traffic, I could have maintained the pace and gone a little faster, but the pole was out of reach. Because of my penalty, the goal is now to score a lot of points on Saturday and try to finish on the podium on Sunday.”