Fastest time for Max Defourny in practice at Silverstone 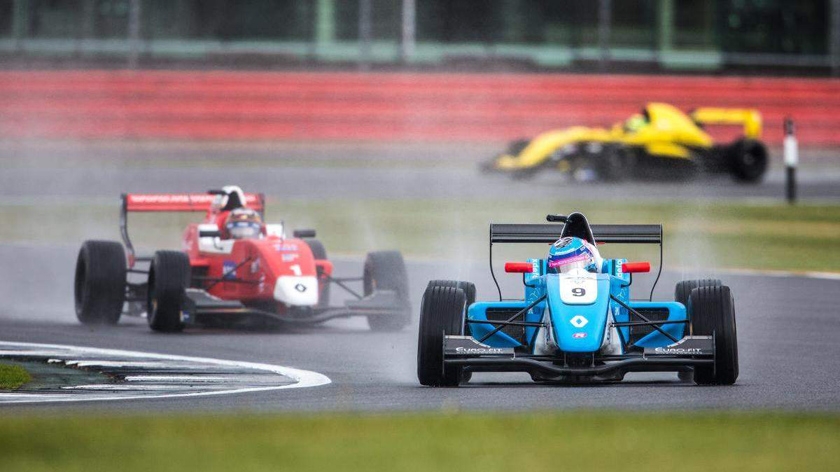 Rain was part of the story for the Formula Renault Eurocup collective tests at Silverstone. In these conditions, Max Defourny (R-ace GP) led the two sessions, clocking the best time of the day in 2:14.542 ahead of his team mates, series leader Will Palmer (R-ace GP) and SMP Racing protégé Robert Schwartzman (R-ace GP). Renault Sport Academy driver, Max Fewtrell (Tech 1 Racing) was quickest among the Eurocupers rookies.

While Max Defourny, Robert Shwartzman and Ye Yifei (Josef Kaufmann Racing) each dominated a session during the private tests, Will Palmer made the most of the final 45-minute session to set best time on Thursday in 1:57.287.

Eight minutes from the chequers Will Palmer began the final sprint with Max Defourny setting best time in 2:14.542 before another stoppage caused by Luis Leeds (Josef Kaufmann Racing). The Belgian native was followed by team mates Will Palmer and Robert Shwartzman. Henrique Chaves (AVF by Adrián Vallés) and Sacha Fenestraz (Josef Kaufmann Racing) completed the top five. Max Fewtrell was the highest placed rookie with the seventh fastest lap.

In the afternoon, sprinkles fell over Silverstone for the start of session two. Will Palmer was leading before the red flag caused by Axel Matus. When the session re-started the rain intensified and the competitors swapped their slicks for rain tyres.

Max Defourny went to the top of the order, setting a time within 0.005s of his morning reference time, before the session came to a premature end provoked by Thomas Neubauer (Tech 1 Racing). The Belgian was followed by Henrique Chaves, Alex Peroni (Fortec Motorsports), Robert Shwartzman and Max Fewtrell, who was once again the highest placed rookie.

Max Defourny (R-ace GP): “It was a positive day after a disappointing weekend at Monza. We have to stay focused on our programme and keep doing a good job to get the pole positon. The weather conditions are a bit unpredictable for now, but I don’t have a preference, we will adapt to the weather!”

Henrique Chaves (AVF by Adrián Vallés): “The collective tests got the weekend off to an ideal start. I think that the three drivers ahead of me this morning were on new tyres, but the feeling was there and the team did an excellent job to boost my confidence and be competitive. The second best time this afternoon I think proves that. Let’s hope for some rain on Saturday and Sunday! We will also be in it if we have dry conditions though. I want to do a podium really bad. I’ve worked hard and I hope I can give my father a nice birthday present tomorrow!”

Alex Peroni (Fortec Motorsports): “We had good pace this afternoon. The weather is always unpredictable here. It was the first time that I drove at Silverstone in the rain. This morning was a steep learning-curve while working to get everything together at the end of the day. The rain will make things more interesting this weekend, but I hope the weather will stabilize. In any case, we will only be happy if we win!”

Max Fewtrell (Tech 1 Racing): “It was a very positive day. I look forward to qualifying tomorrow, because I think there was a lot of time to gain had there not been the last red flag in the second session. Racing at home is always special. Even though we used the ‘National’ configuration in F4, I know this track a little better than the others. Anyway, my goal is the same and I aiming for the win, or at least the podium. "