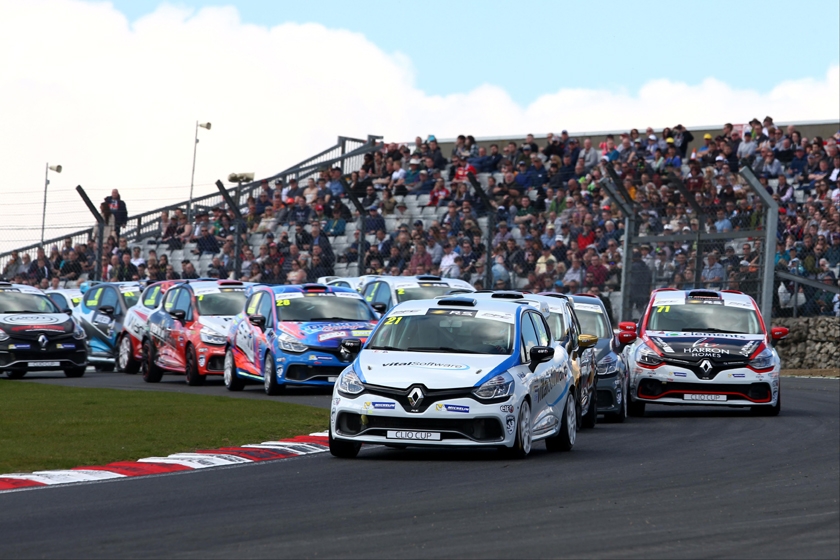 With a tie at the top the Renault UK Clio Cup title race couldn’t be closer as it next heads to the famous Donington Park on the Derbyshire-Leicestershire border for its latest two rounds of 2017 (Easter Sunday, 16 April). It’s a circuit that has a knack for conjuring up some of the most exciting racing of the season.

In a nutshell
Lee Pattison (Halifax) and Mike Bushell (Tunbridge Wells) took a win and a second place apiece in Brands Hatch’s opening two rounds to come away as joint leaders. However both will have to be at their excellent best at Donington as Brands’s races demonstrated there are plenty more drivers capable of being on the top step of the podium. In fact it’s a 25-car entry for Donington – the biggest seen in the UK Clio Cup since September 2013…

More overtaking, faster speeds
Furthermore the wider, swooping, high-speed Donington circuit offers greater opportunities for overtaking and it seems likely there will be even higher lap speeds to contend with thanks to a faster Michelin tyre being used by the UK Clio Cup this year. Indeed both the qualifying and race lap records were annihilated at Brands and each will surely be under threat at Donington.

The chase is on
Heading the chase of Pattison and Bushell currently are their WDE Motorsport and Team Pyro team-mates Paul Rivett (Epsom Downs) and Jack McCarthy (Bromley). To find three-time Champion Rivett up there is no surprise. However to find McCarthy there is – the former karting champion is just 16 years old and Brands’s races, in which he finished fifth and then fourth, were his first ever in cars…

Another newcomer to impress mightily at Brands was 17-year-old James Dorlin (Barnsley) in his Westbourne Motorsport car. Arriving at Donington, McCarthy and Dorlin head the Graduates Cup class for young, first-year drivers.

Ciceley Motorsport’s Max Coates (Scorton) and PP Motorsport/Westbourne’s James Colburn (Worthing) bagged solid points at Brands but, having gone into the event among the favourites for podiums and wins, they will be hoping for considerably more at Donington. Coates qualified on pole position at Donington 12 months ago…

Meanwhile another of the ‘Graduate’ class runners, Shayne Deegan (Cambridge) in his spectacularly driven SDR car plus WDE’s Dan Zelos (Dereham) and Pyro’s Ollie Pidgely (Salisbury) are also on confidence highs after strong starts at Brands.

Looking for improvements
When a grid is brimming with so much talent (2017’s UK Clio Cup entry is truly stellar) some drivers suddenly find themselves further back than expected. After, by their standards, below par results at Brands this lot will be out to make amends at Donington.

Likewise, WDE’s Paul Streather (Hinckley) who was ruled out of action at Brands. Streather set a fastest race lap last year at Donington and it is also, in 2015, where Hand achieved his maiden UK Clio Cup race win – the first of seven in fact that year when he nearly beat Sutton to the title.

After also being sidelined at Brands, Nottingham’s Graham Field (JamSport) hopes to appear for his home event. Making his UK Clio Cup debut in his self-run STR car is Shawn Taylor (Norwich).

When/where to watch
The UK Clio Cup drivers will first be on track at Donington on the Thursday (13 April) for two timed test sessions – this will enable them to fine-tune their cars to the circuit’s characteristics. Then on Saturday it’s the half-hour qualifying session (2.00pm) followed on Sunday by the two races (10.00am and then 3.50pm and both 14 laps).

Sunday’s action will be shown during ITV4’s live coverage of the event (10.45am-6.15pm) which also includes the latest three rounds of the BTCC.