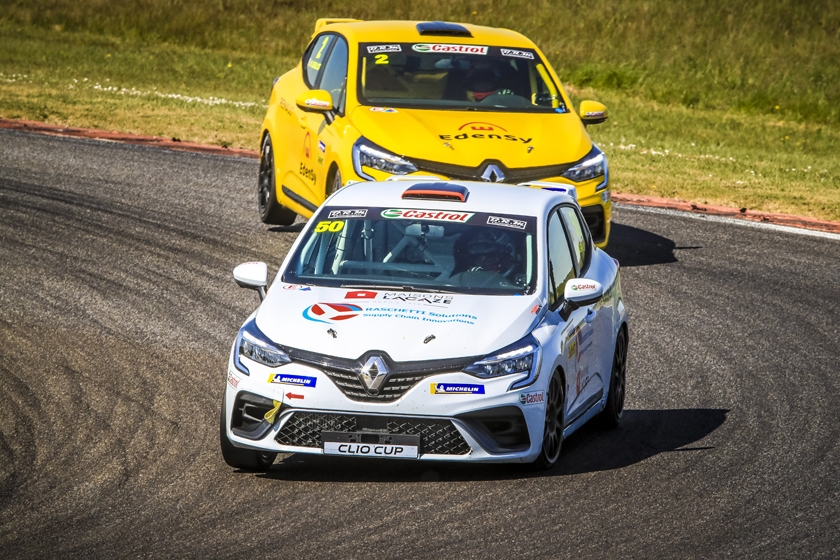 Nicolas Milan (Milan Competition), who climbed from seventh to second place on Sunday, went one better today with the win in the second of thirty races on the Clio Cup Europe calendar. The French driver beat team-mate Marc Guillot (Milan Competition) and Challengers Cup winner Kévin Jimenez (GPA Racing) to move to the top of the Clio Cup Europe and Group B classifications.

While GPA Racing dominated qualifying yesterday, today it was Milan Compétition leading the way with Nicolas Milan lining up on pole with Marc Guillot by his side. Challenger Kévin Jimenez and Anthony Jurado shared row two ahead of Dorian Guldenfels (TB2S).

With the field lined up on the grid, a problem with the light system brought at the red flag after just 16 seconds of the race.

Following a ten-minute wait in the pitlane and a lap behind the safety car, the race got underway. The sharp end of the order remained pat, while David Pouget (GPA Racing) overtook Thibaut Bossy (TB2S) for seventh place.

Nicolas Milan went on for a trouble-free win although less than a second ahead of team-mate Marc Guillot. Once again the winner in the Challengers Cup, Kévin Jimenez completed the podium ahead of David Pouget and Dorian Guildenfels, who got past Anthony Jurado for fifth place three laps from the chequered flag. Mathieu Lannepoudenx finished seventh, followed by Thibaut Bossy, Alexandre Albouy (GPA Racing) and Poland’s Jerzy Spinkiewicz (Uniq Racing).

Nicolas Milan takes the lead in the Clio Cup Europe general classification with an eight-point advantage over David Pouget and 20 over Kévin Jimenez, who has a 17-point lead over Alexandre Albouy in the Challengers Cup. In the Gentlemen Drivers Cup, Lionel Viguier is three points ahead of Franck Horn.

The Clio Cup Europe will next head to the Autodromo di Monza (30 April-2 May), where several Italian competitors are expected to launch their campaign.

Nicolas Milan (Milan Compétition) : "This weekend brought back some great memories of the Clio Eurocup, especially as the changes have made the Clio Cup even more enjoyable to drive. I had a lot of fun in the first race, and the second race was a little calmer. However, the results are there, with Marc, Anthony and Mathieu also well placed. We are here to have fun, so we are happy that there are many races on circuits that will be new to all of us. I’m already looking forward to Monza where I’ve never driven before !"