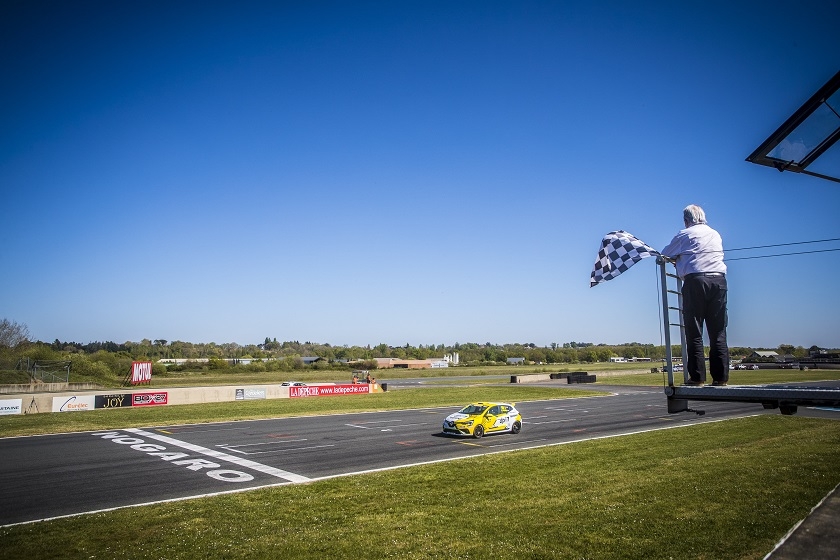 Clio Cup kicked off its 30th anniversary at Nogaro with one of its most loyal contenders, David Pouget (GPA Racing), scoring the first win of 2021. Starting from second on the grid, the Frenchman triumphed ahead of Nicolas Milan (Milan Compétition) and Kévin Jimenez (GPA Racing), poleman and winner of the Challengers Cup. Lionel Viguier (TB2S) also won in the Gentlemen Drivers Cup. The first-ever meeting of the Clio Cup Europe promised to be wide-open and it turned out to be a hotly contested battle among five drivers atop the timing screen in the six sessions held on Thursday and Friday.

Already at the front of the field, GPA Racing confirmed its strong form when the Challenger Kevin Jimenez edged out team-mates David Pouget and Alexandre Albouy for the first pole position of the season.

At the start, the Frenchman held on to the lead ahead of David Pouget while Alexandre Albouy fell behind Dorian Guldenfels (TB2S) and Marc Guillot (Milan Compétition). The action heated up on lap two when David Pouget surprised Kevin Jimenez to take the lead.

The two leaders then tried to pull away from the field animated by Nicolas Milan. After overtaking Alexandre Albouy on lap two, the ten-times Clio Cup champion got past Marc Guillot and then Dorian Guldenfels to pick up two positions in as many laps. He was in third place at half-distance.

Race leader David Pouget lengthened his lead and left Kevin Jimenez to deal with the pressure coming from Nicolas Milan, who moved into second place at the conclusion of a scintillating duel on lap 13.

David Pouget went on for the win with a more than two-second margin from Nicolas Milan and Kevin Jimenez, whose third-place finish assured him the win in the Challengers Cup. Dorian Guldenfels came home fourth ahead of Anthony Jurado (Milan Compétition), who got past Marc Guillot two laps from the chequered flag.

Tomorrow, the Clio Cup Europe will be back in action with another qualifying session at 8h45 before the second and final race at Nogaro at 15h10.

David Pouget (GPA Racing) : "I started from second place behind Kevin, but I managed to pass him quickly, and we both started to pull away. It feels good to win the first race of the year, even more so after the GPA Racing 1-2-3 in qualifying. The season is off to a great start, and we’ll have to continue to do what we’re doing."