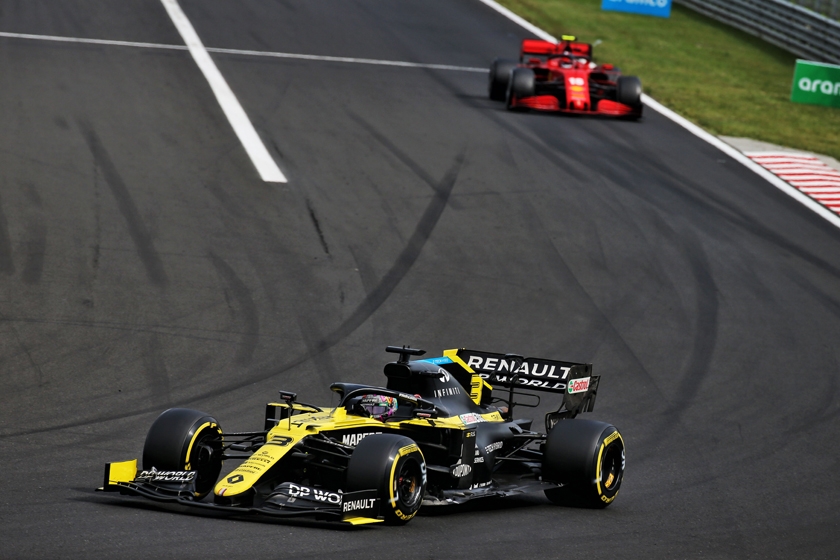 In a similar trend to Saturday’s qualifying, rain clouds circled the Hungaroring with showers expected throughout the day.

The rain arrived prior to the race with both drivers starting on Pirelli’s Intermediate tyres with Daniel eleventh and Esteban fourteenth.

Daniel gained two places on the opening laps with Esteban slow off the line and trailing back to seventeenth.

With others pitting for dry tyres, Daniel and Esteban ran as high as second and third before the opening stops for Mediums on lap 4.

The race soon settled with Daniel knocking on the door of the points and Esteban opting for an aggressive approach by stopping at the midway point for Hards.

Daniel remained out – jumping a number of cars ahead of him – before pitting on lap 43 for a new set of Mediums. He pushed into the top eight and hunted down a top six finish, which he narrowly missed out on by just two seconds.Esteban managed his Hard tyres to the end of the race, finishing fourteenth.

"It was quite a busy race and, overall, I’m happy with how it went. I gave everything I could and I felt we got the most from it today. Our start was good and everyone around us went for slicks quite early on. We showed good pace on the Medium and almost caught the top six at the end. Eighth was all we could achieve in the end, though. We’ve had eighth in every race so far. It’s not bad, but I do feel we have the speed for more from the first three races. We’re not far from top six finishes, it’s coming, and we know bigger points are around the corner."

"It has been a tough weekend from the beginning. We’re not happy with it, of course, and it’s not a great result. We are all disappointed and we can only come back stronger from here. We have to learn from it, move on and come back as a team. There was a lot happening in the race, but we didn’t make any progress in any of the conditions. We have to review it and work hard together to avoid this type of result. The first two races were decent, but there was not enough improvements for this one."

"It’s the third race in a row where we have finished in eighth place. Given the competitiveness of the field, it is where our car probably is right now. It was good to get the two cars at the end as a lot has been done to overcome the reliability issues from the first two races. This weekend has revolved around tyre choices and looking at the weather radar. Our strong competitiveness on Friday encouraged us to try and qualify on the Medium, but in hindsight doing so we probably made the qualifying session too difficult and not only it did not pay in terms of starting position but it also turned out to be unnecessary as we all started on Intermediates for the race. We didn’t have great first laps, but we managed to recover after the first stop, which was probably rightly timed on a drying track. From that point onwards it was about managing a dry race with two sets of Mediums for Daniel and Medium to Hard for Esteban. Both cars showed once again very decent pace in free air, but the pace delta was not enough to progress further in the order towards the end of the race. Esteban is clearly disappointed with his weekend and we will use the time we have before the next triple headers to look into what we can do to rebound."