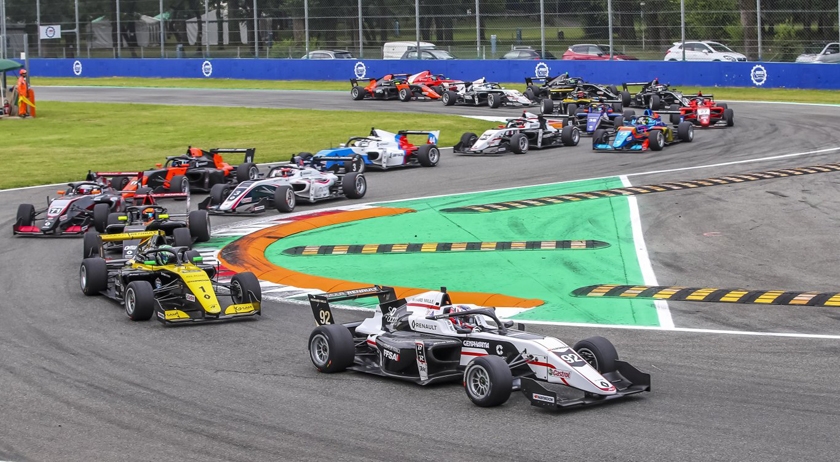 Looking to continue his streak of 20 consecutive races in the points before the start, Caio Collet (R-ace GP) took his maiden victory in the Formula Renault Eurocup. Second on the grid, the Brazilian member of the Renault Sport Academy got the better of pole man Victor Martins (ART Grand Prix) and Franco Colapinto (MP Motorsport). Overall fourth place finisher, Michael Belov (M2 Competition) claimed his first Hankook Trophy given to the highest rookie finisher.

While Victor Martins held onto the lead from Caio Collet, the battle among those behind was on the boil. Third coming out of Lesmo, Alex Quinn was punted by Petr Ptáček and his car hit the rail before coming back onto the track. Amaury Cordeel and Ugo de Wilde (Arden Motorsport) couldn’t avoid it while Tijmen van der Helm (FA Racing) came out of the incident with a broken front wing.

The safety car led the field until lap four. At the restart, Victor Martins held off Caio Collet and Franco Colapinto. The trio quickly pulled away from the rest of the field led by Petr Ptáček while Grégoire Saucy (ART Grand Prix) moved past Michael Belov for fifth place.

On lap seven, Caio Collet used the draft to take the lead of the race from Victor Martins at turn one. The Frenchman tried to reclaim the position, but the situation actually worked out better for Franco Colapinto who slotted into second place only to see Victor Martins regain the spot two laps later.

Race leader, Caio Collet went on for his first victory ahead of Victor Martins and Franco Colapinto. After overtaking Grégoire Saucy, Michael Belov did the same to Petr Ptáček to finish fourth and take the honours among the rookies. He was followed by William Alatalo and Hadrien David (MP Motorsport), who got around Petr Ptáček on the penultimate lap.

At the end of the opening round of the year, Caio Collet and Franco Colapinto are tied for the lead of the general classification before the paddock heads to Imola (July 23-26) for the second race weekend of what is shaping to be an incredibly tight 50th season in the history of Formula Renault.

Caio Collet (R-ace GP): "I’m extremely happy to score my first win! It was an extremely difficult race, but I was able to seize my chance by staying in the slipstream after the restart. Victor was more vulnerable and I took advantage of that. Once in the lead, I tried to push hard on as many laps as I could, but the gaps were very small among the three of us. I am also happy to see that we have improved our race pace compared to yesterday. I would like to thank R-ace GP, the Renault Sport Academy, God and my partners for giving me the opportunity to be here. This was only the first meeting of the season, so we will continue to work hard to stay on top of the podium."

Victor Martins (ART Grand Prix): "After yesterday’s incident, it’s good to finish on the podium and score a lot of points. I got a good start, but I struggled a bit at the beginning. I didn’t manage to have the perfect restart and that put me in trouble. The car improved as the race went on and I tried to stay as close as possible to him but we were on a very similar pace. Now we are going to prepare for Imola, but I am confident because we have a fast car."

Franco Colapinto (MP Motorsport): "It was an intense race with some great moves everywhere and I am delighted with this second podium result, which is a lot of points towards the championship. The goal will be to be consistent throughout the season and there are eighteen races left on the calendar. I would like to thank the team for providing me with an extremely fast car since the beginning of the week and I can’t wait to go to Imola to aim for more podium finishes."

Michael Belov (M2 Competition): "I’m happy with the result, but I wanted more. I managed to finish in the top five, but it was really difficult to catch up the leading trio. I made some small mistakes, so I think we can do even better in Imola. I am more comfortable in qualifying than in the race, so we will have to improve our pace on one lap to make it easier to finish on the podium!"