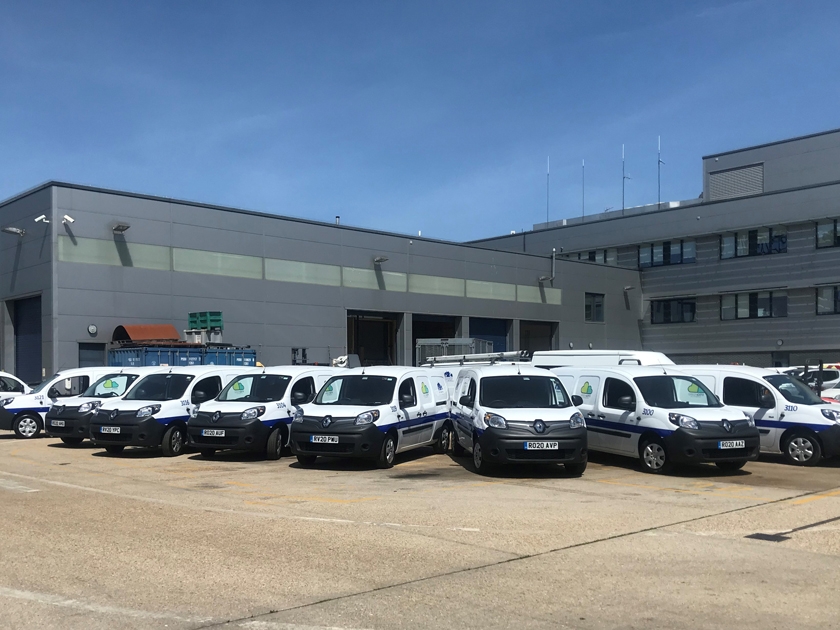 The all-electric Renault Kangoo Z.E.33 is set to help Southampton City Council (SCC) clean up in its drive to make the city a healthier, greener and more sustainable environment for present and future generations.

The Council has taken delivery of 24 zero-emissions-in-use Renault Kangoo Z.E.33 Panel Vans, which will be used in the upkeep of the City and contribute to its goal of 90 per cent of its fleet to be zero-emission by 2030. The target is part of Southampton City Council’s recently revealed Green City Plan 2030, which aims to tackle the affect of climate change on the city and provides a strategy for Southampton to grow and evolve as a modern, healthy and attractive place to live, work and do business.

Southampton City Council ordered its new Renault Kangoo Z.E.33 vans after the award-winning light commercial was determined to be the best fit for its operational requirements by formal tender via the public sector framework. The order fully utilised the variety of the Renault Kangoo Z.E.33 range, including one Crew Van version and a mixture of standard Panel Van and longer Maxi Panel body styles.

The new vans replace existing diesel vans in SCC’s fleet and will be used by a variety of essential services including Neighbourhood Wardens and Waste Operations teams. The usability of the zero-emissions-in-use vans has also been enhanced with the fitment of the optional heat pump. Part of the air conditioning system, it produces heat or cools down the vehicle. Acting like reversible air conditioning, it operates in both capacities while preserving the driving range that is available to SCC’s personnel.  Optional towbars also allow the Council to carry small trailers to help with the vital upkeep of the city’s 49 parks, over 1,100 hectares of open space and cemeteries.

With part of the Green City Plan outlining a strategy for a non-charging Clean Air Zone, the new all-electric Renault vans will allow SCC to lead by example without having an impact on the effectiveness of its operations. With zero CO2 emissions when being driven, minimal noise in operation and being fully automatic, the Renault Kangoo Z.E.33s are perfect for preserving the city while also providing a high level of comfort for SCC’s operatives in a such a highly populated urban environment.

Councillor Steve Leggett, Cabinet Member for Green City and Place, commented: “Southampton City Council set ambitious, challenging goals to help tackle climate change, this includes being a carbon neutral council by 2030. Our Green City Plan published in March, details our approach and principles for the next 10 years. Addressing road transport emissions by reducing the numbers of vehicles on our roads and encouraging drivers to switch to hybrid and electric vehicles is an essential part of our overall strategy. We are leading the way with our Fleet Modernisation Plan, as part of this we are adding the 24 new electric   Renault Kangoo vans to our fleet. As well as helping us reduce emissions, our green energy tariff will mean we are also reducing our carbon footprint. The Renault vans increased battery range offered by this latest generation means our services are not interrupted to accommodate charging needs.”

Vincent Tourette, Managing Director, Groupe Renault UK, said: “We are seeing a significant increase in the uptake of Renault electric vehicles by the public sector and it’s pleasing to see such an ambitious council such as Southampton utilise the Renault Kangoo Z.E.33 to help it reach its environmental goals. Groupe Renault have been manufacturing electric vans since 2011, and this proven technology allows our business customers to confidently switch to EVs without any concern that protecting their local environment will not be to the detriment of their operational capacity.”

Available in three body styles (Panel Van, Maxi Panel Van and Crew Van the Renault Kangoo Z.E.33’s load area stretches up to 4.6 cubic metres, depending on the model. Powered by a 44kW motor with 225Nm of torque and mated to a smooth single speed transmission it’s ideal for urban and open road deliveries, helped in no small part by a potential range of up to 143 miles (WLTP). The Renault Kangoo Z.E. is priced from £19,380, excluding VAT, after the Plug-in Van Grant.

Renault have been manufacturing its Z.E. range of electric commercial vehicles since 2011. Together with the Renault Kangoo Z.E.33, the line-up also comprises of the large Renault Master Z.E. (available as a Panel Van or Platform Cab) that is ideally suited for last mile deliveries.