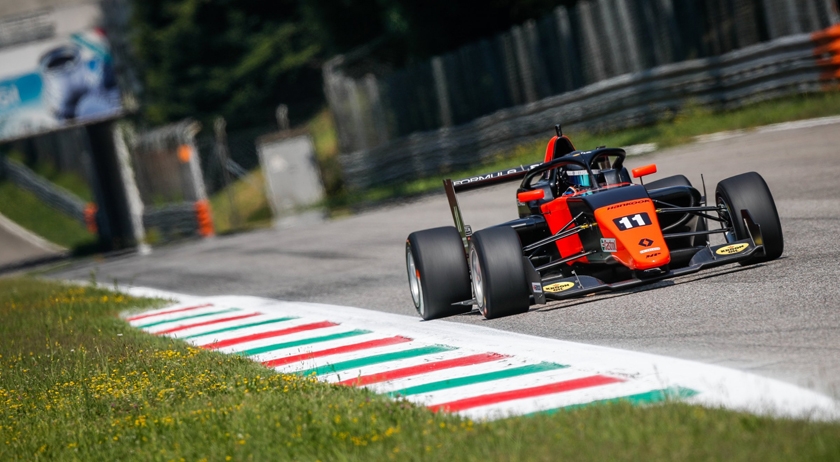 The return to action of the Formula Renault Eurocup saw Franco Colapinto (MP Motorsport) lead the way at the Autodromo di Monza. With a fastest lap of 1:48.274s, the Argentinean dominated both sessions today ahead of Renault Sport Academy driver Caio Collet (R-ace GP) and Grégoire Saucy (ART Grand Prix). Michael Belov (M2 Competition) and William Alatalo (JD Motorsport) both led a session among the rookies.

After 116 days of waiting, the Formula Renault Eurocup paddock made its way to the Autodromo di Monza for this year’s third day of pre-season testing.

Petr Ptáček (R-ace GP) was the first to complete a flying lap, but the times quickly dropped. In the first 30 minutes, Franco Colapinto moved to the top of the order just until the end of the first session that was shortened when László Tóth (Bhaitech Racing) stopped on track. With his lap of 1:48.274s, the native of Argentina led from Tijmen van der Helm (FA Racing) and team mate Joey Alders (MP Motorsport).

The teams continued their preparations under bright skies in the afternoon. The times lowered driven by Nicola Marinangeli (Bhaitech Racing), Michael Belov and Tijmen van der Helm before Franco Colapinto retook the top spot. Despite their attempts in the waning moments, Caio Collet and Grégoire Saucy could not beat the time of 1:48.283s set by the Argentinean who kept his hold on P1.

Tomorrow, the competitors will put in their final day of pre-season collective tests prior to attacking the first race weekend of the season from Thursday to Saturday.

Franco Colapinto (MP Motorsport): "It feels good to be back on the track and even better with MP Motorsport. I feel at home in this great team and I am delighted to work with them. The times are much faster than last year and we had good pace today, so we will try to lower our time between now and qualifying. It’s a crucial exercise in the Formula Renault Eurocup and we’d like to be at the front of the field from the outset although there are plenty of overtaking opportunities at Monza."

Caio Collet (R-ace GP): "The first day back went pretty well. We were able to complete our programme in the morning before an issue prevented me from running in the early afternoon. I was only able to do three runs, so this second-best time is really positive, especially as we still have some small details to improve. It was a good return to the track!"

Saucy and van der Helm in the leading pack

Grégoire Saucy (ART Grand Prix): "The break allowed me to work on my physical and mental conditioning, two points I had targeted in Valencia. It’s very hot and we’re going to have to pace ourselves throughout the week to be on top when it really counts. We still have some work to do on my driving and on the car, although I really liked the way it behaved on new tyres late in the day. I hope we will keep this momentum going and see if it is the case on Thursday night after the first qualifying session."

Tijmen van der Helm (FA Racing): "The season is finally underway and I wasn’t expecting such a great feeling in my first few laps. I didn’t think I could be at the front in the first session but we have to continue and work even harder to make sure that this is also the case during the race weekend. The level of competition is very high and we can’t take anything for granted. »

Michael Belov (M2 Competition): "The return to the track was a bit difficult as I still have to find my way in my new team. We have done well, but we are still far from reaching our full potential although it’s only testing so far. I also need to be more comfortable and confident behind the wheel. We’re going to work on that over the next few days to get stronger and stronger as the week goes on."

William Alatalo (JD Motorsport): "It’s great to get back behind the wheel after the long break since Valencia. The wait was endless and I was so eager to get back to that feeling. It wasn’t so easy to get back into the rhythm, but eventually it was just a matter of laps. Once meeting up with everyone was over, the work started again and I’m lucky to have the entire team behind me to improve this week, on a track where they won last year. I think we can get a good result to ideally kick-off our season! "