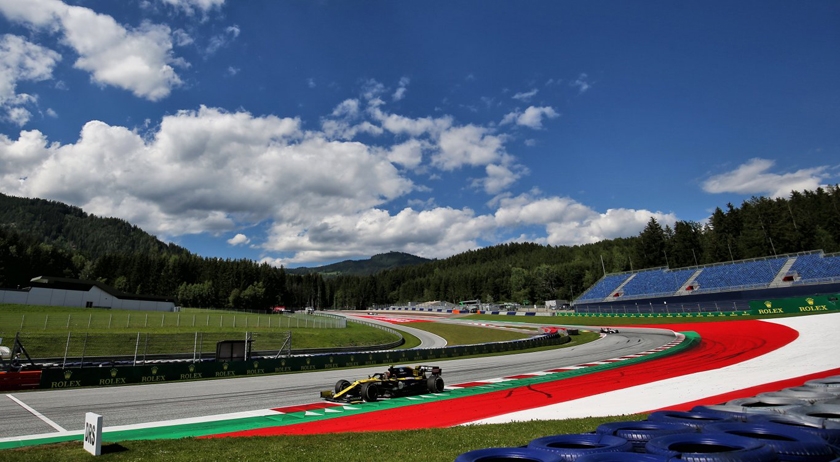 Renault DP World F1 Team’s Esteban Ocon finished in a strong eighth place on his return to racing after a thrilling and action-packed Austrian Grand Prix for the 2020 Formula 1 curtain raiser.

Daniel Ricciardo retired from the 71-lap race with a suspected cooling issue.

On his Renault debut, Esteban lined up for his first race start since the Abu Dhabi Grand Prix in 2018 in fourteenth place.

He lost two positions after a slow getaway off the line on Pirelli’s Medium tyres, but he was able to make progress as a result of cars ahead of him retiring.

Esteban pitted for Hards on lap 26 under the Safety Car. A further two Safety Cars towards the climax of the race allowed the Frenchman to push into the top 10 as he took eighth place at the flag, just 0.774 seconds down on seventh.

Daniel had made a bright start from tenth place and he was an exciting, early fight for points with several other cars.

But, he was forced to retire as a precaution for a suspected cooling issue on his Renault R.S.20 on lap 17.

Daniel Ricciardo, started P10, DNF
“Today was a reminder of what Formula 1 can be like and, sometimes, it’s unkind. It’s a shame to retire early, but we had a cooling issue and we had to retire the car as a precaution before we did any further damage. I think there are a lot of positives from the weekend. Our low fuel pace looked strong and we know we have a little bit to learn on high fuel. We can take a lot from it and it’s good we have another chance next weekend. We’ll learn and move forwards.”

Esteban Ocon, started P14, finished P8
“It felt good to be back racing properly today. Finishing in the points is a great result, especially as I’m still a little rusty! I’m satisfied with how the race went, but we know we need to qualify better in order to be further up the order. Our race pace was good, and I was happy with how the car felt. We’ll review the race and see what we can rectify and improve for next weekend. We know there will be an opportunity to fight for higher positions and I’m really looking forward to the next race.”

Cyril Abiteboul, Team Principal
“It was very good to be racing again. It was a typical first race of the season with lots of things going on throughout and some possible high reward for anyone completing the race distance. We didn’t manage that entirely with Daniel’s retirement as a precaution for a cooling issue. Esteban did a very good job and it was a solid return to racing for him, bringing us our first points in Austria since the team returned to Formula 1. He will be able to build from today. The other positive of the weekend is our baseline performance at a track where we have been very weak in the past, but in a very competitive midfield. Ahead of next week, we must focus on the main negative of the weekend: the car reliability that not only cut Daniel’s race short but also impacted Esteban’s build up to qualifying earlier in the weekend compromising his starting position.”