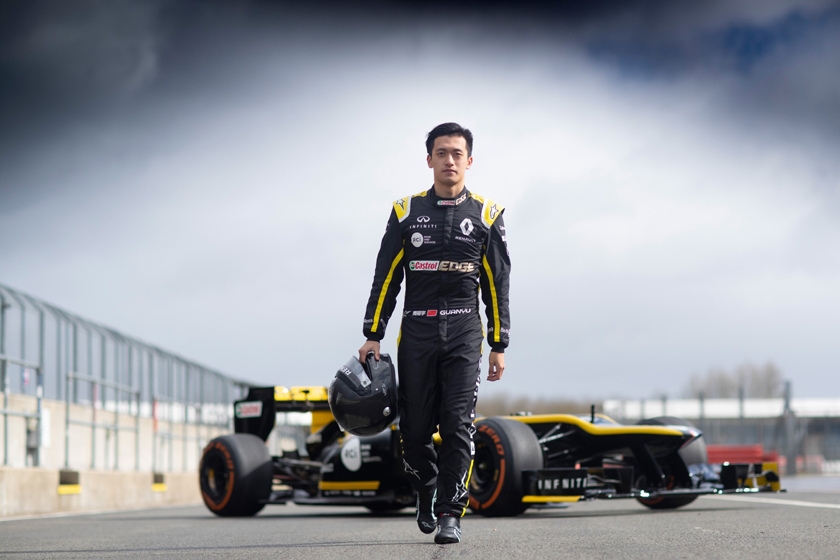 The Chinese Grand Prix will be the 1,000th Grand Prix in the history of Formula 1, but today Renault F1 Team and Formula 1 demonstrated their vision of the future. Renault will give a nod to the growing importance of Asia and in particular China on the global motorsport stage with Renault F1 Team Development Driver Guanyu Zhou. The Chinese motor racing star will give demonstration laps of the Shanghai International Circuit after steering the Renault-powered E20 F1 car through the streets of Shanghai as part of the Heineken F1 Shanghai Festival yesterday. It was the first time a Chinese driver had driven a Formula 1 car on the streets of a downtown Chinese city.

China is the world’s largest and most dynamic auto market. It is also the world's largest manufacturing economy and exporter of goods, plus the world's fastest-growing consumer market and second-largest importer of goods. With a population of 1.4 billion and a number of the world’s most dynamic cities, including Shanghai, China is a superpower on the world stage. The Chinese Grand Prix provides a unique chance for global brands, including Renault, to engage with the challenges of the domestic market and the many opportunities it provides. It is also a critical first step for Chinese brands into international markets.

Renault and Formula 1 have, however, gone beyond the annual Grand Prix to see China playing a much more integrated role in the future of the sport. Together with its subsidiary Renault China and DRAC, Renault Sport Racing has committed to a programme to raise awareness of motorsport including sponsoring an EV racing team of the Huazhong University of Science and Technology (HUST) in 2017. The Asian Formula Renault Series has likewise attracted a number of Chinese interests. The transition from regional racing to international has, however, to date, been difficult.

Renault Sport Racing is now a leader in this regard, recruiting two top Chinese young drivers, Guanyu Zhou and FIA Formula 3 driver Yifei Ye, to its prestigious Renault Sport Academy. Guanyu and Yifei will benefit from a full integration to a manufacturer F1 team with guidance in engineering, physical training, media briefings and career management to prepare them for the next stages of their career.

"Driving the Renault-powered E20 Formula 1 car at the Shanghai International Circuit will be another fantastic opportunity for me. It’s made even more special given that it’s the 1,000th race in Formula 1 and I’m playing a role in celebrating this long history with a demonstration run in an amazing car. It will actually be my first time driving at the Shanghai Circuit, but I have been there to watch a race. In fact, I was there in 2005 when Renault won its first world title. I can’t wait to have a go at this really good circuit and put on a show in front of the home fans; it’s going to be a proud moment."

"Renault holds several good memories at the Chinese Grand Prix. Fernando Alonso won with Renault in 2005 and Sebastian Vettel with Red Bull-Renault in 2009. In April 2017, the R.S.2027 Vision made its global premiere at the Shanghai Motor Show, which represented Renault’s commitment to F1 and its vision of F1 in the coming decade."

"Renault and Formula 1 are now looking to the future in different ways and we see China increasing its role in this story. We are proud to invest in Chinese motorsport on multiple levels. With two of the most promising Chinese talents in the ranks of the Renault Sport Academy, we could not miss the opportunity of supporting the efforts from the commercial rights holder to promote our sport in the country with our running show car."

"The opportunities China presents for global brands in its domestic market are unprecedented and indeed Groupe Renault sees China as a strategic market", added Francois Provost, Chairman of China Region, Senior Vice President, Groupe Renault.  "We have been delighted to use Formula 1 to help grow the Renault brand in recent years, but also to attract premium Chinese brands such as Tmall, who have international aspirations. We also recognise China itself has aspirations in F1. Having conquered multiple sports, including gymnastics, swimming and skating, motorsport is the next frontier. We are pleased to be a large contributor to Chinese interests in this regard with our support of young, upcoming talents Guanyu Zhou and Yifei Ye, but also to paving the way for many others to follow in their wake."

"This weekend is an important milestone in the history of Formula 1, which is celebrating its one thousandth Grand Prix here in China. We are pleased that Renault is one of the stars of the show, not only on track with Nico Hülkenberg and Daniel Ricciardo, but also in Shanghai where, for the first time ever, a Formula 1 car will be driven through the streets of the city, thanks to the efforts of the French car manufacturer. It's even more exciting to see the enthusiastic reception given to Guanyu Zhou, the first Chinese driver to have a role in a Formula 1 team. The youngster is also one of the rising stars of the FIA Formula 2 Championship. It’s proof if proof be needed that this country has an enormous potential for growth in interest in Formula 1. Once again, Renault has shown its support for our efforts to make this sport ever more popular in all corners of the globe and especially to bring it even closer to its fans."

This year, Groupe Renault and DRAC renewed its partnership with Tmall in F1. This is further proof of Renault’s “In China, For China” strategy. The three parties will promote cooperation in such sectors as technology, EV, new retail and services. To date, the Renault Tmall flagship store has been formally launched, while the Tmall logo appears on the nose of the Renault R.S.19.

Nineteen-year-old Guanyu hails from Shanghai. Earlier this year he joined the Renault Sport Academy to benefit from it comprehensive support programme. In addition to his RSA duties, he competes in the FIA Formula 2 Championship and is Renault F1 Team’s Development Driver, conducting simulator duties to support the team and its race drivers, Nico Hülkenberg and Daniel Ricciardo. The role made him the first driver from the People’s Republic of China to occupy a Formula 1 role with a manufacturer team in recent years.