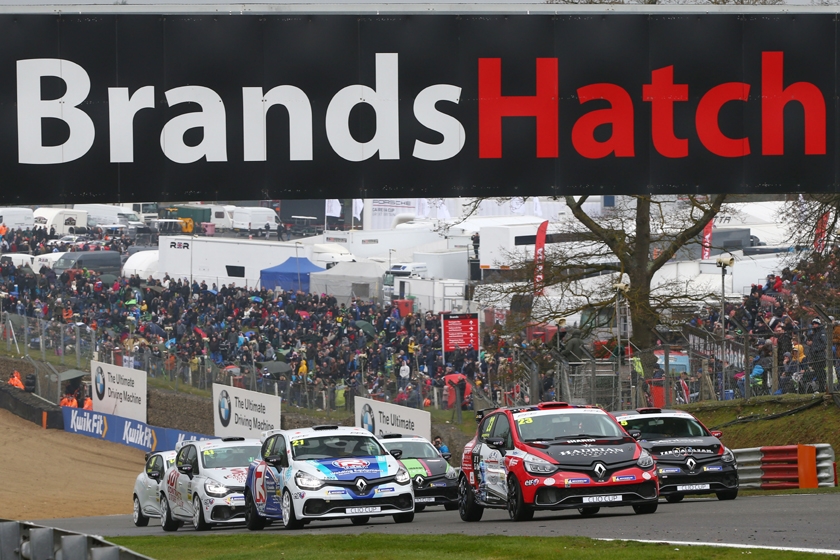 Max Coates (Scorton) has been declared the winner of both opening rounds of the 2019 Renault UK Clio Cup season at Brands Hatch after his chief rival Jack Young (Belfast) received a penalty.

Coates had led all the way from pole position to win the season’s opening round, held on Saturday (6 Apr). He also set the fastest lap for two bonus points, although MRM driver Young pushed him hard in the opening laps and again in the closing stages.

While Young settled for second position, Brett Lidsey (Northfleet) took third to make it two MRM drivers on the podium after coolly resisting attacks by Team HARD pair Ethan Hammerton (Northallerton) and Jade Edwards (Northampton). For Young and Lidsey, this was their first time on the UK Clio Cup podium…

Round two, held on Sunday, received vast levels of exposure with live coverage on free-to-air television channels ITV4 and ITV4 HD (also simulcast to mobile devices) while Brands Hatch itself was packed out with tens of thousands of spectators watching trackside.

On a greasy track surface, 17-year-old Young took the lead away from the line and over the next 22 laps held off Coates by just under a second for what appeared to be his and the MRM team’s first win in the championship.

However, officials later applied a one-second time penalty to Young’s race time which demoted him to second and made Coates the winner (by 0.132s). Young’s penalty was for having contravened the regulations during a Safety Car period…

Bonus points for setting the fastest lap and managing to lead the race (when his car momentarily nosed ahead of Young’s at mid-distance) meant a second straight maximum score for Coates.

He thus holds an 11-point advantage over Young at the top of the championship as the title race now heads to Donington Park on the Derbys-Leics border for rounds three and four on the weekend of Sat 27/Sun 28 April.

Elsewhere in Sunday’s race, Lidsey followed up his first podium result from Saturday with another strong third place as, behind, Edwards just held off R-Tech/MRM’s Ben Davis (Witney) as they celebrated their best results to date in fourth and fifth respectively.

Race two’s revised result also means that Team HARD leaves Brands Hatch with a slender two-point lead over MRM in the Entrants Trophy standings. Young sits top of the Graduates Cup table for younger drivers in their first full season in the championship.