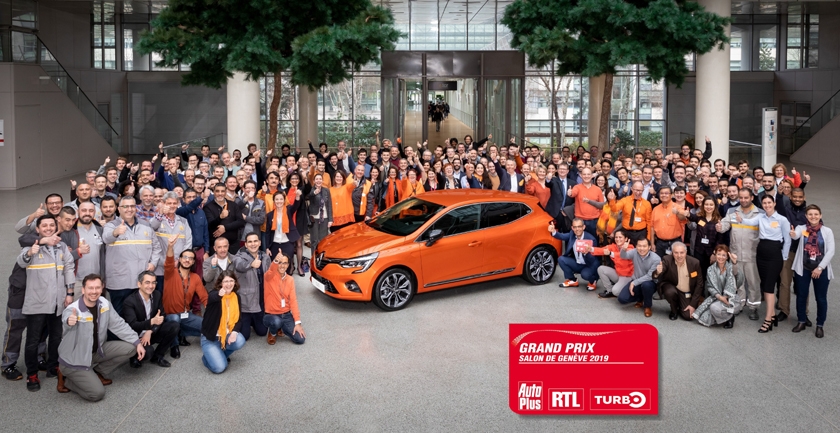 While it has just been presented at the Geneva Motor Show, the All-new Clio won its first award!

The general public elected it as the best Production Car of the 2019 Geneva Motor Show at the Auto Plus / RTL / Turbo Grand Prix. A great reward for the Groupe’s iconic city car, which won by a majority of 56% of the votes the battle between 8 production models presented at the show.

The All-new Clio opens a new page in the saga that began in 1990. Almost 30 years later, the Clio was already sold at 15 million units, becoming the best-selling French car in the world. 2019 marks the beginning of this fifth generation, determined to remain the leader in its segment. Clio will be able to count on its spacious and innovative interior, with the widest screens in its category coupled with the brand new Easy Link multimedia connected system. It is also a pioneer for Renault and for the segment in many aspects. New Clio inaugurates the new E-TECH hybrid technology and advanced driving assistance (first step towards the autonomous vehicle).

"We are delighted to see that the public is enthusiastic about the All-new Clio's design. From the first glance, the interior revolution is striking, with a Smart Cockpit focused on technology, comfort and roominess for the driver and all passengers. New Clio is a versatile car whose on-board technology will make our customers' daily lives even easier." comments Antoine Genin, Vice President of Interior Design.

"This is the first award for this new Clio and all the teams that have worked to create the best Clio ever. We are pleased to see that this internal enthusiasm is also widely shared and amplified by the public and many fans. It is a true sign of confidence in Renault and New Clio, which inaugurates a range of future products that are connected, electric and autonomous." says Olivier Brosse, Program Director of the New Clio.