Victor Martins leads the first collective tests of the season 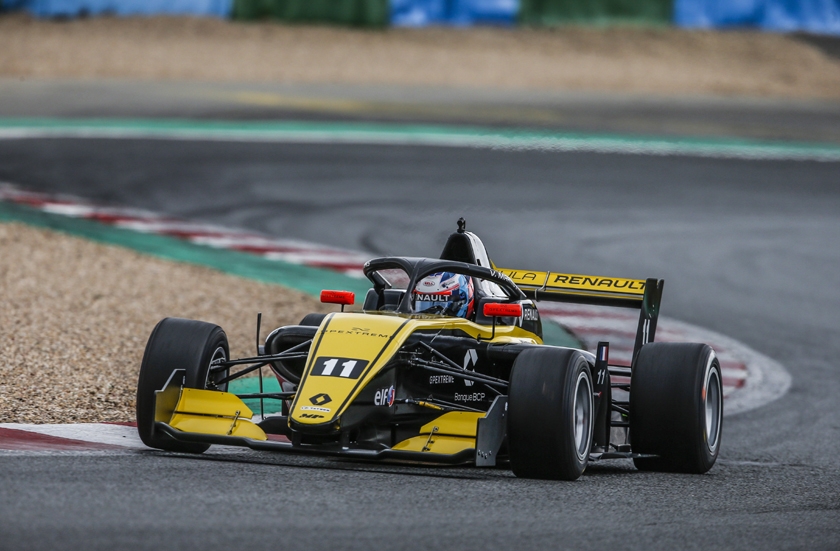 On Tuesday, the season officially kicked off at Circuit Nevers Magny-Cours. Throughout this rain-hit day, the teams were able to take stock of their new Formula Renault FR-19s in putting in 631 laps, or nearly 2,800 kilometres.

To begin their preparations for this season with a brand-new car, the competitors made their way to Magny-Cours for the first collective tests of the year.

Esteban Muth (M2 Competition) was the first to leave the pits to put in an installation lap on a damp track surface. The conditions improved throughout the morning and the drivers switched to the Hankook slick tyres in the final hour of running. Victor Martins moved to the top of the timing screen with a lap of 1:36.196s ahead of SMP Racing protégé Alexander Smolyar and Lorenzo Colombo (MP Motorsport). Rookies Caio Collet (R-ace GP) and Amaury Cordeel (MP Motorsport) completed the top five.

In the afternoon, Ugo de Wilde was soon leading the way, but the rain returned at the 90-minute mark. The contenders got back in the cars to gain experience, build confidence and acquire data, but no one was able to beat the morning benchmark time. With his lap of 1:37.125s; the Belgian driver lead from Alexander Smolyar, Frank Bird (Arden Motorsport), Sébastian Fernandez (Arden Motorsport) and Kush Maini (M2 Competition).

Victor Martins (MP Motorsport): “New season, new car, and new team… That makes for a lot of changes, but everything is going well for the moment! This morning, we focused on analysing the new car in order to put us in the best conditions. The goal is to get comfortable with the team over the three days, to work well and to go for the title together. If everything goes like it did today, which was a productive and nice day, I am quite confident!”

Alexander Smolyar (R-ace GP): “This season will be really exciting with this brand new car! I couldn’t wait to be at the collective tests and I am thrilled… We find something new on each lap! The car is a bit heavier, you can feel it especially in the slow corners, but it brings a physical challenge. I am also beginning my relationship with a new team and my goal this season is clear: I want to win the title and I will do whatever it takes to do it!”

Ugo de Wilde (JD Motorsport): “It was tough to understand the Renault engine and the Hankook tyres in the rain, but I am satisfied with the work put in with the team and the progress I made throughout the day. This new Formula Renault represents a huge step forward compared to the F4. There is a lot more downforce, a higher top speed, but it is also wider, heavier but a lot nicer on a track like Magny-Cours that has a mix of fast bends, heavy braking zones and slow corners. I have not yet set any goals for the season. I prefer to wait until after the collective tests, but one thing is sure: we will do everything to put in the best possible season!”

Frank Bird ready to come back!

Frank Bird (Arden Motorsport): “I’m aiming to return in the Formula Renault Eurocup and I should be able to finalize this in the next few days! With my experience, I know that I can become more consistent and aim for the top 10 more consistently, even the top 5. So far so good with Arden Motorsport. We did a good job, I get on well with the team and the engineers and we set the third best time in the afternoon. I hope that we can continue like this tomorrow and Thursday. And although the tyres bring a different character to the new car, it feels good with its extra downforce and power!”

Mehr in dieser Kategorie: « The All-new Renault Clio: The icon of a new generation fully revealed at Geneva Motor Show Renault unveils Alaskan ICE Edition, a show car with an enhanced design that announces a limited series that will be available from September »
Nach oben