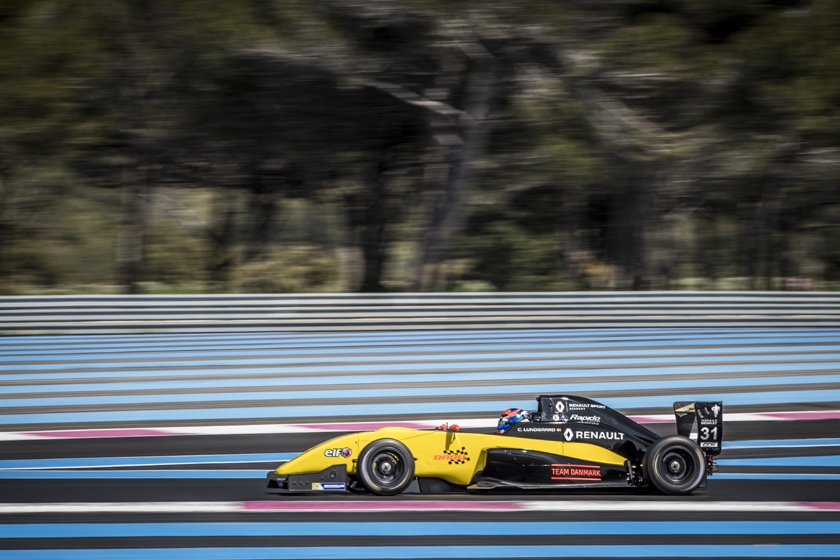 Christian Lundgaard (MP Motorsport) was quickest on day one of the Formula Renault Eurocup collective tests at Circuit Paul Ricard.

The Renault Sport Academy driver got the better of Oscar Piastri (Arden Motorsport) by a mere 0.001s. The two rookies were followed by Yifei Ye (Josef Kaufmann Racing). Logan Sargeant (R-ace GP) set best time in the morning session on the track that will host the opening round of the season from April 13-15.

28 drivers are on hand for the second 2018 pre-season test that is being held on the re-surfaced and slightly modified Circuit Paul Ricard that will host the F1 French Grand Prix in June.

Straight away, the pace was elevated with the record established by Lando Norris in 2016 being beaten. The time was lowered even further in the final half hour before the early stoppage provoked by Clément Novalak (Josef Kaufmann Racing). Logan Sargeant led the way with a lap of 2:01.881s. Christian Lundgaard, Oscar Piastri, Alex Peroni (MP Motorsport) and Yifei Ye completed the top five.

In the afternoon, Yifei Ye was the first to improve the morning benchmark time, but the Chinese driver was dislodged by Oscar Piastri and Christian Lundgaard. With a time of 2:01.083s, the Danish member of the Renault Sport Academy set best time of the day by 0.001s.

Christian Lundgaard (MP Motorsport): “Paul Ricard is among my favourite circuits, but I wasn’t as fast as expected when I was here in November. Today, our performance showed the progress we’ve made and we need to keep the momentum going. More than the new track surface, the biggest change is where some of the corners have been widened, especially the T1-T2 section and T5, which is a clear improvement.”

Oscar Piastri (Arden Motorsport): “It is always a bit annoying to be beaten by 0.001s! Thankfully, it is just testing and we were in it all day long. I hope we will do just as good tomorrow. My goal is to win the rookie crown, and if it all goes the way it did today, I can aim for the top five in the general classification. I just need to find 0.002s tomorrow to be happy!”

Logan Sargeant, always among the leaders

Logan Sargeant (R-ace GP): “The morning session went well and the car was really good! I was able to set a good time at the end of the session and in the afternoon it was another promising showing. We need to make more progress tomorrow and I’m confident we will do so. I am aiming for the rookie title, but I want to run as high as possible in the order in each race. We will see where we are at the end to see where it has taken us!”

Arthur Rougier back to the source of his title

Arthur Rougier (Fortec Motorsports): “It is a real pleasure to come back to the track where I won my French F4 title. However, I had to relearn the circuit because of the modifications made for F1. The grip level has changed as well as some of the corners. T1 now has only one apex and it is a positive change. Despite a few niggles, everything is going good for now and we know which direction to go. The entire team is motivated and we are convinced that all of our work will pay off. “

A new start for Najiy Razak

Najiy Razak (JD Motorsport): “I am thrilled to have joined JD Motorsport. I sincerely believe that the team can help me progress and I can already feel the effects. I still need to better understand the change of grip during a session and the use of new tires to be able to attack fully, but we have a good margin of progress on such a technical circuit as Paul Ricard.”

Thomas Neubauer has the bit between his teeth

Thomas Neubauer (Tech 1 Racing): “After being ill at Hockenheim, my seat has created some back pain here. In spite of this, I am getting closer to my team mates and this is in line with my objectives. I want to regularly be in the top ten in qualifying to aim even higher in the races. After a positive learning season, I wanted to absolutely remain in this environment where I know the team, the car, the circuits and the engineers… With all of these parameters in hand at Tech 1 Racing; I am full of confidence and have the bit between my teeth for the start to the season!”

Mehr in dieser Kategorie: « A 38-strong Clio Cup field will add spice to the Coupes de Pâques! For 120 years Renault has been committed to making its customers’ lives easier every day »
Nach oben