A 38-strong Clio Cup field will add spice to the Coupes de Pâques! 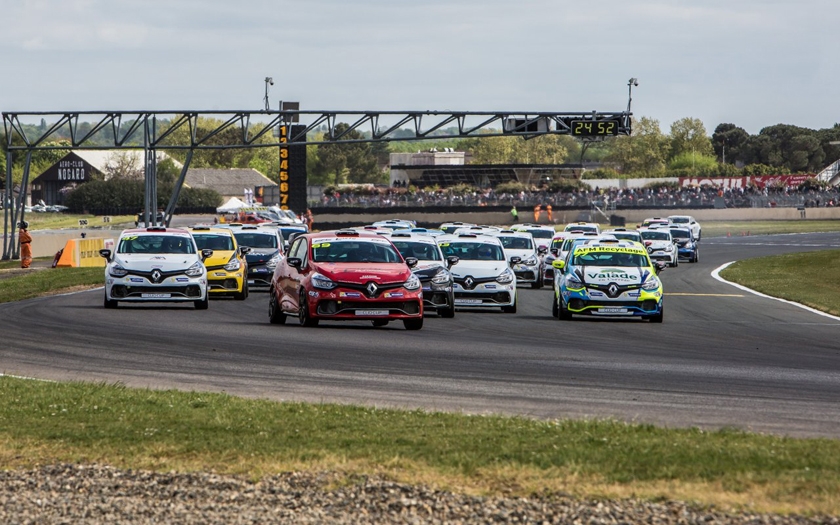 The Clio Cup France will provide spectators with a thrilling spectacle when the season kicks off on French circuits at the Coupes de Pâques at Nogaro on 1-2 April. The field comprises no fewer than 38 cars – a record since 2009 – so it’s anybody’s guess who will succeed Marc Guillot!

Season after season the Clio Cup France’s success story shows no sign of abating, quite the opposite, in fact! Every year more and more drivers enter for the championship attracted by the sheer pleasure of driving, the convivial ambiance in the paddock, the overall level of competition in the three categories and the capped running costs. The opening round on the Nogaro circuit has attracted 38 entries from 15 teams. Not since 2009 has there been such a huge field!

At Nogaro one of the principal threats will come from Thibaut Bossy (TB2S), another driver-tuner who will be racing close to home. In 2017 he won the two races in the Gers and went on to score a raft of podium finishes culminating in a place in the top 5 overall.

Last year, Benoit Castagné (Raiwoit Racing) was in the running for the title for a long time and he’s back again with even bigger ambitions. His 2017 season ended with his duel with Nicolas Milan at Paul Ricard and it’s very likely that they will go head-to-head again at Nogaro on which Castagné set pole last year.

It’s the same story for Dorian Guldenfels (GPA Racing), the other pole setter at Nogaro in 2017. After dominating the Junior category in his first season in the Clio Cup France, the former kart racer is now aiming for the title in the overall classification and he will be challenging for victory throughout the season.

Jérémy Curty (TB2S), Pierre-Étienne Chaumat (TB2S), Corentin Tierce (Tierce Racing) and Alexandre Gadois (Autosport GP) who were all in the top 10 last year should be potential podium contenders. Keep an eye out for drivers making their comeback to the Clio Cup like Julien Neveu (Autosport GP), who finished seventh in 2016 and went off to try his luck in LM P3 last year.

Yoann Baziret, absent from the paddocks since his third place in 2012, is also back this year with his team, Setup Racing. The Norman outfit will enter five Clios including one for Baziret’s brother, Julien. Anthony Jurado’s progress will also be closely watched as he has raced mainly in SSV up till now. It will be the same story for Arnaud Gautier, winner of the 2009 French Rally Cup. The driver from Normandy is loyal to Renault Sport as in the last few seasons he has raced Clio R3s and Mégane N4s.

JUNIORS: THE CARDS HAVE BEEN RESHUFFLED

Eight drivers have entered for the Junior category. The hot favourite is Corentin Tierce, last year’s runner-up behind Guldenfels. Drivers back for the second year like his brother Pierre, Edwyn Traynard (Autosport GP), and Adeline Prudent (Prudent Compétition), the only woman driver in the field, will provide him with tough opposition. The category has been boosted with the arrival of newcomers like David Bouet (Autosport GP), Loïc Brondeau (TB2S) and Marc de Fulgencio (Team VRT) who will be all vying for the podium although the latter cannot score points as he’s racing under a Spanish licence.

Unlike the others, the Gentlemen’s category remains very stable as the top 5 in 2017 are back to continue their battle. Mickaël Carrée (T2CM) will defend his title against Samuel and Emmanuel Raffin (Autosport GP), Stéphane Auriacombe (Tierce Racing) and David Pajot (Vic’Team). At the end of last season Pajot put on an excellent series of performances and he is determined to continue in the same vein in 2018.

However, these “youngsters” could be put in their place by a serious rival who’s making his comeback to the circuits at the age of 70! - Luc Galmard. He was a regular in the Renault Sport single-make formulas in the 1980s and 90s, ranging from the Coupe R5 Turbo to the R21 Europa Cup as well as the Coupe Clio 16S (2nd in 1995). The hairdresser from the Sarthe says he can’t wait to get back into motor racing after a 15-year hiatus. Keep a close eye on him!