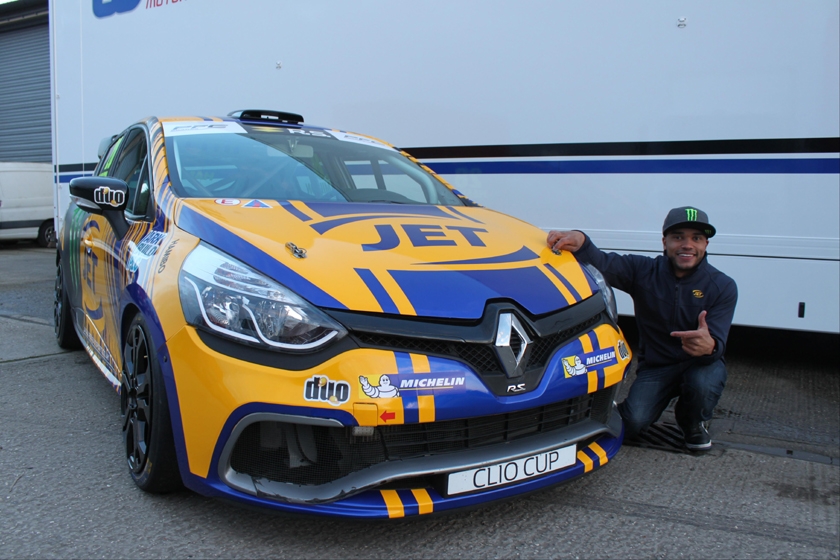 Nicolas Hamilton (Welwyn Garden City) is confident he can become a regular front-running name in the Renault UK Clio Cup in 2018 as he prepares for his first pre-season test of the year at the famous Brands Hatch circuit in Kent today.

Hamilton will rejoin the WDE Motorsport team for the forthcoming season after contesting five race events for the Ashford based squad last year.

Born with Cerebral Palsy, he is an ambassador and inspiration for disabled athletes and to compete in the Clio Cup requires modifications to his car (such as a hand clutch and minor pedal adjustments).

Hamilton, also the 25-year-old brother of four-times Formula 1 World Champion Lewis Hamilton, commented: “I’m super excited about getting back in a car as, after Silverstone last year, I was contemplating quitting motor sport all together. Now after working as hard as possible to raise the budget over the winter, I am so proud to have independently secured the support of my sponsors to give myself the best opportunity this year.

“The Clio Cup cars are terrific to drive and, with all the data you’re able to work with and the high level of competition, it’s a championship that stands out in terms of driver development.

“Crucially for me, I’ll be doing some actual testing which I’ve never had an opportunity to do since I first started racing in 2011 (in Clio Cup) or even when I had a spell in the British Touring Car Championship a few years ago.

“I’m aiming to consistently be inside the top ten which I showed was possible during parts of last year with barely any practice. I’m going into this season with a ‘fresh start’ and better prepared than ever – so much so that it actually feels like I’m starting my whole career again…”

Hamilton’s brand and profile makes him a big hit with the vast numbers of public that come to see the Clio Cup race alongside the BTCC. Notably for 2018 he will have a new-look car, with JET Petroleum becoming his primary sponsor along with Monster Energy, DUO Plc, BigChange Apps, Ark Build Plc and Ark MEP Plc.

He continued: “There’ll be a lot of yellow which is one of the colours that stands out most on TV! I just need to be up near the front a bit more, that’s all…

“The Clio Cup is a great environment to build your brand and your sponsors’ brands and I’m even looking to up my presence a bit more this year – JET are very family orientated and that connects with my story and how I want to inspire people.”

WDE Team Principal Wayne Eason said: “We’re delighted to have Nic back as part of our team in 2018. Despite what people might think, he has to work just as hard as anyone else to put his racing budget together and I’ve never seen him so hungry to succeed. I strongly believe he can make considerable gains in his performances with us this year and will play an extremely important role in our results.”

The 2018 Renault UK Clio Cup gets under way with its opening two rounds at Brands Hatch on Sat 7/Sun 8 April. All 18 of its rounds will take place at the BTCC’s high-profile events meaning it appears in front of huge trackside crowds (38,500 on average in 2017) and also live on ITV4.

Renault Sport’s UK Motorsport Championship Manager Will Fewkes said: “Nic’s inspirational story continues to capture the imaginations of thousands of people and we are very pleased to see him choosing to race in the Clio Cup again. His determination is second to none and this could lead to some great results in 2018.”