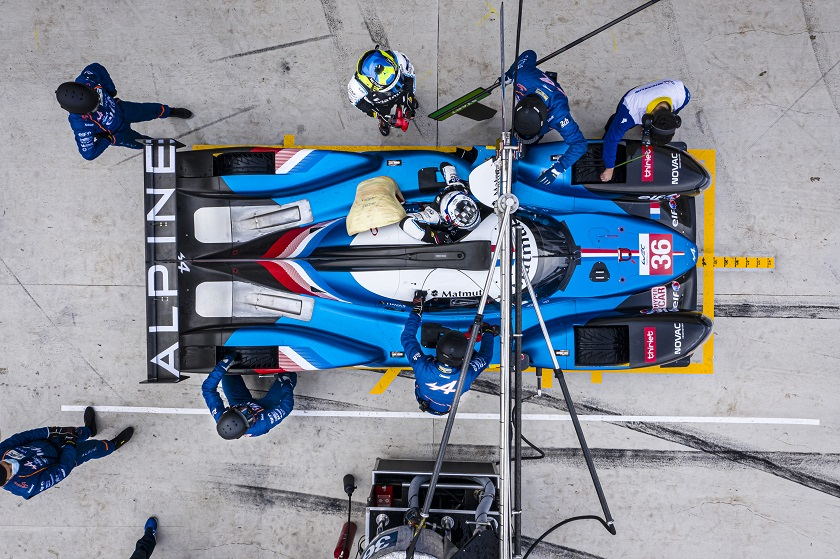 In Formula 1 as in endurance racing, preparation for competition involves a major step: the moulding of the seat. Nicolas Lapierre, the most experienced driver in the new Alpine Elf Matmut Endurance Team trio competing in the premier class of the World Endurance Championship (FIA WEC), moulded his own at Signatech's premises in Bourges (France). The driver, a key contributor to Alpine's recent world titles, looks back on this key stage.

The moulding of the seat: a luxury? Certainly not! In fact, it is an essential stage in the preparation for competition, whether in Formula 1 or endurance racing. Moreover, in the latter discipline where races are punctuated by stints, a change of driver also implies a change of seat. With high deceleration rates under braking and up to 4 g of weight in the corners, the seat has to fit each driver's body to the millimeter. As the only part of the car that is entirely made to measure, the seat is therefore a central object with which the drivers have a very special relationship.

"A prototype in endurance racing is like a shared flat, you look for the compromise that suits everyone. But there is ONE element that is tailor-made for each driver: it is the seat." Nicolas Lapierre, Alpine Elf Matmut Endurance Team driver.

The bucket: the seat of performance

Alpine is continuing its rise to the highest level of motor sport by tackling the challenge of the Hypercar this year. Managed by Philippe Sinault, the Alpine Elf Matmut Endurance Team is fielding the Alpine A480 with the number 36 in the premier class of the World Endurance Championship (FIA WEC) and the Le Mans 24 Hours. On track, the car is entrusted to the drivers Nicolas Lapierre, André Negrão and Matthieu Vaxiviere.

Nicolas Lapierre, who is a key member of the trio due to his seniority and his track records, explained the importance of the central element, the seat, when it was moulded at the Signatech premises in Bourges (France).

The seat is first and foremost an essential element of comfort. During an endurance race, with driving times that can sometimes exceed three hours, vibrations, hollows, bumps, heat, noise and the fatigue that results from these extreme conditions, it allows to "feel" the single-seater with the whole body: "It is important to have a moulded seat. First of all to feel comfortable and to get a good feel for what the car is going to do."

The moulded seat also optimises driving efficiency. Perfectly adjusted to the drivers' morphology, it allows them to give the best of themselves: "being well installed in the car, helps us to make fewer mistakes, to be well concentrated focused only on the driving, to be at one with the car".

Finally, it's an essential safety element: "In terms of safety it's important to be well installed, well strapped in and not to move at all in the car."

Making the bucket, a methodical process

As you can see, the seat is an essential element in motor racing. But how do you go about making it?

Dressed in his suit, gloves, shoes and helmet, Nicolas Lapierre is ready. He slips into the prototype and settles into the standard seat covered with a plastic bag filled with expanding polyurethane foam and gets into the driving position. The foam, which is still liquid, fits his body perfectly. About fifteen minutes later, the polyurethane has hardened, and the driver can get out of the car.

After the moulding, the bucket is removed from the vehicle. The technicians then make cuts to make it as light and efficient as possible, and then sand the hardened surface to remove the edges. The moulded, cut and sanded seat is then tested on the track to make any necessary adjustments - re-cutting or adding a few millimeters of foam - before being covered with a fireproof material.

The final step is the addition of a handlebar to allow each driver to retrieve his bucket when changing drivers.

Once finished, Nicolas Lapierre's bucket will weigh only 1.3 kg!

A privileged moment, with victory in sight

For Nicolas Lapierre, far from being trivial, "the moulding of the seat is an important moment, a key stage in the preparation of the season".

It is also a moment of conviviality with the team: "We take our place in the vehicle, we make our position, we take our marks and we are all together to make this seat which will be the base of our crew. It's a moment of sharing with our mechanics, our engineers and our team members."

And above all, "it's the start of a great adventure that will hopefully lead us to victories in the WEC and the 24 Hours of Le Mans. "