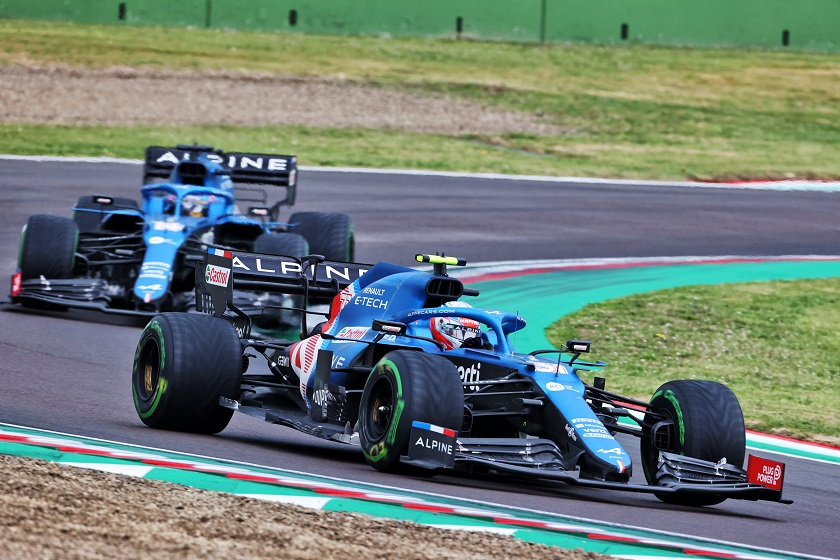 Teams were faced with a difficult decision before the start of the race after a sudden downpour of rain an hour before lights out left some parts of the circuit extremely wet. Esteban opted for the full Wet tyres with Fernando on the Intermediates. On the laps to the grid, Fernando ran wide out of Turn 7, clipping the wall, meaning he had to change front wing.

In slippery conditions, both drivers dropped outside of the top ten with Esteban switching to the Intermediates on lap two under the Safety Car.

Things began to stabilise and, as the track started to dry, dry tyres looked the best option; Esteban fitting Mediums on lap 27 and Fernando following suit a lap later.

Esteban switched to the Softs on lap 31, before a red flag brought the race to a stop following a collision between Valtteri Bottas and George Russell on the entry to turn two.

The race resumed with Fernando twelfth and Esteban thirteenth, the Frenchman switching to Mediums during the red flag stoppage, for the sprint to the end. Both drivers immediately gained a few places and duelled for the final points-scoring position.

Esteban was heaping the pressure on Kimi Räikkönen for ninth but could not make the breakthrough on the experienced Finn. Fernando was just behind as he looked to sneak his way into the points. At the flag, Esteban held onto tenth with Fernando narrowly adrift.

Both drivers inherited a place after the chequered flag, following a post-race penalty for Räikkönen. Esteban scoring two points in ninth with Fernando returning to the Formula 1 points for the first time since the 2018 Singapore Grand Prix in tenth.

Esteban Ocon, started P9, finished P9 "It was a challenging race today in hard conditions. There were lots of opportunities out there, we managed to score a point, a decent result and a good reward for the team’s hard work. There was potentially more on the table. It was a long, physical race and flat out right until the end after the restart. I had some fun fights out there, especially with Fernando. Now, we look forward to the next race weekend."

Fernando Alonso, started P15, finished P10 "It was tricky today as we had several different conditions, starting the race in the wet and finishing in the dry. I took a lot of learnings after driving in these conditions again. In Formula 1, you don’t get any preparation, and with one and a half days of testing it’s not easy. Overall, I would say it was like four race experiences all in one. I think the car is better this weekend, which is positive but it’s still very tight between a number of cars. We’ll go again in Portugal."

Marcin Budkowski, Executive Director: "We scored our first point of the season today and we had to work hard for it. Both cars had poor starts in wet conditions and lost several positions on the first lap, which is something we need to understand. In the dry, our pace was pretty decent with both drivers together on the track and coming back towards the points positions. Esteban got stuck behind Räikkönen for the final part of the race and couldn’t make the move, underlining how difficult it is to overtake here. We leave Imola with bittersweet feelings; pleased to have our first point of the season, but it was a race that didn’t go as it could have for us. We move onto the next race hungry for more."

Note: Quotes accurate at the time of writing following the provisional race results.