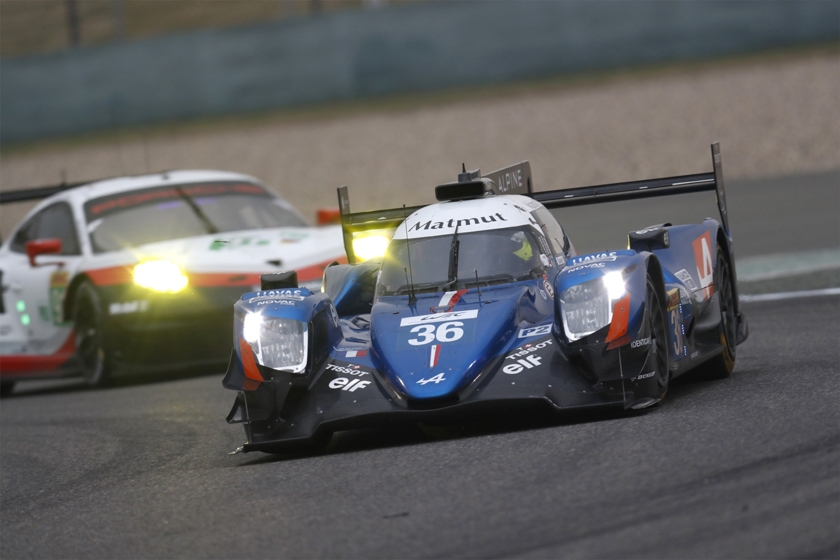 Boulogne-Billancourt, February 9th, 2018 - The list of entries for the 2018-2019 Super Season of the FIA World Endurance Championship and the 2018 edition of the 24 Hours of Le Mans was unveiled at a highly anticipated press conference held by the Automobile Club de l’Ouest.

This event was organised as part of the "Rétromobile" vintage car show, at which Alpine is celebrating the 40th anniversary of its 1978 win at the 24 Hours of Le Mans. Until 11 February, visitors can admire the four Alpine cars that competed that year: the winning A442B, as well as the two A442s and the A443.

2016 World Champion in the LMP2 class, the Signatech Alpine Matmut team will again be one of the leading contenders in its category, with the Alpine A470 still bearing the number 36.

As it aims for victory in what is an incredibly competitive category, Signatech Alpine Matmut will be able to call upon the talents of its operations team and its three drivers.

Having played a key role in winning the title in 2016, the Frenchman Nicolas Lapierre will line up alongside the Brazilian André Negrão. In the five events contested together, the two men have already won one race and scored another three podium finishes.

The crew will be completed by Frenchman Pierre Thiriet, ELMS European Champion in 2012 and winner of the WEC 6 Hours of Spa-Francorchamps in the LMP2 class last season. The experienced and pacey trio will be aiming for one thing only: the top step of the podium.

Last year, the new Alpine A470 claimed victory at the Circuit Of The Americas, whilst securing podium spots at the 24 Hours of Le Mans, the Nürburgring, in Mexico, Fuji and Shanghai. The French squad remained in contention for the title until the final round, held in Bahrain.

The no.36 Alpine A470 will be making its bow on the track this year on 6 April at the Circuit Paul Ricard (France) for the official prologue of the FIA WEC.

For the next season, we have put together a crew that combines speed and experience. The 2018 season is all the more important as it marks the 40th anniversary of Alpine’s victory at the Le Mans 24 Hours and coincides with the initial deliveries of the Alpine A110.

Since the end of the 2017 season, we have been back at work preparing for the new season of the FIA World Endurance Championship whilst looking to up our game. We are very pleased to be competing with a fast, consistent crew. Nicolas Lapierre remains the 'backbone' and provides continuity for the technical team. During his first season with us, André Negrão produced some really strong performances, so much so that he has been awarded the status of Gold driver. The crew is completed by Pierre Thiriet, an excellent Silver driver, with whom we have wanted to work for a long time. Compared with previous seasons, we are going to be able to build on our experience, since we are using exactly the same car as in 2017. This means we will save a lot of time in fine-tuning the set-up of the car at the various circuits. We will certainly be aiming to reclaim the titles!

With a solid record in single-seater racing, winning the 2003 Macao Grand Prix with Signature, Nicolas switched to Endurance in 2008. He enjoyed his first victories with Team Oreca Matmut, finishing third in the FIA WEC with Toyota in 2012. During the three seasons he spent with the Japanese manufacturer, he won six World Championship races. LMP2 class winner of the 24 Hours of Le Mans in 2015, he rejoined Signatech-Alpine for an unforgettable 2016 season, during which he won the famous Le Mans race again and claimed the LMP2 titles. A winner at the Circuit Of The Americas with Alpine last year, the Frenchman will be one of the driving forces behind the team's attempt to regain the titles in 2018.

Like his more famous predecessors, André Negrão crossed the Atlantic to acquire experience racing in Europe. Having raced in promotional formulas on both sides of the pond, the Brazilian switched to Endurance with Signatech Alpine Matmut for the 2017 season. André surprised many an observer, as he adapted quickly to the new prototypes. Although misfortune cost him an outright podium on his 24 Hours of Le Mans debut, his efforts saw him promoted to the no.36 car, in which he secured victory in Austin. With a promising first season behind him, André will be a key asset in what is an extremely competitive category.

After cutting his teeth in karting, Pierre opted to make his track racing debut in the Eurocup Mégane Trophy. A year later, he finished as runner-up in the championship before then moving into Endurance racing. Once again, the Frenchman wasted no time in impressing observers by winning two races in the Le Mans Series. In 2012, he won the first edition of the European Le Mans Series. A regular in the LMP2 et the European Championship, he took part in his first full FIA WEC season in 2017. A two-time winner in the LMP2 category at the 24 Hours of Le Mans, he is aiming to reach the very top with Signatech Alpine Matmut.