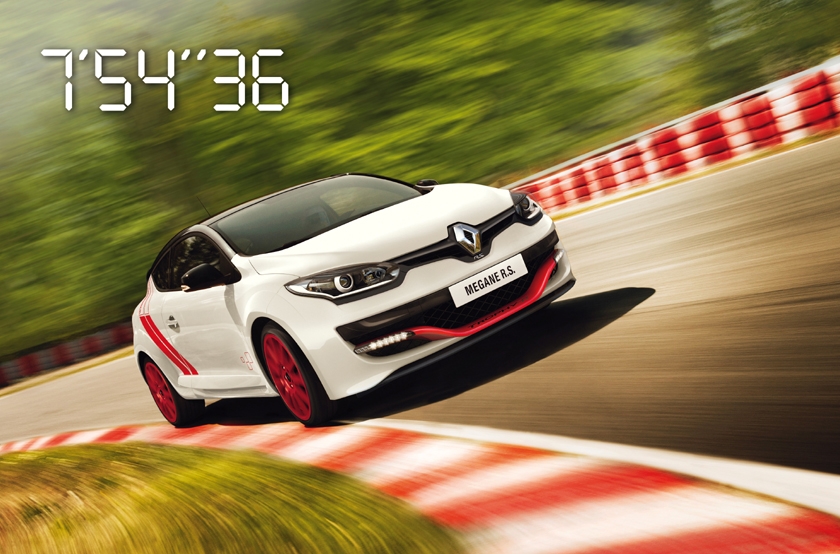 Set for launch at the Frankfurt motorshow, the Megane R.S. - Renault's compact sports car - is poised for a spectacular comeback. In 2017, Renault Sport celebrates its 40th anniversary yet its mission remains unchanged: to create a clear link between motorsport, the brand’s commitment to Formula 1 and its standard production cars: “From the racetrack to the road". In two generations, and almost 16 variants, the Mégane R.S. has come to symbolise this philosophy. Thanks to a number of motorsport-derived technologies, the Mégane R.S. has become a benchmark in the world of high-performance road cars.

Back to the birth of Mégane R.S.

A fresh initiative from Renault Sport

Renault’s sporting traditions stretch back way farther than the original Megane R.S. It was in the 1950s, under the influence of Amédée Gordini, that the company began to offer mass-produced sporting vehicles which went on to enjoy considerable success. They included some of the most iconic cars of all time, not least the R8 Gordini of 1964.
In the saloon segment, the Megane R.S. became the latest model in a distinguished line that began with the R12 Gordini, which heralded the switch to front-wheel drive during the 1970s. The R11 Turbo created waves during the subsequent decade before ceding its crown to the Renault 19 16S in the 1990s.
The Megane 2 R.S. was Renault’s response to the need to expand its sporting range.
Originally unveiled at the 2003 Frankfurt Motor Show, the Mégane R.S. hit the road for the first time the following year.

Although the R.S. might have looked like a standard Mégane 2 from a distance, a number of key features pointed to its sporting prowess, like its twin exhaust tail pipes, an R.S. cue as previously seen on the Clio V6. Its assertive front-end design included a bespoke aerodynamic bib, a broad air intake to facilitate engine cooling and wide-set foglamps. The Megane R.S. also had a distinctive rear spoiler and its sporting credentials were underlined by bespoke 18-inch aluminium wheels and Renault Sport badging.
From launch, the car benefitted from an exclusive palette of paint options including Blood Orange, Technique Grey and Arctic Blue.

An iconic engine: the F4RT

The success of the first-generation Megane was underpinned by its engine and chassis. The technical team opted for proven technology to power the newcomer, choosing the F4RT version of the well-known F-type block. Renault had previously used this four-cylinder turbo in the Avantime and Renault Laguna, as well as under the bonnet of the Clio RS. Renault Sport’s experts tuned this 165-horsepower powerplant to deliver 225hp in the Mégane R.S. Christened F4RT RS, it also complied with Euro4 emissions standards.

Finally, if this Mégane stood out particularly it was due to a chassis that featured a remarkable technological breakthrough: independent steering axis front suspension.

2005-2009: FROM THE RACETRACK TO THE ROAD, THE MEGANE R.S. ROCKS THE COMPACT SPORTS CAR ESTABLISHMENT

Over the course of its production run at Renault’s Dieppe factory from 2004 to 2009, the Mégane R.S. spawned no fewer than four different versions – two facelifts and a dCi variant – to meet Renault Sport’s stated ambition to carry over the benefits of motorsport-honed technologies across to its road-going vehicles.

It was in this spirit that in 2005, just nine months after the introduction of the original Mégane R.S., a ‘Trophy’ edition appeared, fitted with the even more radical Sport  chassis, stiffer springs at both the front (+25%), and rear (+77%), a 1mm-smaller anti-roll bar, damper stops and the option of deactivating the Electronic Stability Programme (ESP).
With this new chassis, Renault Sport split its Mégane R.S. offering into two distinct versions – a theme that would continue through the following generations (with the Sport and Cup chassis).

Lapping up the awards

Over the course of its existence, the Mégane R.S. has picked up countless prestigious accolades. France’s Echappement magazine recognised its qualities with no fewer than three ‘Sports Car of the Year’ awards (for the F1 Team R26 in 2007, the R26.R in 2008 and the Trophy-R in 2014). British publication Evo similarly sung the praises of the F1 Team R26 in 2008.
Together with the other models in the Renault Sport range, the Mégane R.S. picked up a coveted Top Gear award in 2009 in the ‘Manufacturer of the Year’ category.

In 2009, the next generation of the Mégane R.S. was unveiled with a sharp, dynamic coupé look, instilling it with a bolder identity – that of an everyday sports car that was also capable of delivering flawless performance on a racetrack.

The R.S. Monitor: learning to drive like a pro

Just as Renault’s innovative independent steering axis front suspension layout was synonymous with the first-generation model, so the new Mégane R.S. was characterised by the introduction of the R.S. Monitor. Exclusive to Renault Sport, this technology uses sensors and accelerometers to record a variety of information about the manner in which the vehicle is being driven before displaying this data on the central screen. This information includes the stresses on different parts of the engine (turbo pressure, oil temperature) and general performance indicators such as the level of power and torque utilised, adding an extra dimension to the driving experience. All of the above data can subsequently be collated for computer analysis, racing driver style.

In keeping with the trend that has been maintained ever since the model’s first generation, every new limited-edition version and evolution has been progressively sportier and more radical than the one before.

In 2011, a Trophy variant of the Mégane 3 R.S. appeared. Based on the Cup chassis, a more potent engine produced 265hp and 360Nm torque, which made it the fastest front-wheel-drive car on the market. While just 500 examples were initially slated for production, the Mégane 3 R.S. Trophy proved to be such a great success that 1,068 vehicles ultimately rolled off the assembly line.

No telling of the Mégane R.S. story would be complete, finally, without referencing its record-breaking achievements at the Nürburgring. In almost a decade-and-a-half of existence, it has established three new lap records around the legendary German circuit’s North Loop – the fearsome Nordschleife – composed of no fewer than 154 corners and aptly nicknamed the ‘Green Hell’.
In 2008, the R26.R covered the 20.832km distance in 8m17s, before the R.S. Trophy 265 obliterated that record with a time of 8m7.97s three years later.
In May 2014, Renault Sport driver Laurent Hurgon famously broke the eight-minute barrier by completing the lap in just 7m54.36s behind the wheel of the 275 Trophy-R. As the first front-wheel drive vehicle to lap beneath eight minutes at the Nürburgring, the Mégane R.S. set the bar high as the indisputable new benchmark in its class.

2004: The first Mégane R.S. goes on sale
2005: Introduction of the Trophy version
2007: Launch of the F1 Team R26 variant and first availability of a limited-slip differential
2008: The Mégane R26-R breaks the Nürburgring Nordschleife lap record in a time of 8m17s
2010: Launch of the Mégane 3 R.S.
2015: Introduction of the Mégane R.S. 275 Trophy-R with a limited production run of just 322 cars
2017: The All-New Mégane R.S. officially unveiled at the Frankfurt Motor Show

Mehr in dieser Kategorie: « The first titles could be decided at Spa? Renault launches the first ever online time capsule on Twitter »
Nach oben