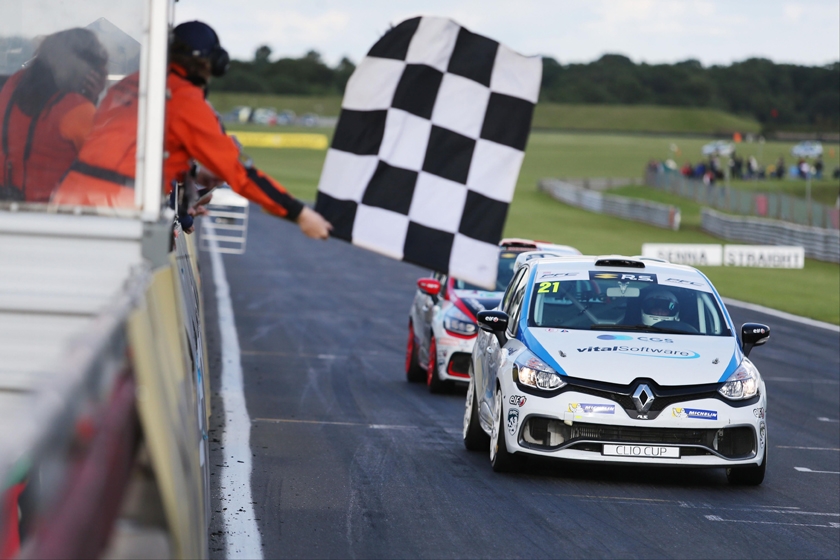 Mike Bushell (Tunbridge Wells) made it four wins in a row with victories in both Renault UK Clio Cup rounds at the Snetterton circuit in Norfolk on Sunday – results that in theory mean he could clinch the title as early as the next two rounds at Rockingham in late August.

Bushell’s race two win however was not so straight forward. A two-second lead was whittled down by Ciceley Motorsport’s charging Max Coates (Scorton) and in the end just a quarter of a second separated them at the line in a thrilling finish. Third was WDE’s Paul Rivett (Epsom Downs) who came away from Snetterton with a new race lap record – the Michelin tyre that the UK Clio Cup has switched to in 2017 again working its magic.

Bushell’s lead though is now out to 98 points and two top scores at Rockingham in Northamptonshire (26-27 August) and problems for his rivals there could see him stretch that to 166 with a maximum of only 136 to then be had from the season’s final four rounds at Silverstone and Brands Hatch.

Pattison leaves Snetterton third in the standings just ahead of Coates. Significantly nine drivers in all, including Bushell, still have a mathematical chance of becoming Champion…

Elsewhere at Snetterton there were a number of other stand-out performances. Westbourne’s James Dorlin (Barnsley) qualified on pole position for race two – the first pole of his career (although this was later denied him by a grid penalty). Pyro’s Lucas Orrock (Cambridge) celebrated his best-ever qualifying positions (sixth and fifth) and race result (fourth).

Pyro’s Nathan Harrison (Oxford) continues to lead the Graduates Cup for young, first-year drivers although his advantage over second-placed Dorlin who took two maximums in the class at Snetterton is now down to 19 points.

Rivett has taken over the lead of the Masters Cup for drivers aged over 34 from Pattison – the gap between them just 18 points. Pyro has slightly increased its lead over WDE at the top of the Entrants’ Trophy standings to 42 points with a possible 360 still up for grabs in the remaining six races…