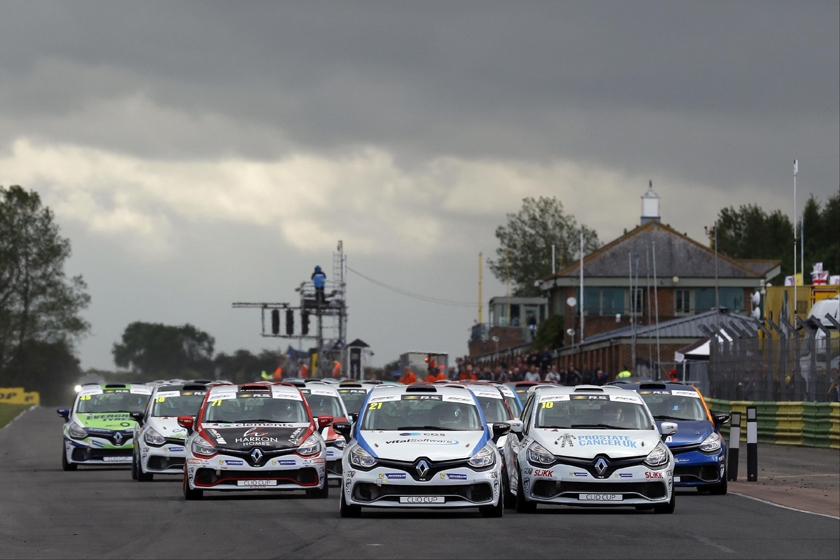 Mike Bushell (Tunbridge Wells) will take a sizeable 69-point lead into the mid-season break after taking a pair of stylish victories in the Renault UK Clio Cup’s latest two rounds at the Croft Circuit in North Yorkshire.

Team Pyro’s Bushell needed to fight back in race one, on Saturday, after an error in tricky wet conditions dropped him to third position. After re-asserting himself in the lead though he took the win comfortably ahead of team-mate Nathan Harrison (Oxford) and DRM’s Daniel Rowbottom (Kidderminster) who both added to their podium results in the previous rounds at Oulton Park.

However Bushell made no mistake in Sunday’s second race – shown live on ITV4 – and was able to lead from start to finish. But his winning margin this time was only half a second as local favourite Max Coates (Scorton) closed in with a charge that netted him the race’s fastest lap. WDE Motorsport’s Paul Rivett (Epsom Downs) took third.

As a result Bushell now holds a lead that is greater than two wins over his nearest championship rival, WDE’s Lee Pattison (Halifax), who took seventh and sixth place finishes in Croft’s two races. He has also now won five of the ten races so far in 2017 with eight more still to go – starting at Snetterton in Norfolk in late July.

Meanwhile Harrison has moved past Westbourne Motorsport’s James Dorlin (Barnsley) to take the lead of the Graduates Cup class for young drivers in their first full UK Clio Cup season. Harrison’s efforts combined with those of Bushell have also extended Pyro’s lead in the teams’ championship. Pattison continues to head Rivett in the Masters Cup class for older drivers…

There were some stand-out performances elsewhere at Croft this weekend, notably that of Sam Randon (Ashbourne) who, on his debut, qualified an excellent fourth and then second fastest on the two starting grids. Ciceley’s Jade Edwards (Aylesbury), JamSport’s Aaron Thompson (Romford) and Pyro’s Lucas Orrock (Cambridge) all enjoyed their best results to date in their first season in the championship.