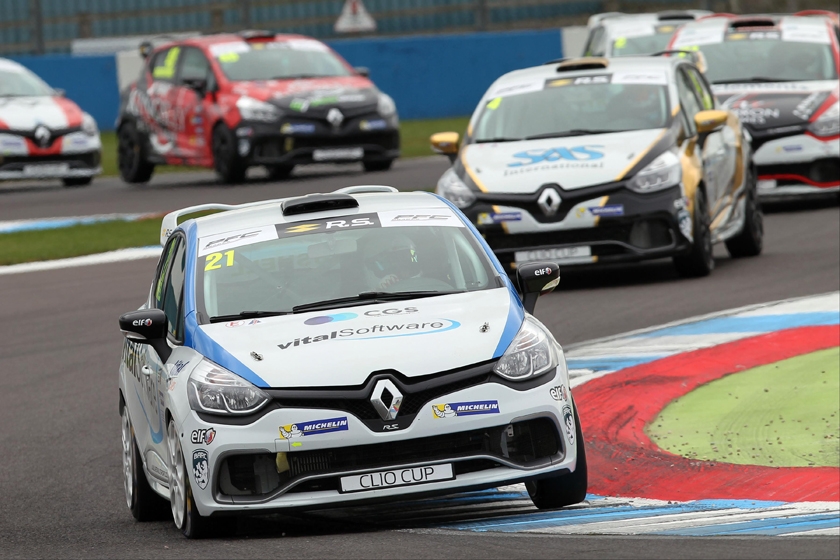 Max Coates (Scorton) and Paul Rivett (Epsom Downs) shared the victories – albeit in unusual circumstances – in Donington Park’s two Renault UK Clio Cup rounds while, for the second meeting in a row, both new qualifying and race lap records were set on the championship’s new Michelin tyres.

Meanwhile Mike Bushell (Tunbridge Wells) leads the standings prior to the next two rounds at Hampshire’s high-speed Thruxton circuit (Sat 6/Sun 7 May)...

Ciceley Motorsport’s Coates had finished race one in second place but was later excluded, only to be reinstated to the runner-up position on appeal. He was then declared the winner when officials handed Team Pyro’s Bushell, who had crossed the line in first place, a time penalty which demoted him to third.

Ultimately it came down to a four-way fight for victory between Pattison, WDE team-mate Rivett, Coates and Bushell as a sudden rain shower made life extra difficult for all the drivers whose cars were on slick, dry weather tyres.

Rivett’s car inadvertently slithered into Pattison’s and both went off the track. In an instant Coates, Bushell and the rest were through as Rivett rejoined towards the back of the field – the drama all unfolding live on ITV4.

Pattison’s car, stricken in a gravel trap, was deemed to be in a dangerous position and immediately the race was stopped with the result determined by the positions at the end of the previous lap. However because Pattison’s stuck car was deemed to be the cause of the stoppage it was Rivett who was classified the winner ahead of Coates and Bushell although the result remains provisional pending an appeal by the WDE team.

For the time being it means that Bushell leads the championship by 14 points from Coates while Rivett and Pattison are in third and fourth. Pyro leads the Teams’ championship from WDE while Westbourne Motorsport’s James Dorlin (Barnsley) has taken over at the top of the Graduates Cup standings (for young, first-year drivers) from Pyro’s Nathan Harrison (Oxford). Rivett leads the Masters Cup table for older drivers.

As in the opening rounds at Brands Hatch, both the UK Clio Cup’s qualifying and race lap records around Donington tumbled – thanks in part to the faster Michelin tyre the championship now runs on.

The honours respectively fell to WDE’s Dan Zelos (Dereham) and DRM’s Daniel Rowbottom (Kidderminster) who – just as at Brands Hatch – were among the newer names to star. Indeed Rowbottom ran in second place in race one before hitting problems but recovered with a fine fourth in race two.

Ciceley’s Sam Osborne (Worksop) – fifth in race one – also impressed as did Harrison who took a maximum score in the Graduates Cup on his first outing with Pyro. SDR’s Shayne Deegan (Cambridge) qualified second fastest to Zelos and led the sprint to the opening bend in race one only to become involved in a spectacular incident that sadly eliminated a number of runners. Meanwhile both Dorlin and Pyro’s Jack McCarthy (Bromley) carried on their classy form from their sensational debuts at Brands Hatch.

Finally the Renault UK Clio Cup paddock’s thoughts and best wishes are very much with British F4 Championship Certified by FIA competitor Billy Monger and his family after he was taken to hospital after suffering leg injuries in his race at the same event.