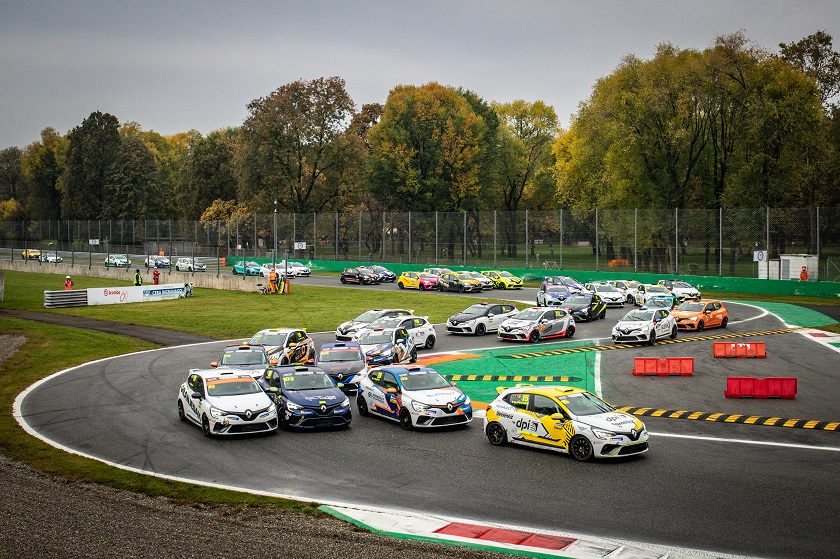 More Clio Cup and Clio Rally5 drivers were crowned during a weekend full in action both on the track and in the special stages across Europe!

The penultimate round of the Clio Cup Europe season, with nearly fifty Clio Cups in action at the Autrodromo Nazionale Monza, saw Frenchman Nicolas Milan and Italian Felice Jelmini share the spoils.

Leader of the general classification coming into the weekend, Nicolas Milan took a big step towards the title as he widened the gap to rival David Pouget. They are the final two drivers in the fight for the crown ahead of Barcelona as Marc Guillot is now mathematically eliminated. However, the latter collected title trophies in Groups A and C, just like Milan Competition on the team side. Meanwhile, Filippo Berto and Alessandro Sebasti Scalera sealed their respective titles in the Challengers Cup and Gentlemen Drivers Cup in Group A, while these categories were already clinched up by Jerzy Spinkiewicz and Lionel Viguier in Group C.

Eleven titles, including three in Clio Cup Europe and four in Groups B and D, remain at stake at the season-finale in Barcelona, where more than forty cars are expected to compete.

Next round: Circuit de Barcelona-Catalunya (12-14 November)

The final round of the 2021 Clio Trophy France Asphalt season was halted after three stages by a horrific storm in the Cévennes. Guillaume Canivenq claimed his second victory in particularly tricky conditions on the Critérium des Cévennes.

Romain Di Fante, who had already won the title, finished third behind Thomas Chauffray. His result allowed Naudon Rallye Services take top honours in the team category. After winning the overall title and finishing as the best Junior and first in the Power Stage Trophy, the driver from Nice will continue his adventure with the La Rochelle-based structure as part of its official Clio Rally4 programme in the 2022 French Rally Championship.

Margot Dupuy and Dominique Patenotte won respectively in the Female and Gentlemen categories to confirm their honorary titles in these classes whilst Groupe Bertrand completed the year’s list of winners in the Challenge Réseau Renault.

Staying with the Critérium des Cévennes, Clio Rally4 and Anthony Fotia set the pace. The 2020 Clio Trophy France title winner dominated the three special stages to win by 35.3 seconds over his predecessor Boris Carminati, in another Clio Rally4. With their performance on tricky roads, the two finished second and fourth respectively in the two-wheel-drive category, only preceded by RGTs. The Europe Location duo also finished in the overall top ten of this round shortened by the inclement weather.

Meanwhile, Romain Di Fante kept the lead of the French two-wheel-drive Rally Championship, where he will try to wrap up another title during the season finale in the Var. Margot Dupuy also scored her maiden win in the French Women Rally Championship as she finished ahead of two rivals entered in cars in the upper category.

The first edition of the Challenge Philippe Bugalski also crowned its champion. While Pierre Loustalniau won the three special stages contested at the Critérium des Cévennes to win by 32.5s ahead of Stéphane Ciaramitaro, both finished behind Thomas Anacleto in the final general classification dominated by three Clio S1600s.

The Rallye Épernay Vins de Champagne, an event counting for the French Rally Cup and the French second division championship, saw the Clio Rally4 of Fabrice Martin and Candice Desrayaud win in its category. At the same time, the battle for the victory in RC5 turned to the advantage of Sylvain and Nicolas Fouteret for 8.7s ahead of Jérôme Janny & Clément Gutierrez and 48.6s better than Mathieu Walter & Thibaut Raincourt, who set the pace for most of the rally before losing the lead with three stages to go.

Still in France, Florian Picchioni and Thibault Glasson-Blanchet also won the RC5 at the Rallye de la Noix de Grenoble, as did Mihai Dumitrescu and Bogdan Nițescu at the Raliul Bucovinei in Romania and Vitalii Antonov – Christiaan van der Rijsen at the Twente Rally in The Netherlands. Meanwhile, the crew of Manuel Hernández Padrón and David Bethencourt took their Clio Rally5 to the second step of the podium at the Maspalomas Rally in the Canary Islands.

For the season finale of the Italian Rally Cup, Davide Nicelli and Tiziano Pieri excelled as they have done throughout the year in Clio Trophy Italia by dominating the R1 class. Lastly, Jiří Rybák from the Czech Republic earned himself a third consecutive podium with Clio Rally4 codriven by Vítězslav Bađura to third place in his category while also securing seventh place in the Rallysprint Championship at Partr Rally Vsetín.

This week, another national trophy will conclude with the final round of the Clio Trophy Belgium’s inaugural season on the Rallye du Condroz (5-7 November). Gilles Pyck will start with a slight advantage over Benoit Verlinde while the fight for third place will be in full swing between Tom Rensonnet and his rivals.

Rallye La Nucía-Mediterráneo will host the penultimate round of the Clio Trophy Spain. Jorge Cagiao, who has moved back into the lead in the general classification, will look to extend his lead over the chase group currently led by Diogo Gago and Germán Leal.