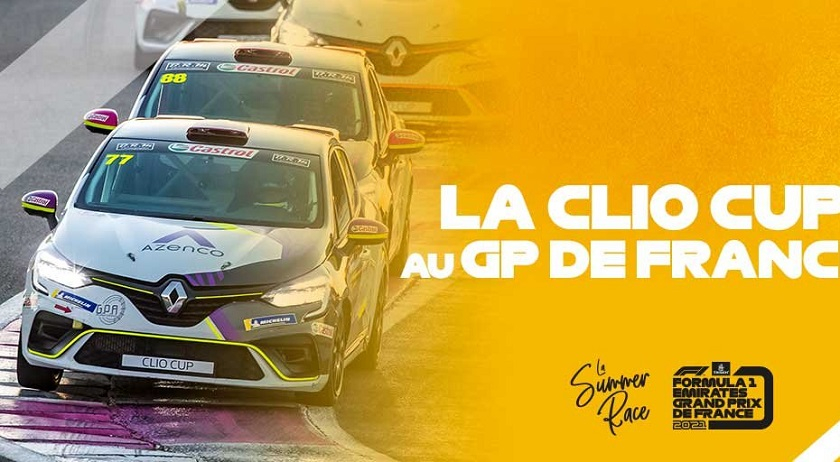 Clio Cup Europe competitors will have the honour of competing in support of the prestigious Formula 1 Emirates Grand Prix de France 2021 (18-20 June) for the sixth meeting of their 2021 season.

As a privileged partner of the GIP Grand Prix de France - Le Castellet since its return to the FIA Formula 1 World Championship, the Renault Group is renewing its support for one of the most important sporting events of the year in France.

In 2019, the Clio Cup Open which brought together nearly 50 drivers from Europe, Asia and the Middle East was a massive success, with start-to-finish battles in front of an enthusiastic public. The same format was also on the bill of the 2020 event but it eventually did not go ahead in light of the coronavirus pandemic.

Patience being a virtue, the Clio Cup will rejoin the pinnacle of motorsport this year with its new European format inaugurated for its 30th anniversary.

One of the most spectacular categories in the world promises once again some of the best bumper-to-bumper racing in the sport. Sixty-six of the best specialists in the discipline have already competed in the first four meetings of the calendar at Nogaro, Monza, Magny-Cours and Hockenheim.

Heir to the single-spec cups created with the launch of the R8 Gordini Cup in 1966, the Clio Cup is based on three fundamental pillars: performance, reliability and affordability. This simple recipe has resulted in particularly full grids and intensely competitive races. The success has continued since the introduction of the fifth-generation Clio Cup in 2020.

The addition of this new round will result in slight changes - detailed below - to the Clio Cup Europe calendar as the event held at Circuit Paul Ricard will also count for Groups B and D.

Benoît Nogier, Alpine Racing Commercial Racing Director: "Since the return of the French Grand Prix to the F1 calendar, the Clio Cup has been a pleasure to watch on track. We are delighted to return this year to celebrate, alongside our Formula 1 team, the 30th anniversary of the Clio Cup and its new truly European philosophy bringing together the top talents in the category. This event on our home turf allows the public to watch intense and lively racing and our competitors an opportunity to compete in one of the world’s most prestigious and exceptional events. We are already looking forward to it!"

Eric Boullier, GIP Grand Prix de France – Le Castellet Managing Director: "We are delighted to welcome back the Clio Cup Europe as a support race for the French Formula 1 Grand Prix. After the change of the initial date of our Grand Prix, I would like to thank the Alpine Racing and French Grand Prix teams for their reactivity to add this fantastic category to the event programme. We are sure that the spectators will enjoy this fabulous show at Circuit Paul Ricard."