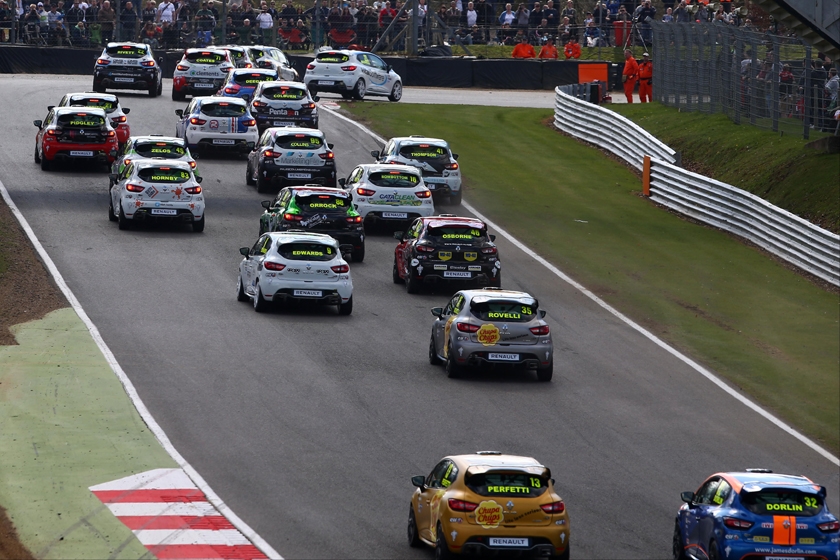 Shawn Taylor will fly the flag of his native Norwich when he contests the remainder of the 2017 Renault UK Clio Cup – starting at the championship’s next two rounds at Donington Park (Sat 15/Sun 16 April).

Taylor, who has past experience of racing motorbikes and saloon cars, will be run by his own STR Norwich team. His car will appear in green, yellow and black – colours synonymous with his home city.

The 45-year-old’s appearance means the UK Clio Cup’s Donington Park entry is currently at 25 cars – the biggest seen to date for the ‘fourth generation’ Clio Renault Sport 220 Trophy model that has been used by the championship since 2014.

The two races at the Leicestershire circuit are the latest on the 2017 UK Clio Cup calendar. There are 18 in total during the season (two of them at Taylor’s home track of Snetterton in late July) and all of them take place at the British Touring Car Championship’s high profile events – cue massive trackside crowds plus live coverage on ITV4.

Taylor commented: “My company STR specialises is engineering high performance and prestige vehicles and when I previously raced in production saloons we prepared the car ourselves. It will be the same this time but of course this is at an altogether different level in terms of competition.

“The most important thing for me is having fun. The type of racing in the Clio Cup certainly guarantees the fun and there’s the Graduates Cup class for the older drivers which I qualify for so hopefully I can find a few people to race in that.

“The championship is professionally regulated meaning all the drivers have the same piece of kit and are competing on an even footing. I am jumping in feet first – many of the drivers are less than half my age and with big career aspirations so there’ll be a lot to learn but, for me, this is the best place to learn.”

Will Fewkes, Renault Sport’s UK Motorsport Championship Manager, said: “We very much welcome Shawn to our grid which continues to grow in size – indeed for Donington Park we are potentially looking at the biggest UK Clio Cup grid since September 2013.

“Consider, too, that two drivers from the Masters Cup class for over-34s which Shawn qualifies for (Lee Pattison and Paul Rivett) are currently inside the top three in the championship outright. It goes to show that experience – not just speed and bravery – still very much has a role to play!”