Florian Bernardi doubles up on Lyon-Charbonnières 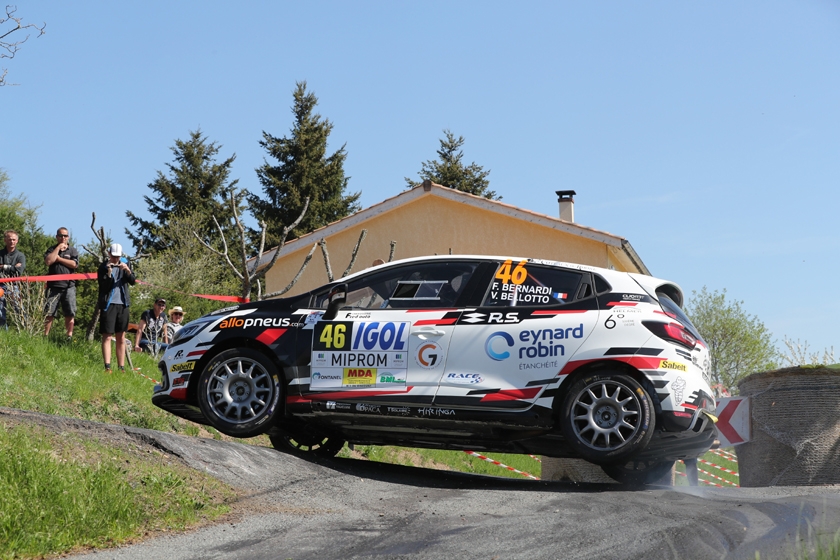 Clio R3T Trophy France leader, Florian Bernardi backed up his Touquet win with another triumph on the roads of the Rallye Lyon-Charbonnières-Rhône.

With a strong run of stage wins, the 2017 runner-up takes the laurels ahead of “newcomer” Boris Carminati and Thibaut Poizot, who picked up his second podium finish.

On Friday, ideal conditions welcomed the debut of the 70th Rallye Lyon-Charbonnières-Rhône. Following the neutralisation of the opening special stage by one of the French Rally Championship contenders, Florian Bernardi posted best time on SS2 to take the lead ahead of the new entry in the Clio R3T Trophy France, Boris Carminati.

Behind the leading duo, it was a tight battle for third place with less than ten seconds separating Thibaut Poizot, Mathieu Walter, Damien Tozlanian and Olivier Delaporte.

While Florian Bernardi set best time on the three evening stages, the native of Vaucluse had just a 17.2s advantage from Boris Carminati at the end of day one. Third at 38.8s, Thibaut Poizot was only 4.7s ahead of Olivier Delaporte, while Mathieu Walter and Damien Tozlanian remained in contention. On the other hand, the rally was over for Guillaume Jean, who went off the road on SS3 and Yann Mogno, who had a technical issue prior to the Charbonnières superstage.

On Saturday, Florian Bernardi picked up the pace and ran the table on the first loop. The leader in the general classification got the better of Boris Carminati on three occasions and Olivier Delaporte once to relegate Boris Carminati to nearly a minute. At the same time, the battle for the podium continued on. On SS8, Olivier Delaporte moved into third place at the expense of Thibaut Poizot, who now trailed his rival by 31.2s.

The start of the afternoon was a turning point. Florian Bernardi set his last best time on SS10 before going into management mode. For his part, Olivier Delaporte’s hopes for a podium result faded with a mechanical problem while Julien Brégeon had his “Charbo” come to a premature end when his co-driver began to suffer from dizziness.

At the finish, Florian Bernardi sealed his second victory of the season ahead of Boris Carminati, who put in a solid drive in his first appearance in the Clio R3T in posting fastest time on the final three stages. The highest placed Junior, Thibaut Poizot completed the podium. Fourth went to the always consistent Damien Tozlanian.

Mathieu Walter rounded out the top five ahead of José Javier Perez, Florent Joly, Jérôme Aymard (1st Gentleman) and William Pitot, while Dominique Patenotte had to retire on the final stage.

In the R3 category, the intense duel between Cédric Robert and Emmanuel Guigou animated the opening day that concluded with a 7.4s advantage for the reigning Clio R3T Trophy France champion. The battle definitively turned in his favour when Emmanuel Guigou suffered a puncture on the first special stage on Saturday.

The next round of the Clio R3T Trophy France will coincide with the Rallye Aveyron Rouergue Occitanie (July 6-8).

Florian Bernardi: “I am very happy to extend my championship lead with this win. It was important to be in it with a shot at the win starting with the short leg on Friday. My plan was to pick up the pace Saturday morning to extend the lead and pull away from some of my less experienced rivals. Everything went according to plan and now I have a bit of a cushion in case I make a mistake. I hope to be able to keep the momentum going on the Rouergue and Mont Blanc, the next two rounds, which also happen to be two rallies I like the most.”