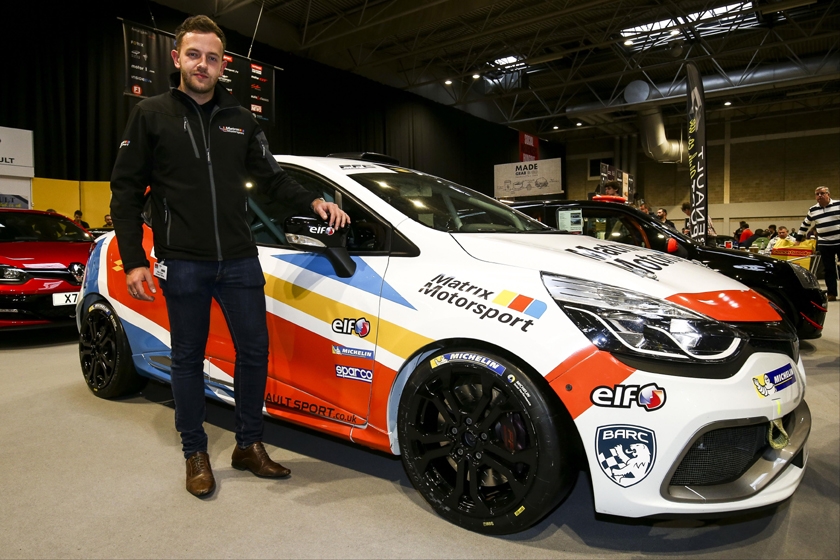 Michael Epps (Hemel Hempstead), who last year raced in the British Touring Car Championship, will this season compete instead in the Renault UK Clio Cup for new team Matrix Motorsport.

He commented: “It makes complete sense for me to step over from the BTCC to Clio Cup this season. The championship is super competitive and keeps a driver sharp – it’s no coincidence that many of the top names in touring cars have come from the Clio Cup. It was the logical choice…

“Plus I’ve looked at the various opportunities the Matrix operation presents – its plans and its potential really stood out. Therefore, I’m excited to be involved and confident I can help the team achieve its targets. This includes its development in the Clio Cup and the prospect of a BTCC campaign in the future.”

Epps continued: “I had my first run in the Matrix Clio Cup car at Snetterton last week and it’s clear the team has everything in place which is very impressive for a new operation. I have a strong working relationship with team manager Dave Hayes and data engineer Ryan Brock from previous campaigns and I immediately felt comfortable in the car, so everything just gelled. I can’t wait for the season to begin!”

Jeff Alden said: “We are delighted that Mike has agreed to join us and we extend a very warm welcome to him. This means we have another front-runner and potential race winner with us. Consequently, I believe we’re in with a real shot at the title.

“I know it’s our first season in the Clio Cup, but we’re determined to make our presence felt and do the best job we can for everyone involved. Exciting times ahead!”

The 2018 Renault UK Clio Cup gets under way with its opening two rounds at the famous Brands Hatch circuit in Kent on Sat 7/Sun 8 April. All 18 of its rounds will take place at the British Touring Car Championship’s high-profile events meaning it appears in front of huge trackside crowds (38,500 on average in 2017) and also live on ITV4.

Renault Sport’s UK Motorsport Championship Manager Will Fewkes added: “The great names just keep on coming for the season ahead. Michael impressed many in the BTCC and it will be interesting to see how that race craft translates into results for Matrix and himself in the Clio Cup.”