For 120 years, Renault has made your life easier 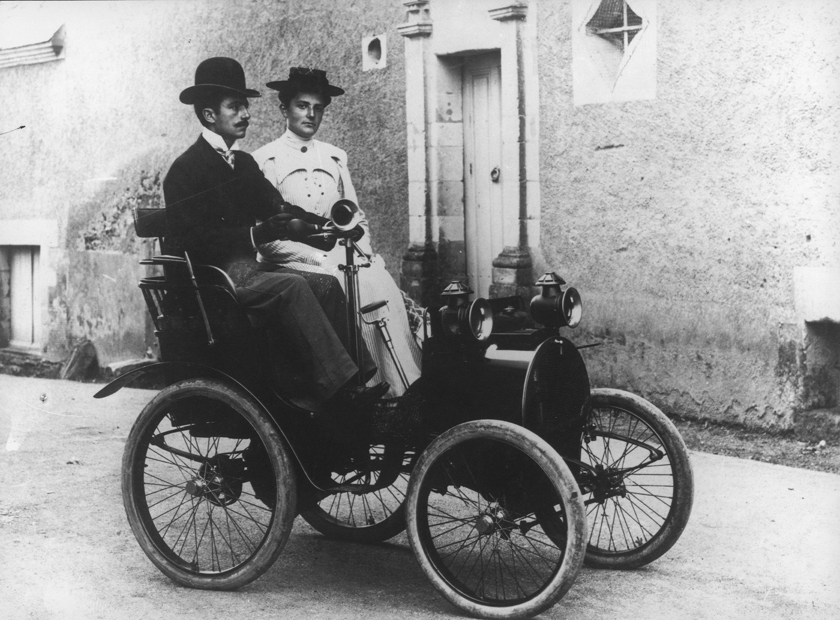 By offering ever more innovative solutions, Renault has long been reinventing the way people make use of vehicles. From placing the driving position inside the vehicle to inventing the minivan, Renault has always simplified and improved passengers’ lives. Renault has constantly adapted to the demands of each era, meeting its customers’ new needs.

For Rétromobile classic car show 2018 in Paris, Renault is exhibiting twenty vehicles from its past that represent and celebrate 120 years of innovative solutions designed to simplify people's lives.

Renault Type A - 1898
It all began in 1898, with the Type A, Renault’s first vehicle. On his buggy-like car, Louis Renault drove up Montmartre hill along the steep street Rue Lepic. The vehicle’s innovative direct-drive gearbox and front-end engine gave the Type A features of today’s cars. Enthralled by its driving simplicity and lightness, onlookers on Rue Lepic placed their orders. The Type A was not originally intended for sale, yet this embodiment of Louis Renault’s bold, pioneering spirit it sparked the firm Renault Frères.

Renault Type B – 1899
Wanting to make sure his customers were comfortable, Louis Renault introduced the Type B, often considered to be one of the world’s first cars with an interior driving position. While offering features of the Type A (direct-drive gearbox, driveshaft transmission), the Type B was a more powerful model. Its closed bodywork protected passengers from bad weather: users could do without their fur coats, which had been vital for driving in wind, rain and snow.

Renault Type BD Postal Van - 1909
Originally designed to modernize the fleet of antiquated horse-drawn omnibuses, the Type BD became the brand’s first three-ton vehicle. Its cardan-shaft transmission and new BD chassis made it a reliable, resistant heavy-goods vehicle. The model was also praised by professionals on the move, used to traveling to meet customers and offer them their products and services. The vehicle exhibited – a postal van – would transport mail and help distribute it. With its protected counter, it simplified the lives of both customers and postmasters.

Renault Type AG1 - 1910
The Type AG1 was the first Parisian taxi. Simple and sturdy, AG1 would transport users while letting them enjoy sunny weather with its innovative convertible-top cabin. In 1914, the Type AG1 was nicknamed “The Taxi of the Marne” in a nod to its contribution to the war effort around the River Marne in France. It was used to carry soldiers to the front line by the Marne. Practical to maintain and specially designed for fleets’ requirements, the Type AG1 helped make Renault a worldwide success.

Renault Type KJ1 - 1923
Following the First World War and the war effort, solutions were needed to meet people’s new requirements. The Type KJ1 helped democratize cars in the 1920s. As an entry-level model, it combined accessibility with high-quality technical features (electric starter, three-speed gearbox, etc.). It was available in a variety of body types, including a cloverleaf-shaped three-seater, an interior driving position, a convertible, and an open tourer to please as many customers as possible while remaining affordable.

Renault Type PR - 1927
A cross between a large car and an LCV, this model was a light, ten-seater coach. Most of the time, these small coaches were used as shuttle buses between hotels and train stations to transport tourists and spa customers traveling by rail. The vehicle thereby enhanced mobility in society at a time when car ownership remained limited. Its top speed was 65 km/h.

Vivastella - 1929
At the start of the 1930s, “stella” was a fashionable word-ending used to evoke high-end finish. The classicism of its lines and the stylish simplicity of its design made the Vivastella an outstanding car that delighted the emerging middle classes and grandees. Adjustable, its could seat up to seven people. The velvet trim and high-quality fabric that embellished the vehicle's interior provided passengers with first-class comfort. With its elegance and its radiator grill sporting a five-branched that became famous, the Vivastella was the most luxurious of six-cylinder Renault vehicles.

Juvaquatre - 1937
The Juvaquatre was Renault’s first model to feature an all-steel body. Stylish and contemporary, it first came in a four-door saloon form. Modest-income families appreciated this version as its could easily seat five people and provided much legroom! Following the Second World War, the Juvaquatre became an LCV serving shopkeepers, public services and artisans. Its manoeuvrability, which made driving easier and more pleasant, and its low fuel-consumption meant that sellers could travel long distances to deliver products to customers.

4 CV - 1947
After the Second Word War, it was time to get France back on track. As such, the 4 CV symbolized freedom. Praised by workers, shopkeepers, and even athletes, it impressed every social strata and all generations. Its slogan – “four doors, four seats, four-horsepower engine” – expressed exactly what made it so popular: its remarkable spaciousness owing to a flat floor and back-end engine. Simple and attractive, the 4 CV helped democratize cars in the post-war period. Sold in over a million units through a new mass-production process, the 4 CV became an integral part of France’s automotive heritage.

Colorale - 1950
Without a doubt, the Colorale was not just Renault’s first SUV but the world’s first one too. Sturdy, large, and practical, the Colorale could tackle all terrains and served artisans, shopkeepers, and farmers. Its height and fold-away sidesteps made loading easy. To suit all situations, it was available in several versions: estate, taxi, van, pick-up, and sheet-covered flatbed truck.

Estafette - 1959
The Estafette was the first Renault model to feature front-wheel drive. The sliding side doors and flat loading surface of this commercial vehicle made loading and unloading easy. With no front bonnet, the driver’s vision was enhanced, improving road safety. Available in several versions, the Estafette suited a wide range of customers, from ice-cream sellers to camping aficionados.

Renault 4 - 1961
The Renault 4 succeeded the 4 CV. Its flat floor, fifth door, and fold-down rear benchseat made it an ingenious, versatile car. Nicknamed “the blue-jean car”, the vehicle offered remarkable road-holding. With no lubrication points and a sealed water system, it was easy to maintain. A worldwide success, the Renault 4 was an affordable, all-round car that perfectly met the demands of its time.

Renault 8 Gordini - 1964
Amédée Gordini modified the “Major” 1108 cm³ engine, transforming the 50-horsepower installation into a more powerful mechanism. He equipped it with a hemispherical combustion-chamber cylinder head and a double-body carburettor supply, turning it into a 95-horsepower engine. The car was unveiled at the 1964 edition of the Paris Motor Show. With its blue body and white strips, “La Gorde” delighted motor-racing fans. The “Coupe Gordini” championship was launched in the same year. Through this competition, the car popularized its legendary status and revealed its true qualities with impressive results. The Renault 8 Gordini helped democratize motor racing.

Renault 16 - 1965
The Renault 16 was a concentration of innovations for customers. Its long-travel suspension made the car especially comfortable for long journeys while its roomy boot gave families sizable stowage space. The vehicle was the first flat-bottom car with a tailgate. Yet beyond the architectural boldness of this two-box model, the Renault 16 was greatly appreciated by the general public for its high-end features like electric windows, central locking, and an automatic gearbox. No-one was therefore surprised when it topped the “Car of the Year” table in 1965!

Renault 5 - 1972
A reference in versatility, the Renault 5 was suited to both the countryside and cities. Contemporary and characterful, it helped draw women and youngsters to the world of cars. Often used as a second vehicle, it was practical and dependable. Available in different versions both in France and worldwide, this “supercar” seduced countless customers.

Renault 30 - 1975
The Renault 30 was revealed at the 1975 edition of the Geneva Motor Show. Its unveiling became a momentous event in the history of technology. It was the first ever car to be widely produced for the general public with front-wheel drive, a V6 engine, a fifth door, and power steering. It championed road safety by incorporating pioneering solutions: a body structure specially designed to protect passengers from the most frequent types of impact and front and rear ends that would absorb impact through progressive deformation.
The model exhibited – the Renault 30 TX – offered many extra features: velvet seat trim, a leather-covered steering wheel, central locking extending to the hatchback door and fuel-tank flap, a remote keyless system, and a “Normalur” device with a dual role as an electric cruise-control system and speed limiter.

Renault 9 - 1981
Revealed at the 1981 edition of the Frankfurt Motor Show, the Renault 9 completed Renault’s offering in a key segment of the European market. The model was intended for customers looking for a versatile, family car with limited running costs. The Renault 9 marked the start of a truly global product policy at Renault. Designed for the European market, the car’s economic qualities gave it international prospects, offsetting the second oil crisis. The Renault 9 was produced throughout the world, including in the US under the name “Renault Alliance”.
A panel of judges made up 52 European journalists made the model “Car of the Year 1982”.

Espace - 1984
In 1984, Renault set a trailblazing path by inventing a new segment of vehicles: the minivan. The Espace was an entirely new concept, designed for “sharing life together”, and became an emblem of cars intended for leisure. With its detachable, interchangeable single seats offering modular adjustability, the Espace was conducive to talks and togetherness. The raised driving position, the flat floor, and the car’s remarkable roominess provided a level of comfort that had never been reached before. With the Espace, Renault foresaw its customers’ desire for comfort. Boosted by the success of this pioneering concept, Renault decided to apply the same spirit of innovation to vehicles that would be more compact in size: the Twingo and the Scénic followed.

Twingo - 1992
In 1992, the public was seduced by the cute look of this compact city car that rewrote the rules of the car industry. The modular adjustabilty offered by its folding rear benchseat increased the space inside the car. The Twingo was fun, colorful, and practical, yet also sweet and endearing. The concept was innovative but simple: a single model, a single engine, a single price, and countless bold colors!

Scénic - 1996
As the first compact minivan in automotive history, the Scénic was immediately adopted by families when it went on sale in 1996. It was French people’s favorite car for many years. The public was enamored by the modularity, storage areas, and pleasant livability it offered. With the Scénic, Renault set in motion a new segment that quickly became a key market in Europe.