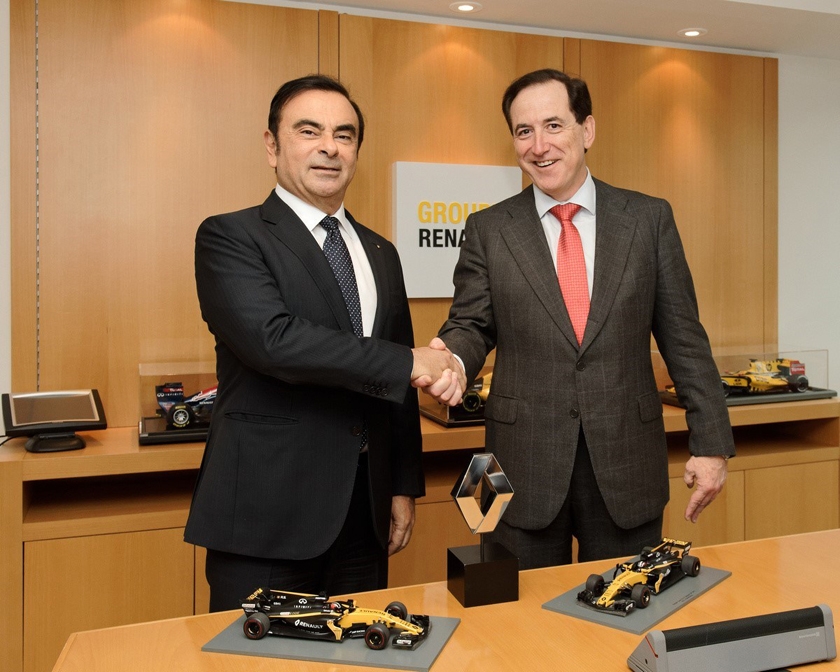 Boulogne-Billancourt, January 31st - After a positive first year of collaboration in 2017, MAPFRE has agreed to renew and expand its agreement with the Renault Sport Formula One Team. The Spanish insurance company will become one of the team’s main official sponsors over the next five seasons.

The agreement, which was presented yesterday evening in Paris at a meeting between the Chairman and CEO of MAPFRE, Antonio Huertas and Renault Chairman and CEO Carlos Ghosn, goes beyond a sports sponsorship; it opens the door to MAPFRE and Groupe Renault exploring additional mobility solutions and services linked to the role of insurance in the future of the automotive industry.

"This agreement with Groupe Renault will allow us to further promote the MAPFRE brand and its values worldwide," explained Antonio Huertas, Chairman and CEO of MAPFRE. “Formula 1 is not just a competitive sport - it is also a testing ground for technological research that can then be expanded to society as a whole. This philosophy fits perfectly with our strategic position for the future.”

“After a positive first season together it’s fantastic that MAPFRE has made a significant further contribution to the team for the future,” added Jérôme Stoll, President of Renault Sport Racing. “MAPFRE is a company which is on the move and we are delighted to continue supporting their brand awareness development at a global level. Our relationship with MAPFRE has highlighted the reach and potential of Formula 1 and the team and this long-term partnership is an opportunity for Groupe Renault and MAPFRE to build new projects together. We look forward to continuing to push for our respective targets over the coming seasons.”

The MAPFRE brand will appear prominently on the nose and sides of both vehicles, as well as on the uniforms and helmets of Spanish driver Carlos Sainz and German driver Nico Hülkenberg,

MAPFRE is a global insurance company with a presence across five continents. The benchmark insurer in the Spanish insurance market, it is also the leading multinational insurance group in Latin America and one of the top ten insurance groups in Europe in terms of premium volume. MAPFRE employs more than 37,000 professionals and services approximately 37 million clients worldwide. In 2016, its revenues exceeded 27 billion euros and its net profit amounted to 775 million euros.

RENAULT SPORT RACING: For more than 115 years, motorsport has constituted an integral element of Renault’s DNA. In Formula One, Renault has started more than 600 races and clinched 11 Drivers’ titles, 12 Constructors’ crowns and no fewer than 173 grand prix victories.
In 2016, spurred on by this illustrious track record and eager to reaffirm its commitment to the sport, Renault launched an all-new entity encompassing all of the brand’s motorsport activities – Renault Sport Racing – and another to manage the development and sale of the Renault Sport Cars portfolio. The key objectives were to promote the company’s passion for motorsport to a wider audience while maximising the technological synergies between its racing and rally and its road-going sports models. As of February 2016, Renault Sport Racing controls and co-ordinates all of Renault's motorsport activities, from Formula One and Formula E, to the Renault Sport Series.Now under the same overall management to cover the staff and facilities at the company's two key sites at Viry Châtillon in France and Enstone in the UK, Renault Sport Racing firmly reinforces Renault's commitment to the motorsport.