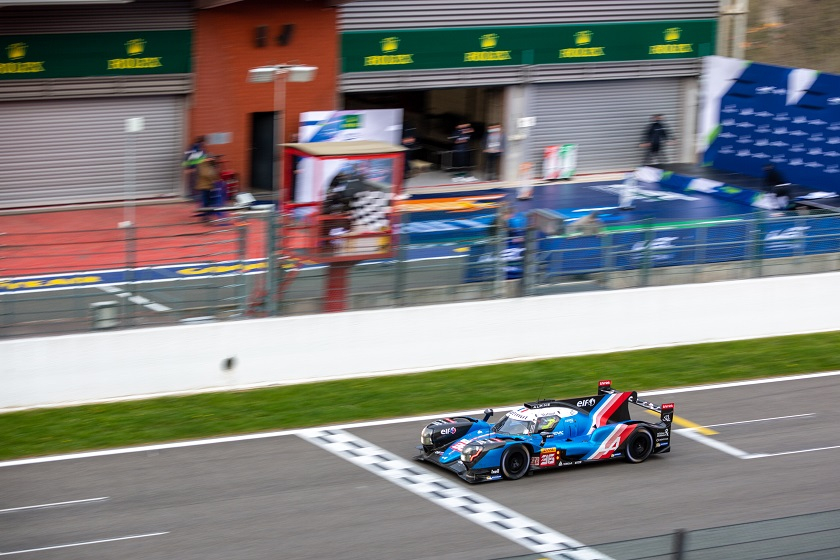 As tradition dictates, the season kicked off with the Prologue on Monday and Tuesday. The Alpine Elf Matmut Endurance Team used these two days of testing to better understand the A480 with Nicolas Lapierre, André Negrão and Matthieu Vaxiviere.

As the sessions progressed, the trio set faster and faster times and completed 190 laps, or just over 1,330 kilometres, with no reliability issues. The team continued to work hard on Thursday and Friday, setting the benchmark time in the second free practice session and added 92 laps to their tally before handing over to Nicolas Lapierre for qualifying.

The challenge of this ten-minute race against the clock became even more difficult when the A480 encountered a sensor problem forcing Nicolas Lapierre to return to the pits. He then went back out for a single lap, which resulted in third place in the Hypercar category.

On Saturday, the tension rose up a notch with the first race of the season. Despite a good start, André Negrão was surprised by two rivals before starting his comeback at the end of the first lap. The Brazilian quickly regained his initial position and was even on the provisional overall podium after 20 minutes before continuing pushing on in his second stint before handing over to Nicolas Lapierre.

With a shift in tactics, the A480 took the lead before the third hour while Nicolas Lapierre combined performance and consistency to consolidate Alpine Elf Matmut Endurance Team's place among the contenders for victory. The crew was about to lead a large portion of the race, alternating with the Toyota.

Shortly after the halfway point, Matthieu Vaxiviere took over and showed his speed by being the fastest on track in his first competitive laps with the Alpine colours. Thanks to the team's exemplary reactivity during the first full course yellow of the race, they kept the leaders under pressure and the n°36 car gained a position when the n°7 Toyota made a trip into the gravel.

With less than an hour and a half to go, Matthieu Vaxiviere returned to the pits to hand over to André Negrão, who had a minor contact with a backmarker. The Brazilian was on the lookout for the slightest opportunity and was in the lead until his final stop with thirty-eight minutes remaining.

Shortly afterwards, a final full race yellow gave the leading Toyota some breathing space, avoiding what could have been a splash-and-dash in the final stretch. Despite all their efforts, the Brazilian and the A480 then finished second, just over a minute behind the winners.

Alpine Elf Matmut Endurance Team now shifts its focus to the 8 Hours of Portimão. The second round of the 2021 FIA World Endurance Championship season will take place on 13 June.

Philippe Sinault, Alpine Elf Matmut Endurance Team Principal "It's been a long and intense week, but we've learned a lot. We had a small issue in qualifying with a sensor sending us the wrong power information, but we bounced back in the race. We had the satisfaction of battling with the Toyotas even though the strategies are obviously different because of the different technologies we use. We anticipated that they would do more laps per stint than us, but we closed the gap by being very reactive in the first full course yellow. We also set a great pace and had a race incident, but that can always happen in a six-hour event. André was very cautious at the start and could not fully make the most of his fine start. We lost about 20 seconds in the process, but he battled back and stayed in contact, as did Nicolas and Matthieu later on. Our first target was to reach the finish, and we did so. Although the podium was predicted by many, we managed to finish second by pushing the Toyotas. The assessment of this first race is positive, and we will work hard to aim higher in Portimão."

Nicolas Lapierre: "We can be satisfied and proud of the incredible work done by the team compared to our competitors who seemed more nervous today. Apart from the slight sensor problem in qualifying, we made good progress throughout the week with a reliable car. We also had a lot of fun behind the wheel even though our limited range was somewhat frustrating. This is among the minor points to be corrected and optimised both by the championship authorities and by us as it was our first race with the A480. It was still a really solid race and the weeks leading up to Portimão promise to be exciting."

André Negrão: "It's been a fantastic start to the season and the fight against the Toyotas is looking really intense. I believe we did a great job, but we need to look at the data as I feel the A480 has even more potential in the window of our balance of performance. My only regret was the minor incident in the race when I made a small mistake in thinking a backmarker saw me and was opening the door. Fortunately, we got away with a small puncture which did not impact the final result."

Matthieu Vaxiviere:  "We worked all week to have a good race, and we managed to do that by avoiding mistakes and penalties. We aimed to catch Toyota, and that's exactly what we did, showing that we are here to fight. We still have some work to do though. I already have a great feeling with the car on a single-lap pace, but I also need to analyse how I can optimise the tyre management. We are going in the right direction and that bodes well for the future. The battle has only just begun!"