Full speed ahead for the Clio Ice Trophy 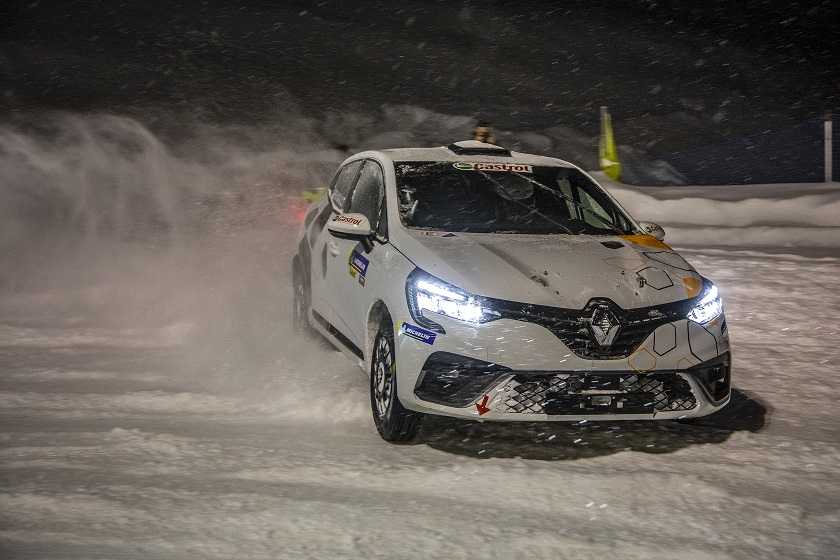 New for 2022, the Clio Ice Trophy will see Clio RX and Clio Rally5 compete on four snow events this winter as part of the Crèdit Andorra GSeries. Eleven drivers are entered for the opening round, scheduled for Saturday 8 January. All are determined to become the first winner in this new discipline.

After a successful launch in its dedicated trophies and open competition, Clio Rally5 will have a new arena to showcase its talents this week when it takes to the powdery terrain of the Clio Ice Trophy. Launched to kick off the 2022 season, this competition will draw on the proven versatility of the fifth-generation Clio, as the Clio RXs run in the French Junior Rallycross Championship will also be in action.

For the inaugural Clio Ice Trophy, the Alpine Racing customer racing department based in Viry-Châtillon is offering the drivers and teams the opportunity to go to Andorra to compete in the Crèdit Andorrà GSeries, a leading ice racing reference in Europe.

In the four-round trophy, boasting as many different layouts of the Circuit Pas de la Casa, the competitors will take part in free practice before moving on to qualifying, and then the finals, which will all take place on the same day. Drivers competing in Clio Rally5 and Clio RX will be ranked in both the Clio Ice Trophy and the Crèdit Andorrà GSeries two-wheel-drive championship.

A specific Clio Ice Trophy classification will be established at each meeting, cumulating the points awarded after qualifying and the final rounds.

ELEVEN ENTRIES FOR THE FIRST-EVER ROUND

Eleven drivers have signed up to take advantage of an unmatched pleasure/cost adventure at a time of the year with not much racing going on to kick-off this inaugural season.

2021 French two-wheel-drive Rally Champion on tarmac with Clio Rally5, Romain Di-Fante will be one of the event's headliners before he focuses on his official programme with Clio Rally4. The French driver will race for the Naudon Rallye Services team with which he won the Clio Trophy France Asphlate crown. The outfit will also enter Corsican rally specialist Pierre-Paul Baltolu,  2019 French Woman’s Rally Champion Pauline Dalmasso, as well as Bryan Dufas, who starred with Clio RX in the French Junior Rallycross Championship, and Mathieu Lannepoundenx, seventh in the 2021 Clio Cup Europe.

The Clio Ice Trophy has also attracted interest beyond the borders of France. Loyal to their family spirit, Belgium’s Koen and Benoît Verlinde have also decided to see what they can do on the ice after their Clio Trophy Belgium campaigns, where the son - Benoît - finishing runner-up.

The Driveland team will rely on Spanish drivers Guillermo Millan and Markel de Zabaleta, who will both get behind the wheel after orchestrating various Renault-branded categories in their country. Lastly, the Catalans from Brunet Competition will enter two French drivers in Arthur Bourion, who follows his father Paul and grandfather Maurice in competition, and Jonathan Arnould.

As is the case in every trophy initiated by Alpine Racing, the Viry-Châtillon customer racing department and the event promoter - Circuit Andorra - will provide a unique framework to ensure sporting and technical fairness, as well as an attractive prize and award scheme. The top five finishers in each round will be rewarded with cash and spare-part vouchers while the first Clio Ice Trophy title-winner and the best woman at the end of the season will win her registration fees for a full season in one of the Clio Trophies in rallying. The second and third-place finishers will also be rewarded.

"We are looking forward to the launch of the Clio Ice Trophy at the Crèdit Andorrà GSeries this weekend. Renault has always strived to make motorsport accessible, and the Clio Ice Trophy concept has immediately appealed to both experienced drivers and ambitious newcomers. Clio RX and Clio Rally5 have proven their worth in terms of performance, reliability and accessibility and we can’t wait to see the incredible show that this fifth-generation can put on on the snow in Andorra." Benoît Nogier, Alpine Racing Commercial Racing Director

THE REGULATIONS IN SHORT

Competitors will be allowed six flying laps in free practice before qualifying. The drivers will then complete a maximum of seven laps. A first classification by points and by driver (15-13-11-9-7-5-4-3-2-1) will be established according to the sum of the times achieved during the four best laps. Meanwhile, a second classification according to the best time achieved by each driver will set the starting grids for the finals as indicated below.

The finals will be a maximum of eight laps, with a standing start. Points will be awarded (25-18-15-12-10-8-6-4-2-1) and will be added to those scored in qualifying. Every driver will participate in a final. If two drivers are in the same final with the same car, the lower-ranked of the two will race in the B Final.

About the Clio Ice Trophy

Introduced in 2022, the Clio Ice Trophy offers spectacular races on ice on the Pas de la Casa circuit in Andorra. As part of the Crèdit Andorrà GSeries, the Clio Ice Trophy draws on synergies within Renault Group, including the experience of Alpine Racing customer racing department based in Viry-Châtillon and the competition department at the Alpine factory in Dieppe. For its inaugural edition, the Clio Ice Trophy will take place over four rounds and as many different track configurations at the same location, where abundant snow and fantastic sliding conditions promise to be the order of the day.