The Alpine A110 scoops prestigious prize at the Festival Automobile International 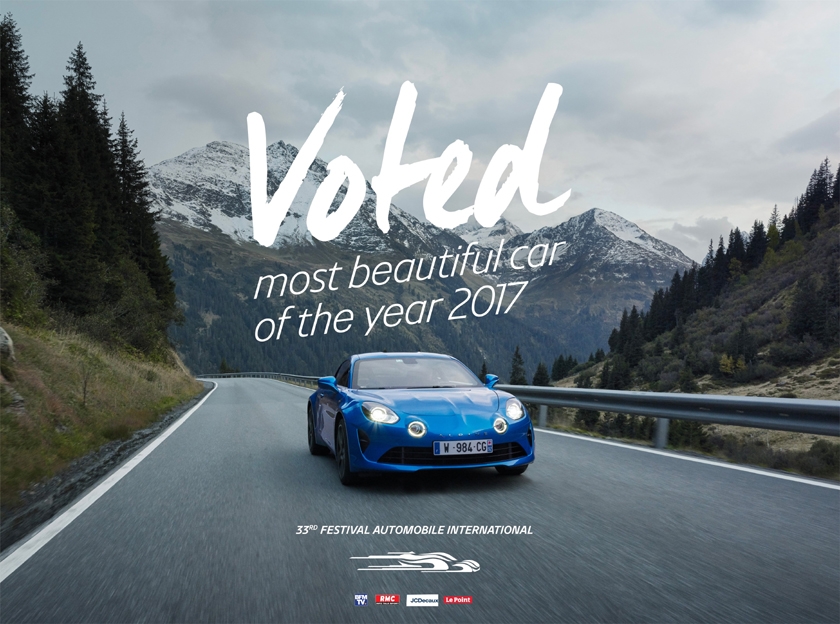 Paris, January 31, 2018: The 33rd Festival Automobile International in Paris, France, saw the new Alpine A110 claim the Most Beautiful Car of 2017 award which was presented to Groupe Renault Chairman and CEO, Carlos Ghosn.

Reviving such an iconic sports car as the Alpine A110 has been an inspiring challenge, the objective being to bestow it with modern technology and expertise while remaining true to the car’s unique heritage,” said CEO Carlos Ghosn. “We are very proud of the passion the new A110 has generated not only at our Dieppe plant in Normandy [France], where it is made, but also across Groupe Renault. This prize is a tremendous reward for all those who, over a period of five years, put so much energy into bringing this symbol of excellence and French-style elegance back to life, Groupe Renault Chairman and CEO, Carlos Ghosn.

The Alpine A110, which was unveiled at the Geneva Motor Show barely a year ago, was singled out as the Most Beautiful Car of 2017 by a public online vote.

This award is also a welcome reward for the untiring work that Groupe Renault’s teams have put in to re-establish this iconic French brand.

The new A110 is an elegant, lightweight, two-seat sports coupé that marks Alpine’s renaissance. In keeping with the brand’s DNA, it places the accent on agile performance and driving enjoyment, without compromising everyday comfort.

Designed and made in France, it features a lightweight aluminium construction and sophisticated double wishbone suspension. The A110 Première Édition is powered by a 1.8-litre, mid rear-mounted, 252-horsepower, turbocharged four-cylinder engine.

The Festival Automobile International’s award is the second to have been won by Alpine after the A110 was named Best Sports Car of the Year at the Trophées Argus 2018 ceremony in December.

Alpine was founded in 1955 by Jean Rédélé, a young man passionate about motorsports. The Alpine name became legendary when the Alpine A110 ‘Berlinette’ won the 1971 and 1973 Monte Carlo Rally. Today, Alpine is back with the new A110, a sports car faithful to Alpine’s timeless principles of compactness, lightness and agility, with one promise: driving pleasure.